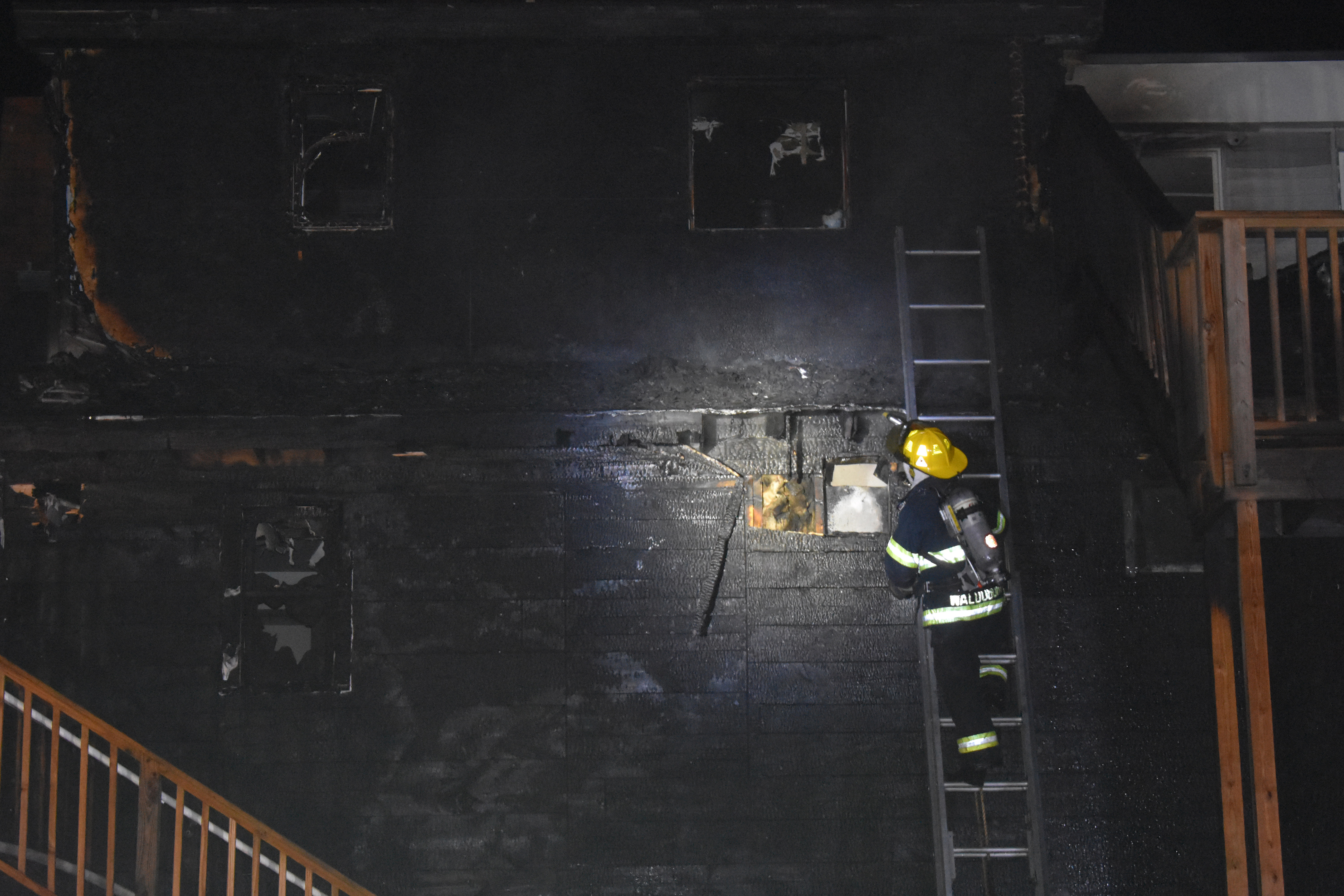 A Waldoboro firefighter at the scene of the structure fire at McGreevy’s Corner Store on the evening of Thursday, Oct. 17. (Alexander Violo photo)

A fire caused extensive damage to the McGreevy’s Corner Store building at Kaler’s Corner in Waldoboro the evening of Thursday, Oct. 17. A person and a cat escaped an apartment above the store, and there were no injuries.

The fire was accidental and the most likely cause was the operation of a generator too close to combustible materials, according to Waldoboro Fire Chief Paul Smeltzer, who cited the findings of the Maine State Fire Marshal’s Office.

Smeltzer said the fire started at the rear of the building, which was without power at the time. Flames had engulfed the back of the structure when the first firefighters arrived.

“It quickly spread inside to the second and third floors,” Smeltzer said.

Firefighters began their attack at the rear of the building and entered the building. “We had the fire knocked down within 10 minutes, but overhaul has been a long process,” Smeltzer said.

Speaking at the scene Thursday night, Smeltzer said crews would continue to search for and extinguish hot spots and would cut through portions of the rear of the building to find the source of heavy smoke coming from the structure after flames were no longer visible.

Smeltzer described the building as an old one that has gone through multiple renovations over the years. Most recently, former owner Daniel Goldenson undertook a large-scale renovation of the property after buying it in 2016.

McGreevy’s has insurance and plans to rebuild, owner Jeanette Wordock, of Round Pond, said the day after the fire. Wordock said she runs the business with her son, Shawn Elliott, also of Round Pond.

When Lincoln County Communications dispatched the Waldoboro Fire Department shortly after 7:30 p.m. Thursday, firefighters were at the station, training on the department’s new ladder truck.

“We were on scene within minutes,” Smeltzer said.

The fire followed what was already a long day for firefighters, due to widespread damage from rain and wind earlier in the day.

Although power to McGreevy’s was out, Central Maine Power Co. disconnected the power anyway in case it came back on during the emergency response, according to Smeltzer.

The Bremen, Damariscotta, and Nobleboro fire departments, along with Waldoboro Emergency Medical Services and the Waldoboro Police Department, responded to the fire.

“I’m very proud of the job the firefighters did,” Smeltzer said.