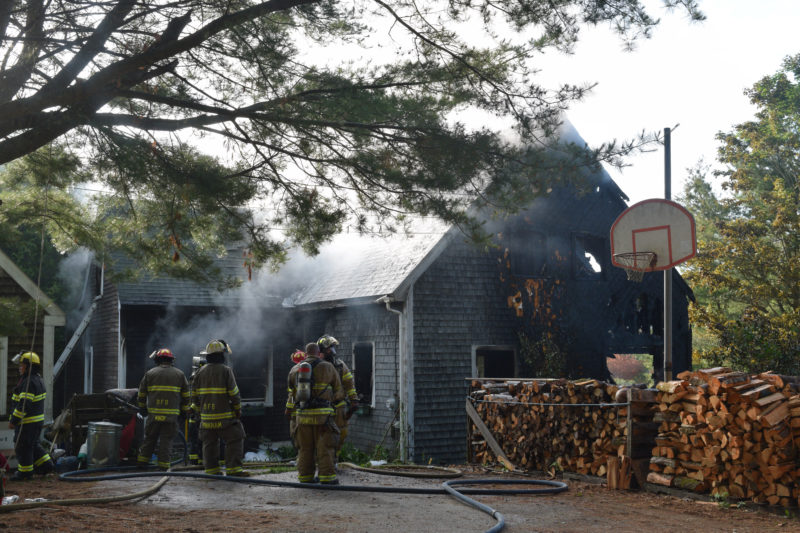 Firefighters on the scene of a house fire at 7 Creek Lane in Damariscotta. (Hailey Bryant photo)

A local musician and teacher has seen support from the community, including an online fundraiser that has brought in more than $65,000, after a fire destroyed her Damariscotta home Saturday, June 27.

There were no injuries in the fire at 7 Creek Lane, which started around 5 a.m., Saturday, June 27. Creek Lane is off Branch Road, which is off Belvedere Road.

Homeowner Kaity Newell, a music teacher at Great Salt Bay Community School in Damariscotta, could see smoke in the house when she woke up Saturday morning. She opened the door to the basement and saw flames, according to Damariscotta Fire Chief John Roberts.

Newell got her two dogs and two cats out of the house safely. No one else lives in the house. 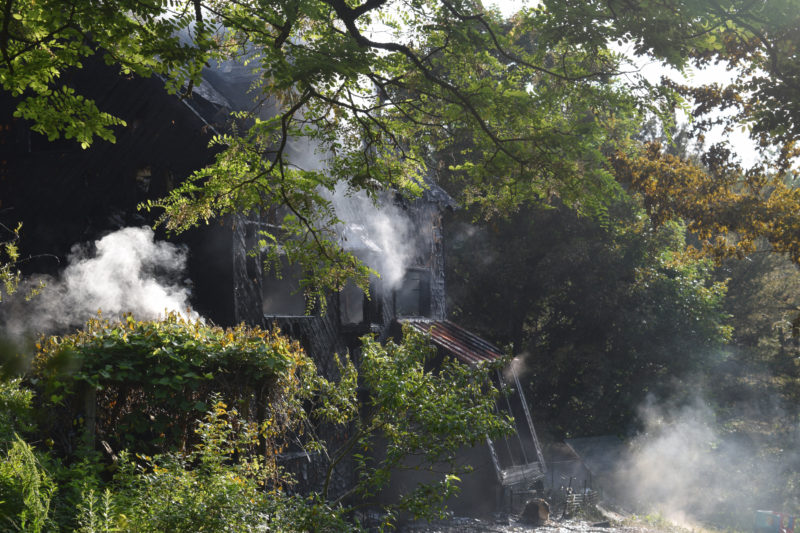 Smoke comes out of the damaged house at 7 Creek Lane in Damariscotta. (Hailey Bryant photo)

When firefighters arrived, flames were coming from the basement and first floor, and heavy smoke from the rest of the house, Roberts said. The damage is extensive and the house will be demolished.

The Maine State Fire Marshal’s Office determined that the fire was electrical and started inside a wall in the basement.

The Damariscotta Fire Department was dispatched at 5:19 a.m. The Bremen, Bristol, Newcastle, Nobleboro, South Bristol, and Waldoboro fire departments assisted. The scene was cleared at 9:45 a.m.

The fire briefly reignited around 1 p.m., producing smoke but no visible flames. It was quickly put out by the Damariscotta Fire Department.

Newell is widely known in the community as a teacher, especially of string instruments, and a performer.

Jenny Begin, a longtime friend of Newell’s, started a GoFundMe campaign the day of the fire, called the Kaity Newell Fire Recovery Fund. She established a bank account with the same name at Bath Savings Institution.

Extensive fire damage on the back and side of the house. (Courtesy of John Roberts)

Begin’s original goal was to raise enough money for Newell to build a new chicken coop. As of 7 a.m., Tuesday, June 30, the GoFundMe has raised $66,675.

“She’s given a lot to the community and people just want to say thank you,” Begin said. Many of the comments on the donation page are from people whose children or grandchildren took violin and fiddle lessons from Newell, and community members who say Newell has brought music and joy to the Damariscotta area.

According to the GoFundMe page, firefighters salvaged Newell’s violin and trumpet, but everything else in the house was lost, including the rest of her instruments.

“Kaity has given so much of her time and talent playing music and teaching at schools and camps throughout Midcoast Maine. She has inspired generations of children to reach for the music,” Begin wrote on the page.