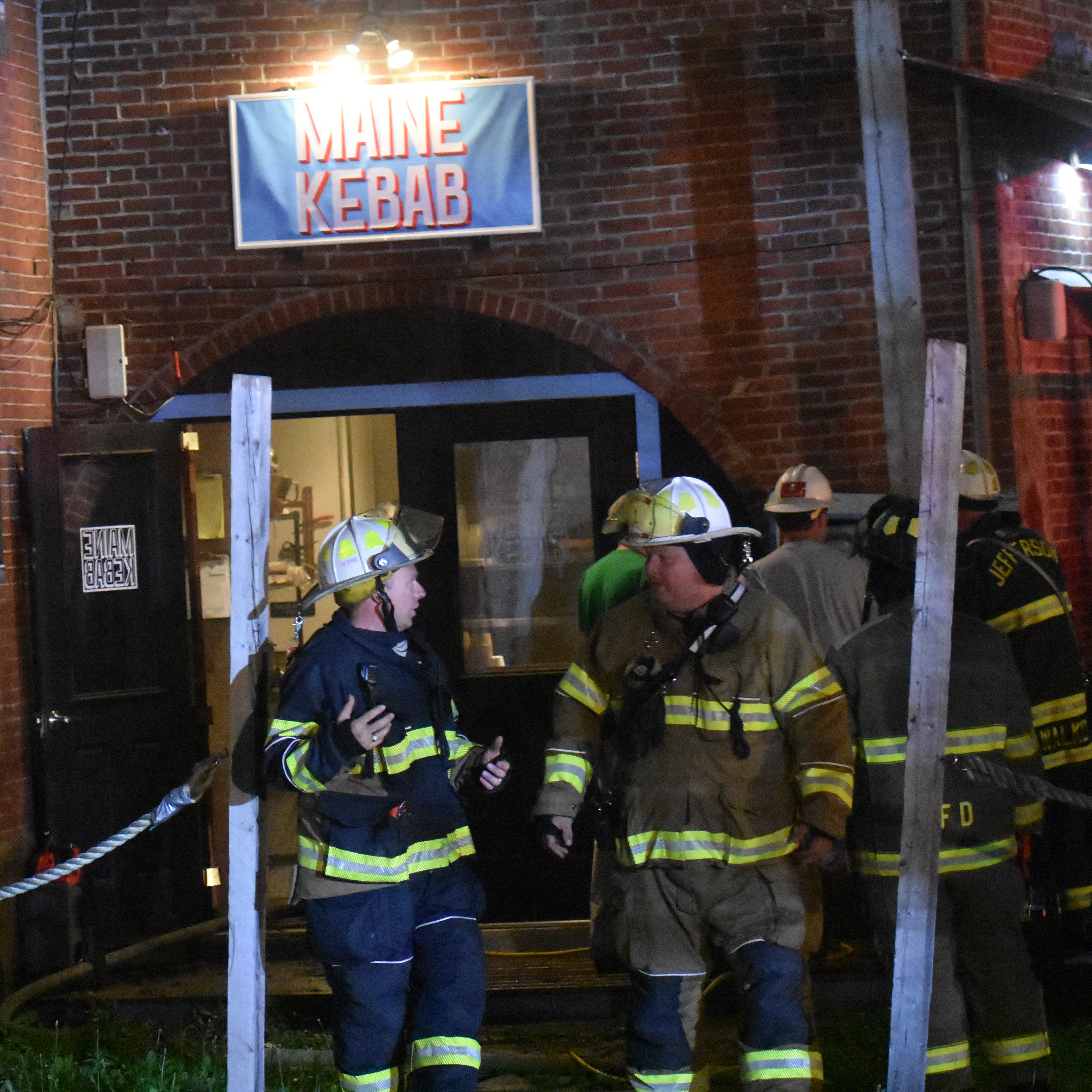 Firefighters on the back side of 9 Friendship St. in Waldoboro, following a fire at Maine Kebab, Wednesday, July 23. (Alexander Violo photo)

A fire at a new restaurant in Waldoboro village early Thursday, July 23 damaged the restaurant and a pharmacy at 9 Friendship St. and forced the evacuation of the four-story building.

The fire started in Maine Kebab, a new restaurant on the back side of the building on the ground level, according to Waldoboro Fire Chief Paul Smeltzer. “All the fire damage is in the restaurant,” he said.

Community Pharmacy of Waldoboro, one floor up and on the Friendship Street side of the building, sustained heavy smoke damage, according to Smeltzer. A representative of the pharmacy later said the damage was not as extensive as initially believed.

Smeltzer said that when he arrived, smoke was coming out of both sides of the commercial block.

“We were toned out to an active structure fire at Maine Kebab and when I arrived on scene I could see smoke coming from the front side of the building and from the rear of the building by the lower level,” he said. “There was smoke all up and down Friendship Street.”

The tenants of apartments in the building were evacuated. Firefighters went into Maine Kebab and knocked the fire down in about 15 minutes.

“We knocked the fire down and accessed all the floors of the building to make sure there was no extension of the fire,” Smeltzer said.

Due to the size of the building, ladder trucks from Damariscotta and Thomaston were dispatched.

“We believe the fire was accidental in nature,” Smeltzer said.

McGarvey reopened Saturday, July 25. “We cleaned up the mess and are taking advantage of being closed to make some improvements today,” McGarvey said Friday, July 24.

The pharmacy was open for curbside pickup Thursday and was going to continue to conduct business by pickup only until Monday, July 27.

“We feel really fortunate; it wasn’t as bad as they initially thought,” said Amelia Arnold, pharmacy operations manager. “We are here and feel so fortunate. It could have been much worse.”

“We’ve had fans going and we had a professional cleaning company come in. We’ve been able to still serve everyone today. We’ve been open for curbside pickup. We are trying to keep people out of the store for now, but Monday we hope to be back to normal,” Arnold said.

Quick thinking and good timing on the part of a chef at Maine Kebab, Ken Hynes, helped contain the fire.

Hynes, of West Rockport, said he returned to the restaurant at 1:13 a.m. to pick up two buckets of leftover vegetables for his two young pigs. He had left at 10:30 p.m. Wednesday.

“When I got back, I looked in and it looked steamy inside, but it was rainy and I thought it was just moisture on the inside of the windows,” Hynes said.

However, when Hynes opened the doors to the restaurant, he discovered a lot of smoke and the fire in the back of two chest freezers.

“I opened the door and there was a huge billow of smoke. I saw a pipe burst and there was a lot of water. There were 3-foot flames coming out of the back of the chest freezers,” Hynes said.

Hynes was able to smother the flames with a floor mat. He used a trash can to collect water to dump on the fire, reducing it to embers by the time firefighters arrived. He estimated that the first firefighters responded about 10 minutes after he entered the restaurant.

Debris was everywhere and “it was full of smoke,” Hynes said.

Hynes was previously head chef at 40 Paper, a restaurant in Camden. He has been helping McGarvey open his new business.

Hynes said he was not wearing shoes during his response, as he was just expecting to run in and get the vegetable scraps.

“I feel lucky I got there when I did. It’s an old building with a lot of exposed wooden beams,” he said.

Maine Kebab called Hynes a hero in a Facebook post and credited him with saving the downtown “and several people’s lives.”