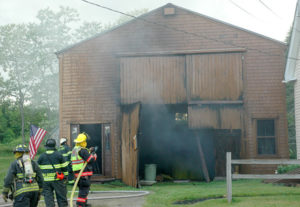 Firefighters were able to prevent a boathouse fire from spreading to a house only feet away, at right. (Alexander Violo photo)

A fire badly damaged a boathouse at 2751 Friendship Road in Waldoboro the afternoon of Wednesday, June 22. No injuries were reported. 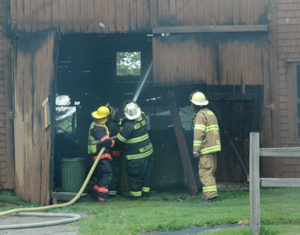 Local firefighters work at the scene of a boathouse fire on Friendship Road in Waldoboro. (Alexander Violo photo)

“The firefighters did one heck of a job preventing this fire from spreading to the house,” Waldoboro Assistant Fire Chief William Maxwell said.

Maxwell said that when he arrived, the rear end of the structure was fully engulfed in flames and heavy smoke, and some flames were showing at the front end.

“There was quite a bit of heavy damage since there were a lot of tools and machinery in the workshop,” Maxwell said.

He said the most significant damage occurred near the rear of the barn in a boatshop area.

“The workshop area is completely gone. I’d say the rear quarter of the building suffered the most severe damage,” Maxwell said.

The assistant fire chief said the cause of the fire is unknown at this time. He has notified the Maine State Fire Marshal’s Office, but does not believe the fire was suspicious.

He estimated it took 30-40 minutes to get the blaze under control and just over an hour to completely knock down the fire.

Maxwell said the Maine Department of Environmental Protection responded because a full 250-gallon fuel tank behind the structure was leaking. He said heat from the fire ruptured the tank and DEP employees pumped the fuel into holding tanks.

Officials cleared the scene around 8 p.m.

Gary and Sheila Delano own the building, according to Maxwell. He did not know whether it was insured.