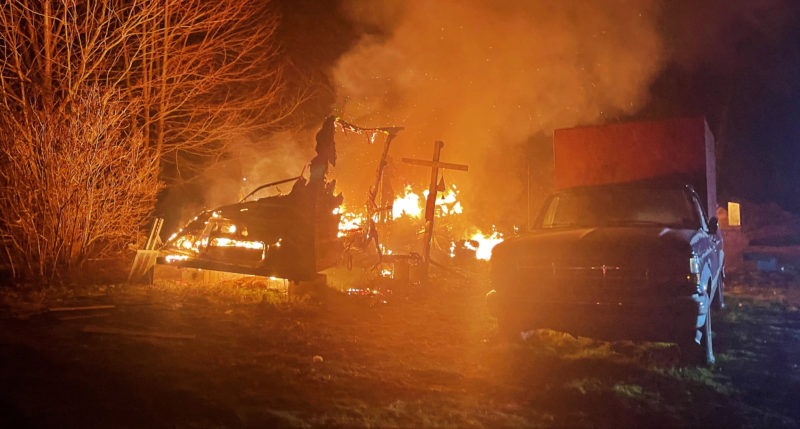 A camper trailer is completely engulfed in flames on Old County Road in Waldoboro in the early morning hours of Dec. 9. (Courtesy photo)

A fire engulfed a camper trailer on Old County Road in Waldoboro on Thursday, Dec. 9, burning it completely.

The call came in to the Waldoboro Fire Department at 1:25 a.m., which arrived at the scene shortly after. The towns of Bremen, Jefferson, Friendship, Warren, Union, and Damariscotta also responded to provide water tanks and manpower in putting out the fire.

The camper trailer was completely engulfed by the time firefighters arrived. The agency’s response time was hindered by slippery roads, and firefighters focused their response on the fire nearing propane tanks next to the burning structure once they arrived, according to Waldoboro Fire Chief Paul Smeltzer.

About 20 firefighters assisted on scene.

A single resident was staying in the camper at the time, and had left the trailer before the fire department arrived. He was transported to LincolnHealth-Miles Campus in Damariscotta by Waldoboro EMS to be checked out.

The cause of the fire is still under investigation.