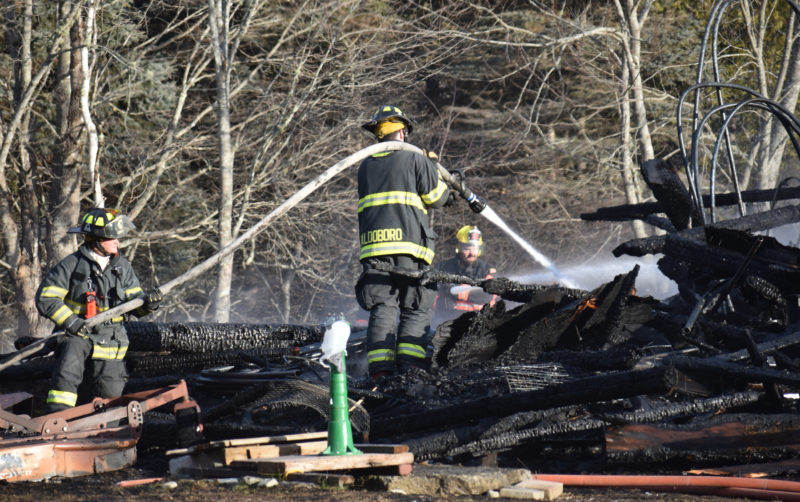 Firefighters work in the rubble of a 2 1/2-story barn in Waldoboro the morning of Saturday, Dec. 15. The structure was a total loss, according to the fire chief. (Alexander Violo photo)

Fire destroyed a 2 1/2-story barn at 130 George Luce Road in Waldoboro the morning of Saturday, Dec. 15.

There were no human injuries, but a goat died in the fire. The family pet was the only animal inside the barn when the fire started, according to Waldoboro Fire Chief Paul Smeltzer.

The cause of the fire could not be determined due to the extent of damage, Smeltzer said, but the fire was ruled accidental and nothing suspicious was discovered.

The barn was fully involved when firefighters arrived, according to Smeltzer. He said he could see flames while driving on Route 220 toward the fire and called for help from neighboring towns.

A power line slowed the initial response to the fire. Firefighters started a defensive attack to keep the fire from spreading, according to Smeltzer.

A tanker shuttle brought water to the scene. Smeltzer thanked neighboring departments for their timely assistance.

The 2.5-story barn was not connected to any other structures on the property, at the end of a dead-end road off Friendship Road.

The homeowner was outside around 7 a.m. and everything was fine. Around 7:30 a.m., the fire was discovered, according to Smeltzer.

Mary L. Ashmore owns the property, according to municipal tax records. The barn stored equipment such as lawnmowers, in addition to housing the goat, according to Smeltzer.

Smeltzer consulted with the Maine State Fire Marshal’s Office, but the agency did not respond to the scene.