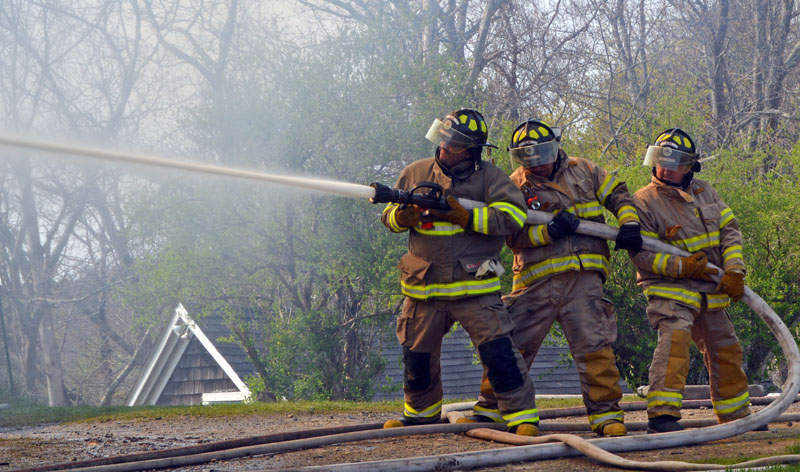 Alna firefighters work on the scene of a house fire at 38 South Dyer Neck Road in Newcastle in May 2016. The Lincoln County Fire Chiefs Association is developing a firefighter strike team to assist with major events. (Maia Zewert photo, LCN file)

The Lincoln County Fire Chiefs Association is in the process of creating a strike team of firefighters from departments across the county to respond to major incidents and provide additional manpower around the county.

While a strong mutual aid system is already in place, low membership numbers can sometimes result in a shortage of manpower on scenes, according to Bristol 1st Assistant Fire Chief Jared Pendleton.

The Lincoln County Firefighter Strike Team would provide a pool of firefighters who would respond to major events, such as structure fires or mass-casualty incidents, and provide assistance wherever needed, Pendleton said. The members of the strike team would respond by traveling at normal speeds in their personal vehicles, providing a “quiet movement of manpower” across the county.

Once the team arrives on a scene, members would help wherever needed, doing everything from firefighting to rolling up hoses and doing scene cleanup, Pendleton said.

“The strike team will be there to show support and help wherever they are needed,” Pendleton said. “When there are these big events where you’re on scene five or six hours at a time, we all know it can get exhausting. To have a resource of fresh manpower arriving could be a huge help in these major events.”

While similar arrangements have existed in the past, Pendleton said he began pushing for an official team after the winter of 2015, when four major structure fires took place within a week in the northern Lincoln County towns of Jefferson, Somerville, and Whitefield.

“Those guys were going through a major event night after night, and by the end of it, they were exhausted, and a lot of us felt bad because we couldn’t help them because we didn’t know how to help them,” Pendleton said.

Pendleton praised the fire departments in the county for the strong mutual aid and support they provide, but said various factors can affect the availability of volunteers.

“The way it is right now, if there’s a fire in the middle of the day and you need mutual aid, you’re typically going to get a couple guys and a truck from each town. Pretty soon, you’re going to have too many trucks on scene, but not enough people,” Pendleton said.

With volunteer firefighter numbers down across the country and the average age of firefighters going up, the lack of additional manpower could result in a disaster, Pendleton said.

“The firefighters we have are extremely committed, but we know it’s a dangerous, stressful job, and it is possible to overdo it when you’re on scene for hours at a time. We don’t want someone to get injured or worse,” Pendleton said. “We feel very strongly about our firefighters’ safety, and this is something we want to be proactive about, not reactive after a tragedy.”

In order to keep the radio clear during incidents, members of the strike team would use I Am Responding, a web-based system that departments can use to monitor what personnel and equipment are responding to an emergency call. With the help of Lincoln County EMA and U.S. Department of Homeland Security grant funds, many of the towns in the county are already using the program, Pendleton said.

In order to ensure the fire departments and agencies in the county can continue to use I Am Responding if grant funding ceases, Pendleton said the chiefs association hopes to approach the Lincoln County Board of Commissioners about including the cost of the system in the county budget. By doing so, towns could continue to use the program at a greatly reduced cost, Pendleton said.

“If the county were to build it into its budget, it would be a lot less money for the towns to pay for (I Am Responding) through county taxes than if each town were to go it alone,” Pendleton said. “It’s a huge resource for all of us.”

Not only would I Am Responding help those on scene know who is arriving, the program would also help department chiefs know which of their firefighters are not immediately available to respond to a call in their own towns, Pendleton said.

“We want to make sure we’re not leaving any town without coverage so no one’s caught unaware,” Pendleton said.

Pendleton said the hope is to have the new team available for response in August.

“We expect some hurdles, but it’s going to be such a benefit for everyone,” Pendleton said.