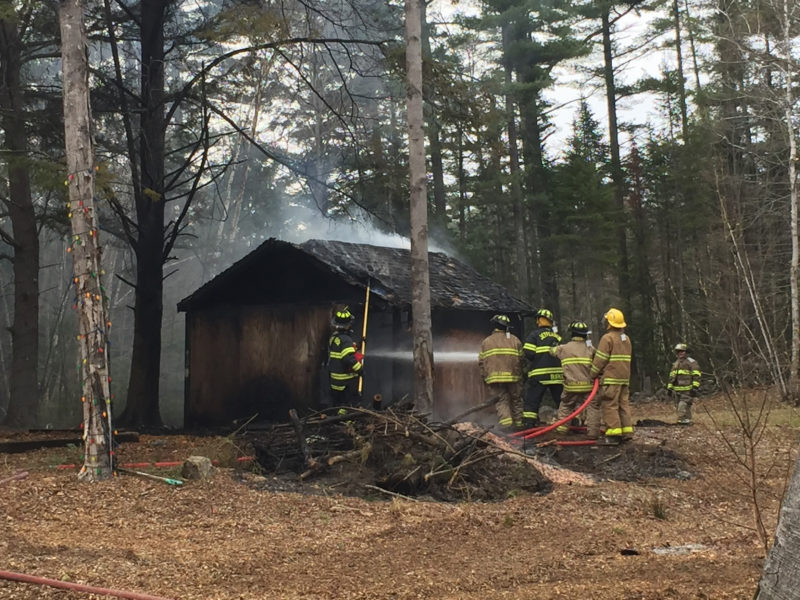 Firefighters extinguish a shed fire on Narrows Road in Nobleboro the afternoon of Thursday, May 1. (Maia Zewert photo)

Firefighters made quick work of a fire that claimed a shed on Narrows Road in Nobleboro the afternoon of Wednesday, May 1.

The Lincoln County Communications Center paged the Nobleboro Fire Department for a report of a structure fire on Narrows Road. When crews arrived on scene, the shed was fully involved and a nearby burn pile was also on fire, according to Nobleboro Captain Richard Genthner.

Crews immediately began attack operations on the fire. As of 4 p.m., firefighters were making sure the shed, the burn pile, and trees behind the shed were completely extinguished, Genthner said.

The property owner had a burn permit issued for Thursday, April 25, and it’s possible the pile rekindled and cause the blaze, Genthner said.

“It’s possible it rekindled but we don’t know for sure at this time,” Genthner said.

The Jefferson Fire Department was also paged to the scene. “Mutual aid is a system we rely on every day,” Genthner said.