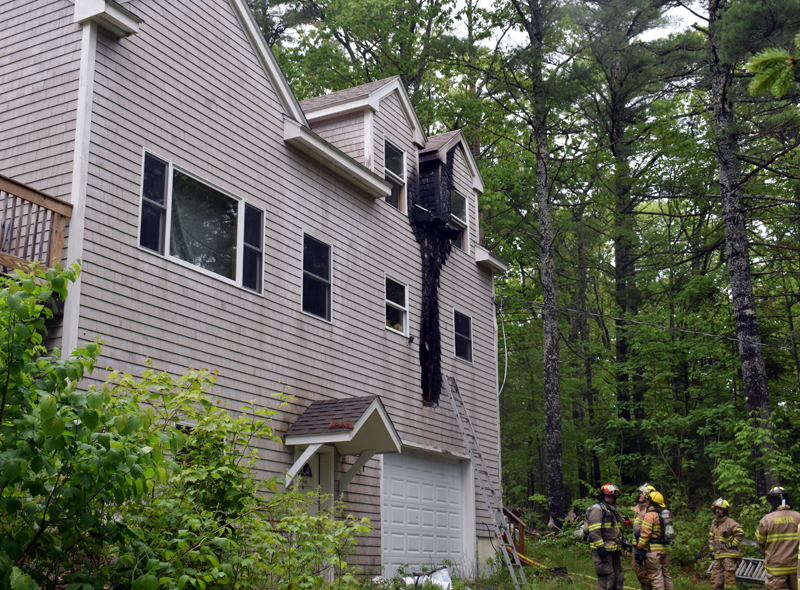 Firefighters assess the damage to a home at 99 Atwood Lane in Bristol after extinguishing a fire caused by a lightning strike the afternoon of Saturday, June 6. (Evan Houk photo)

Local firefighters quickly put out a house fire caused by a lightning strike at 99 Atwood Lane in Bristol the afternoon of Saturday, June 6.

Bristol Fire Chief Paul Leeman Jr. thinks the fire started in an electrical outlet behind the stove after the lightning strike.

“The first team did a great job of knocking it down,” Leeman said.

No one was in the house at the time and there were no injuries.

Leeman said firefighters used a transitional attack, which involves soaking the exterior of a building until the fire is contained enough to send a crew inside.

After about 15 minutes and with an adequate water supply at the ready, firefighters entered the building to mount an interior attack, extinguishing the flames shortly after.

Firefighters then used a positive-pressure ventilation unit to remove heat from the building while looking for hot spots in the rest of the house. 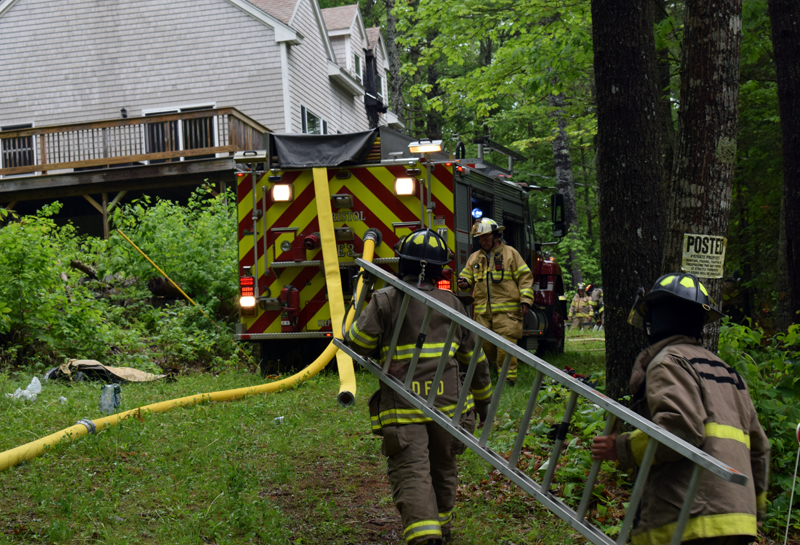 Firefighters carry a ladder to a house at 99 Atwood Lane in Bristol to assess the damage from a fire the afternoon of Saturday, June 6. A lightning strike caused the fire, which was quickly contained. (Evan Houk photo)

The approach involved hooking up a 4-inch-diameter hose to five different apparatuses to allow for a continuous water supply.

Leeman said the amount of water was more than adequate to knock down the fire. About 700 gallons were used.

Heavy black smoke and flames poured out of a hole in the first floor where the fire started, damaging the ceiling in the attic and the exterior of the second floor.

The house is a spec home owned by Rob and Jill Rice.

Jill Rice was in their home next door for the lightning strike. Rob Rice returned home shortly after, quickly noticing that the power was out.

Jill Rice, who works at The Lincoln County News, said the damage appeared to be relatively minor and contained mostly to the kitchen on the first floor and spots in the second-floor attic. The stove, microwave, and some kitchen cabinets were destroyed by the flames.

Jill Rice said she and her husband have been working on the house, getting it ready to sell.

She said she heard the very loud crack of thunder with the lightning strike at 1:52 p.m., followed by a heavy downpour and Rob began smelling smoke about two hours later. After checking on the spec house next door, she called the fire department while her husband shut off the propane tank at the house.

“The fire department did a phenomenal job; I don’t know how we’re going to repay them. … We were really impressed. It could have been so much worse. They did a great save,” Jill Rice said Monday, June 8.