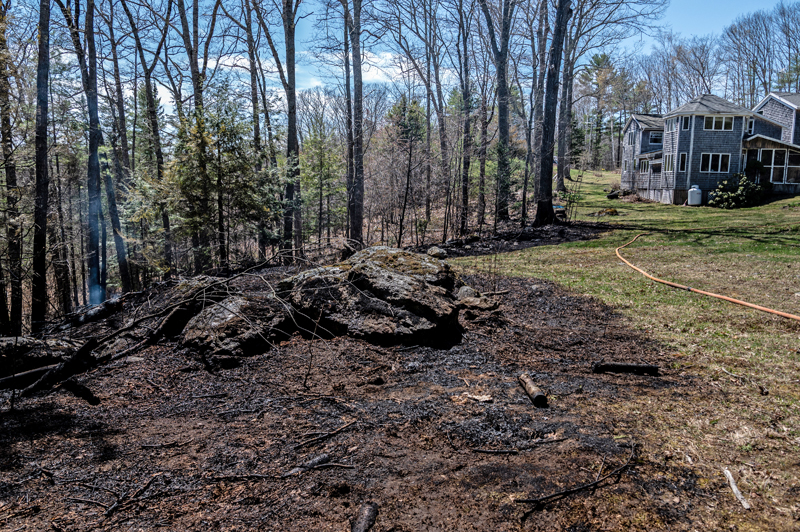 Charred land where a woods fire encroached on a yard in Somerville on Tuesday, April 27. The fire came within 100 feet of the house. (Bisi Cameron Yee photo)

Firefighters from eight departments protected a Somerville home from a brush fire that ignited several acres of surrounding forest on Tuesday, April 27.

District Ranger Art Lavoie, of the Maine Fire Service, said the fire was caused by a non-permitted debris burn. He said the fire was a ground fire with flame lengths of 1-2 feet and covered approximately 2-3 acres.

Somerville Chief Mike Dostie said that the forest service is automatically contacted for forest fires during “red flag” days when weather conditions are conducive to significant fire events and burn permits are suspended.

Jefferson Fire and Rescue Assistant Chief Alan Johnston saw heavy smoke in the area of Jones Road near the Jefferson and Somerville town line and called in the alarm, according to Jefferson Fire Chief Wally Morris. Neither town had issued burn permits for the day due to high winds, high temperatures, and low humidity.

Lincoln County Communications Center initially dispatched the Jefferson and Somerville fire departments at 12:16 p.m. Once on scene at 300 Jones Road, firefighters moved to protect a home and pickup truck near the blaze.

Firefighters were deployed on all sides of the Somerville fire, and forestry trucks from Jefferson, Washington, and Somerville took up strategic positions to contain the spread.

A Maine Forest Service helicopter made multiple water drops over the burning trees.

Members of the Lincoln County Strike Force, a team of firefighters from departments across the county that provides additional manpower at major incidents, was also called upon to provide relief during the four-hour event. “It was refreshing to see that strike force come in,” Dostie said. “It was like a second wind.”

Jefferson Fire and Rescue and Waldoboro Emergency Medical Service were on hand to rehydrate firefighters and monitor them for heat exhaustion.

Dostie said the Somerville fire was cleared at 4:12 p.m.

While firefighters fought the Somerville blaze, a second call went out for a brush fire at 594 North Mountain Road in Jefferson. Both the Jefferson and Bremen fire departments responded to the scene to quickly extinguish the approximately quarter-acre fire. Morris said the Jefferson fire was cleared by 2:30 p.m. and was determined to have no relation to the larger fire.

Waldoboro Fire provided traffic control at the fill site in Jefferson. Dostie said Jones Road is a low-traffic area and the road remained open, but was reduced to a single lane by the lines of emergency vehicles along the road.

According to Lavoie, there have been 253 wild land fires in the state of Maine this year, burning approximately 170 acres of land.

Lavoie said that 80-90% of fires in the state this year have been the result of debris burns or campfires.