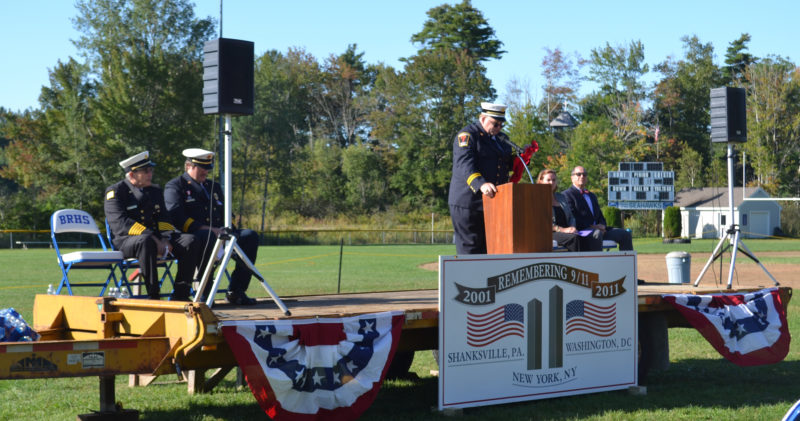 One of the most tragic events in the history of America resulted in the greatest rescue operation the nation has ever seen, said Jefferson Fire Chief Walter Morris, a keynote speaker at a 9/11 memorial service at Boothbay Region High School on Friday, Sept. 8.

Gov. Paul LePage, firefighters from across the state, students, and community members gathered on the BRHS athletic field to remember the Sept. 11, 2001 terrorist attacks at a ceremony held in conjunction with the 54th Maine State Federation of Firefighters Convention.

A float memorializing the victims of the 9/11 attacks appeared the next day in the convention’s parade. The late Frankfort Village Fire Chief Earl Anderson created the float, according to his son, Jeff Anderson. 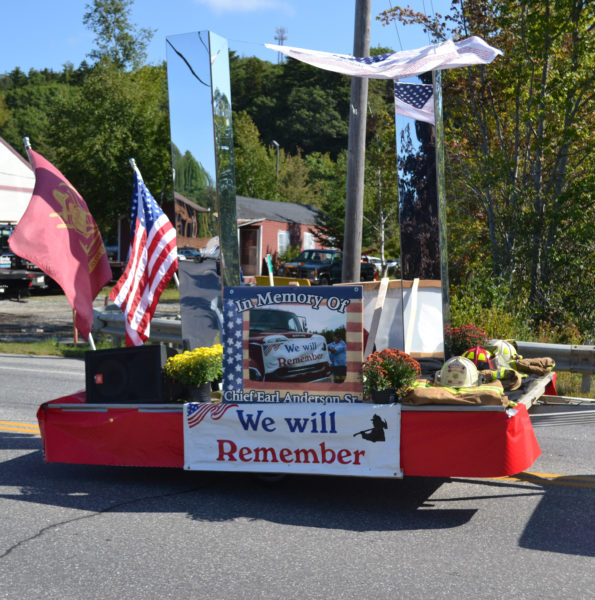 The float has been part of the convention parade since 2008. Earl Anderson did not personally know any of the victims of the attacks, Jeff Anderson said. “But he was connected to everybody,” Frankfort firefighter Charlie Scherer said.

Sept. 11 was a day of very personal loss for Morris, who previously managed the Rockland County Fire Training Center in Rockland, N.Y. Morris was in a training exercise with volunteer firefighter and New York Police Department Emergency Service Unit Sgt. John Coughlin the day before Coughlin died in the attack on the World Trade Center.

New York City Firefighter Andrew Fredericks and Morris attended school together, worked together, “went to each other’s children’s birthday parties,” and “did the things that best friends do,” Morris said. Fredericks had completed an overnight shift and was off duty when a report came in that a plane had struck the World Trade Center.

Fredericks knew he would be needed, grabbed his gear, and was among the first emergency responders at the scene. Fredericks’ last known location was the 43rd floor of the north tower. “My best friend lost his life on Tuesday, Sept. 11, 2001,” Morris said.

Morris helped train Welles Remy Crowther, a volunteer firefighter in his department who aspired to work with the New York City Fire Department, Morris said. Crowther was working as an equities trader on the 104th floor of the south tower when it was hit.

His body was not recovered until seven months later, alongside other New York City firefighters near the command center, Morris said.

Eyewitnesses reported seeing a man with a red bandana carry at least 18 people to safety, Morris said. Crowther always carried a red bandana his father gave him in his back pocket. It is believed that Crowther was the man the eyewitnesses described, and he was on his way to free more victims trapped by debris when the building collapsed. 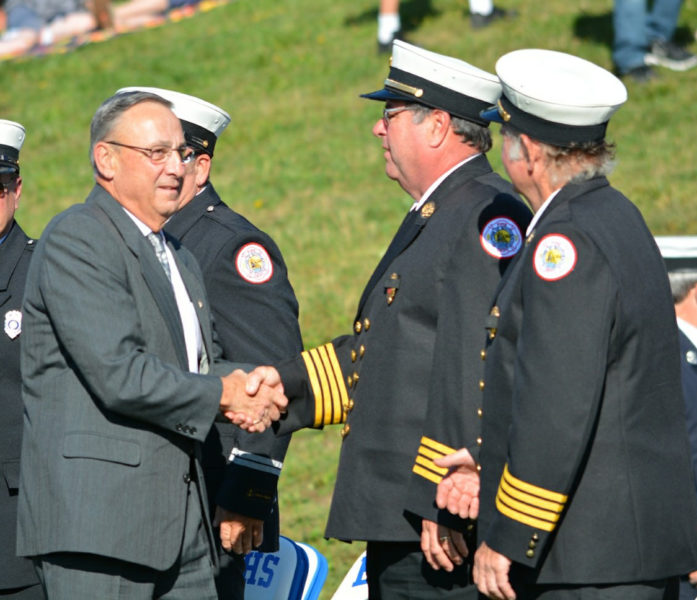 The attack on the World Trade Center left 2,606 dead, including 343 firefighters and 60 police officers. The coordinated terrorist attack also left 246 airplane passengers dead and claimed 125 lives at the Pentagon.

However, there were an estimated 17,400 civilians at the World Trade Center at the time of the attack, and most were saved “through the efforts of heroic rescuers,” Morris said. “While Sept. 11, 2001 will always be considered one of the darkest days of our nation’s history, we in the fire service must remember that it is also the date of the greatest and most heroic rescue operation ever conducted.”

Training and preparedness are what allowed Coughlin, Fredericks, and Crowther to “face an impossible situation and not run away,” Morris said. Training for emergencies both large and small is the best way to honor their legacy, he said.

In addition to the victims of Sept. 11, Maine firefighters who passed away in the last year were also honored at the ceremony Friday. Waterville Fire Department Lt. Scott Holst read their names as a fire bell was rung to commemorate the alarm that called them to service. 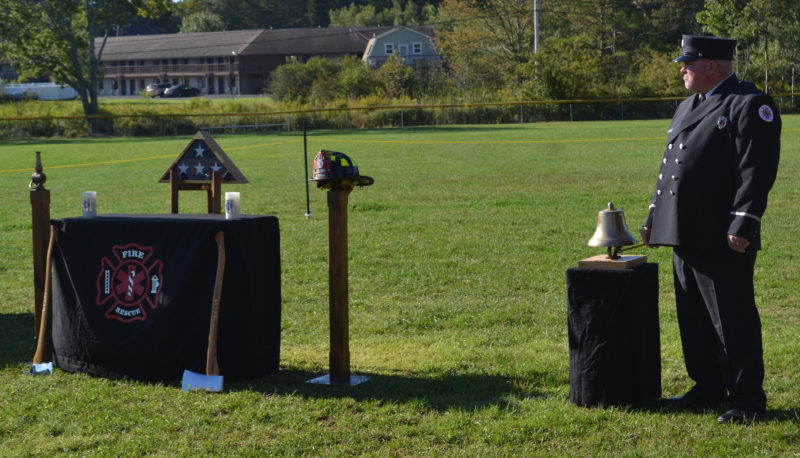 Boothbay firefighter Joe Hall rings a fire bell to commemorate Maine firefighters who passed away in the last year during the 9/11 memorial service in Boothbay Harbor on Friday, Sept. 8. (Abigail Adams photo)

Boothbay Fire Chief Dick Spofford, Ronald Spofford’s son, encouraged the students and community members present to remember in “their thoughts and hearts” all those lost on Sept. 11, 2001 and the firefighters currently in the service.

Morris lost many close friends and colleagues in the Sept. 11, 2001 terrorist attacks, he said. “In the aftermath, what was special was how unified we became as a country,” Morris said.

For Morris, the unity, camaraderie, and bravery of emergency responders and volunteers who saved others before saving themselves is what Sept. 11 signifies. Sixteen years later, amid domestic turmoil and disunity, “we as a nation have forgotten that,” he said.

“As a firefighter and first responder, I want to think, as tragic as it was, it was not in vain,” Morris said. “We as a nation pledged to never forget,” he said.