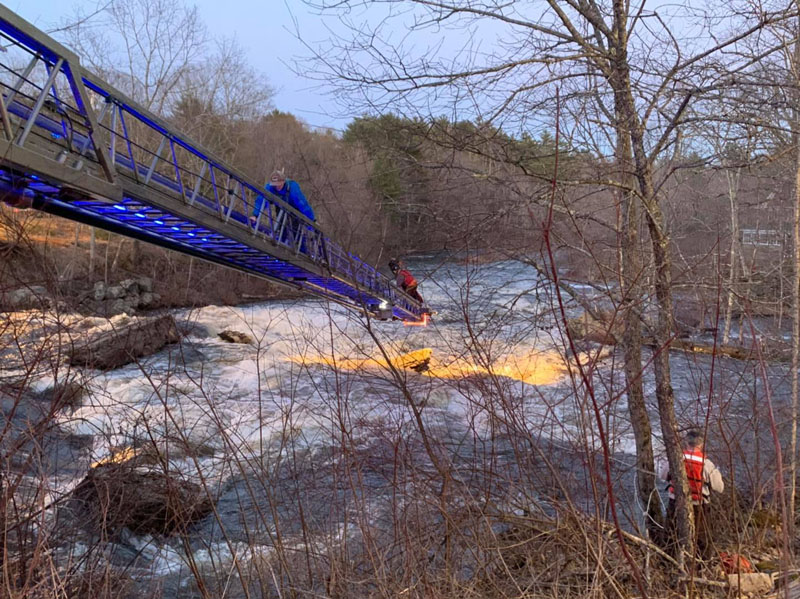 A canoeist climbs a ladder to safety from a rock in the Sheepscot River in Whitefield, Saturday, April 4. Firefighters used a ladder truck to reach two stranded canoeists after their craft broke up in the rapids, according to Whitefield Fire Chief Scott Higgins. (Photo courtesy Whitefield Fire Department)

Firefighters used a ladder truck to rescue two canoeists from a swift-moving section of the Sheepscot River in Whitefield after their canoe broke up against a rock Saturday, April 4.

The canoeists were navigating rapids in the area when their craft became trapped against the rock, according to Whitefield Fire Chief Scott Higgins. They climbed onto the rock before the canoe was destroyed, caught between the current and the rock.

“They did the right thing,” Higgins said. The pair was in the middle of the river, about 30-40 feet from shore. Someone on shore saw them and called for help.

When firefighters arrived, they threw a rope to the canoeists as a safety line. “That’s all we could do,” Higgins said.

They called Jefferson Fire and Rescue to respond with dry suits, then they asked the Gardiner Fire Department to bring its ladder truck.

“That was the only option we could think of,” Higgins said.

He has never seen a ladder truck used for a water rescue, but “the angle was perfect to back a ladder truck down there and extend the ladder out to them,” he said.

A Gardiner firefighter climbed out to the rock. The canoeists “just climbed up onto the ladder and came ashore,” Higgins said.

“They were fine,” Higgins said, and did not require medical attention. If they were wet at all, it was only their feet.

The paddlers had life jackets and were otherwise well equipped, according to Higgins.

He was not sure how long they were on the rock, because he did not know how long they had been there before someone saw them. From the time firefighters arrived, it took 45 minutes to an hour to get them to shore.

Paddlers who venture onto the river this time of year should know the river and its hazards, Higgins said.

The identity of the canoeists was not immediately available.