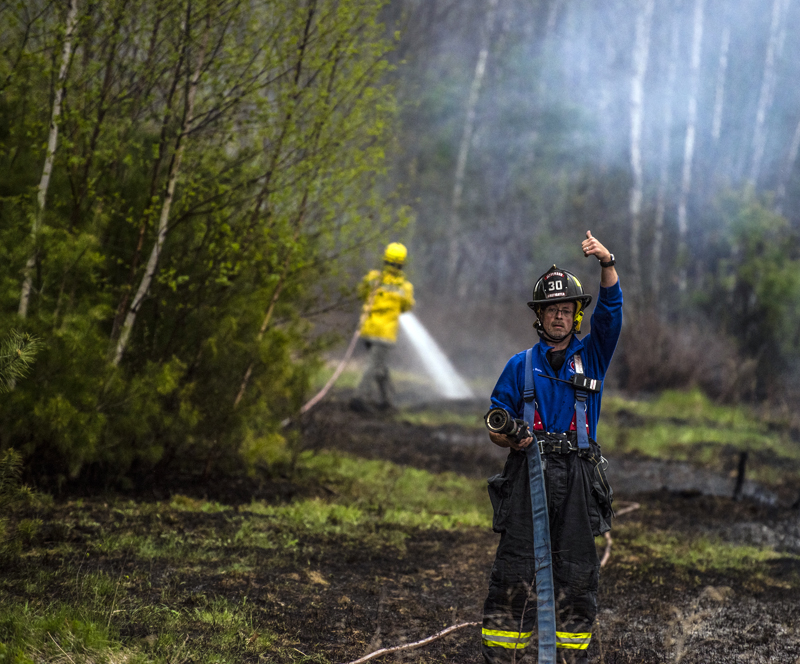 A firefighter gives a thumbs-up to start pumping water during a brush fire in Jefferson on Monday, May 3. (Bisi Cameron Yee photo)

The pilot of a plane flying over the area reported a fire surrounding several structures in the area of Bunker Hill Road and Gates Road in Jefferson on Monday, May 3.

The Lincoln County Communications Center dispatched the Jefferson Fire Department to investigate the report at 2:20 p.m. Firefighters located a 3- to 4-acre woods fire threatening several structures at 763 Bunker Hill Road as well as a self-storage facility at 784 Bunker Hill Road.

The fire departments from Damariscotta, Newcastle, Somerville, and Whitefield all responded, along with 10 members of the Lincoln County Firefighter Strike Team. The strike team provides manpower to assist at major incidents throughout the county.

The fire was burning at multiple points, spread by the wind, and fire trucks approached the scene from three access points along Bunker Hill Road.

Jefferson Fire Chief Wally Morris coordinated the response at the head of the fire, near Doe Run Self Storage, where the fire approached “within a couple of hundred yards,” according to Maine Forest Ranger Dan Welch.

Assistant Chief Alan Johnston managed the scene from the south end, where the fire originated and came within 100 feet of a cabin and several outbuildings.

A firefighter moves through a woods fire in Jefferson on Monday, May 3. (Bisi Cameron Yee photo)

The property owners were not present at the time of the fire. No injuries or property damage were reported.

Morris said firefighters were able to keep traffic flowing on Bunker Hill Road throughout the incident.

Welch said the fire resulted from an unpermitted debris burn several days prior that had not been completely extinguished.

Welch said a dry spring has been one factor in the recent rash of brush fires, but unpermitted burns and improper extinguishing of burns are also to blame. He said debris burns are one of the biggest factors causing brush and woods fires every year.

According to Welch, people are letting their debris fires burn down instead of actively extinguishing them. He recommends drowning a fire and mixing the ashes to ensure all the coals are out.

Welch said homeowners should be wary of the weather and have a hose and hand tools available during a burn in order to react quickly if it spreads unexpectedly.

Welch said burns are generally not permitted until after 5 p.m., when the relative humidity increases and the wind starts to die down.

Burn permits cost $7 and are available through local fire departments or through the Maine Burn Permit System at tinyurl.com/w5fbmdsj.