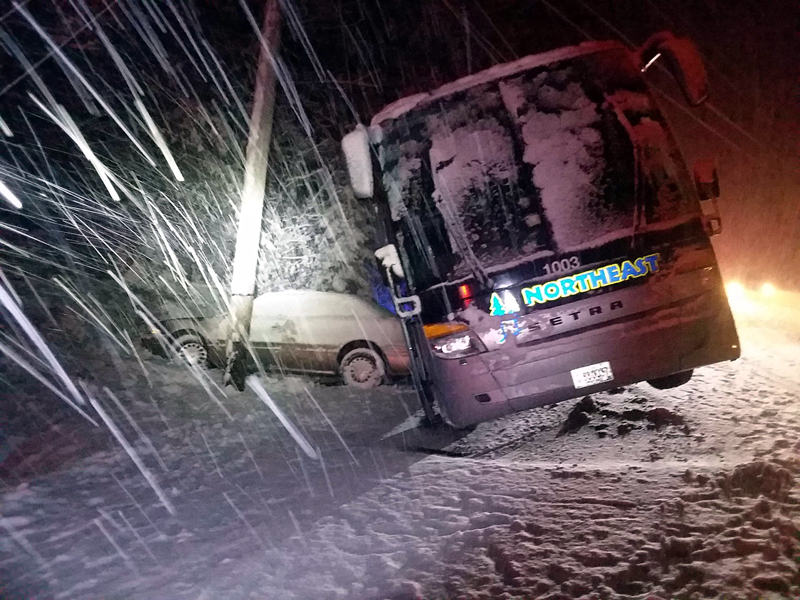 Snow and ice on the roads contributed to several accidents across Lincoln County over the weekend, including an incident involving a charter bus and a Buick LeSabre on Route 27 in Edgecomb on Saturday, Dec. 9. (Photo courtesy Lincoln County Sheriff’s Office)

Saturday, Dec. 9 marked Lincoln County’s first measurable snowfall of the 2017-2018 season, followed by a mix of snow and freezing rain Tuesday, Dec. 12. The two incidents brought sloppy road conditions to the county and the first resulted in several traffic accidents, as well as scattered power outages.

The downgrade meant the weather service did not expect snowfall totals to exceed 6 inches during the event, which was forecast to begin with snowfall or mixed precipitation Saturday afternoon and continue through the overnight hours into Sunday morning.

Snowfall totals ranged from 3-5 inches, with more in some locations. Arlene Cole, of Newcastle, a cooperative weather observer with the National Weather Service who contributes weather data to The Lincoln County News, reported about 7 1/2 inches in total snow accumulation Saturday.

The system, which tracked erratically up the East Coast and into the Gulf of Maine, was a tricky one for forecasters. Initially, some forecasters indicated significant snowfall, then changed their estimates to a trace or less for the Lincoln County area. It wasn’t until Friday morning that forecasters began to trend toward more snowfall accumulation, until that trend reversed Saturday morning.

Winds never exceeded single-digit velocities, and were not a major factor during the event. However, the heavy, wet snowfall knocked down tree branches and wires, bringing power outages to Lincoln County.

By Sunday morning, there were 310 Lincoln County households without electrical power, according to the 11:57 a.m. report from CMP. Lincoln County had the most outages of any county in the state, followed by Kennebec County, with 208 at the time.

All of the outages Sunday were affecting coastal communities in Lincoln County, with 142 in Bristol, 124 in Boothbay, 33 in Southport, and 11 in Westport Island, according to CMP.

CMP crews succeeded in restoring power before nightfall Sunday to all of the households with outages, according to a report from CMP Sunday afternoon.

In addition to power outages, the snowfall contributed to several motor-vehicle accidents across the county Saturday afternoon and evening, including one involving a charter bus.

Ethan Murray, 20, of Newcastle, was driving a 2004 Buick LeSabre north on Route 27 in Edgecomb when his vehicle “spun out” due to slippery road conditions, according to Lincoln County Sheriff’s Office Lt. Brendan Kane.

Murray’s vehicle had come to a stop on the east side of Route 27 when a northbound Northeast Charter and Tour Inc. bus operated by Clyde Markland, 74, of Sanford, began to slide, also due to the snow, Kane said. The bus struck Murray’s vehicle and pushed it into the ditch before partially entering the ditch itself.

Neither Murray, Markland, nor the 28 passengers on the bus reported injuries, Kane said. The Buick sustained minor damage to its trunk and bumper, while the bus had cosmetic damage to the passenger side.

The Lincoln County Communications Center received a report of the accident at 6:05 p.m. Crews remained on scene until 8:20 p.m., Kane said.

The incident was one of 11 accidents the sheriff’s office responded to over the weekend due to road conditions, including rollovers in Boothbay and Southport, Kane said. The number does not include accidents with non-reportable damage or those covered by municipal police departments.

“The one common factor with all the accidents is speed,” Kane said. “The first snow of the year, everyone forgets that they need to slow down.”

The winter weather advisory remained in effect until 6 p.m. Tuesday. Temperatures were forecast to continue rising through the nighttime hours, with precipitation changing over to rainfall.

Snowfall accumulations in the northern part of Lincoln County were forecast to range from 3-6 inches, while coastal residents should have seen 1-3 inches, according to the weather service. Final snowfall accumulations may be lowered after mixed precipitation changed over to rainfall, melting some of the fresh snowfall.

High winds were not a factor during the event, and CMP had not reported any power outages in Lincoln County as of 3:27 p.m. Tuesday.