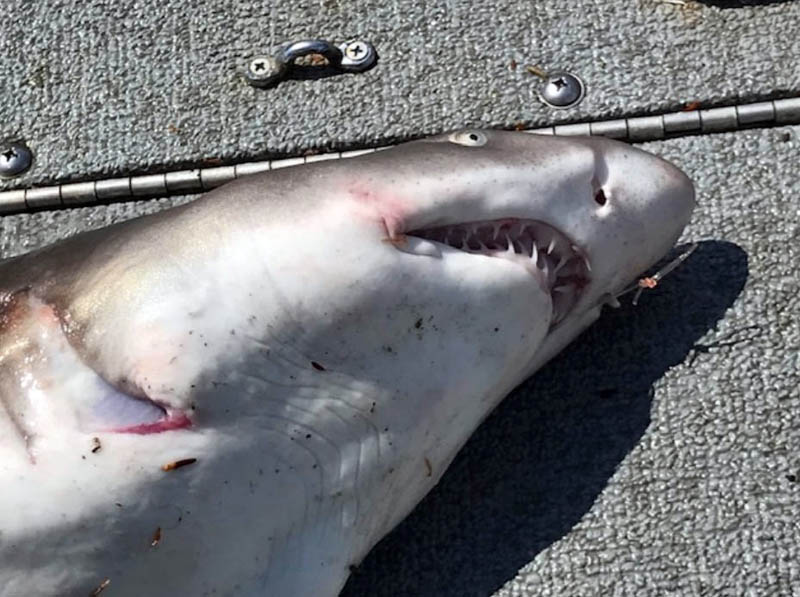 Lincoln County’s shark summer continued Thursday, Aug. 25 when a fisherman on a charter boat pulled an unusual specimen out of the Sheepscot River in Wiscasset. 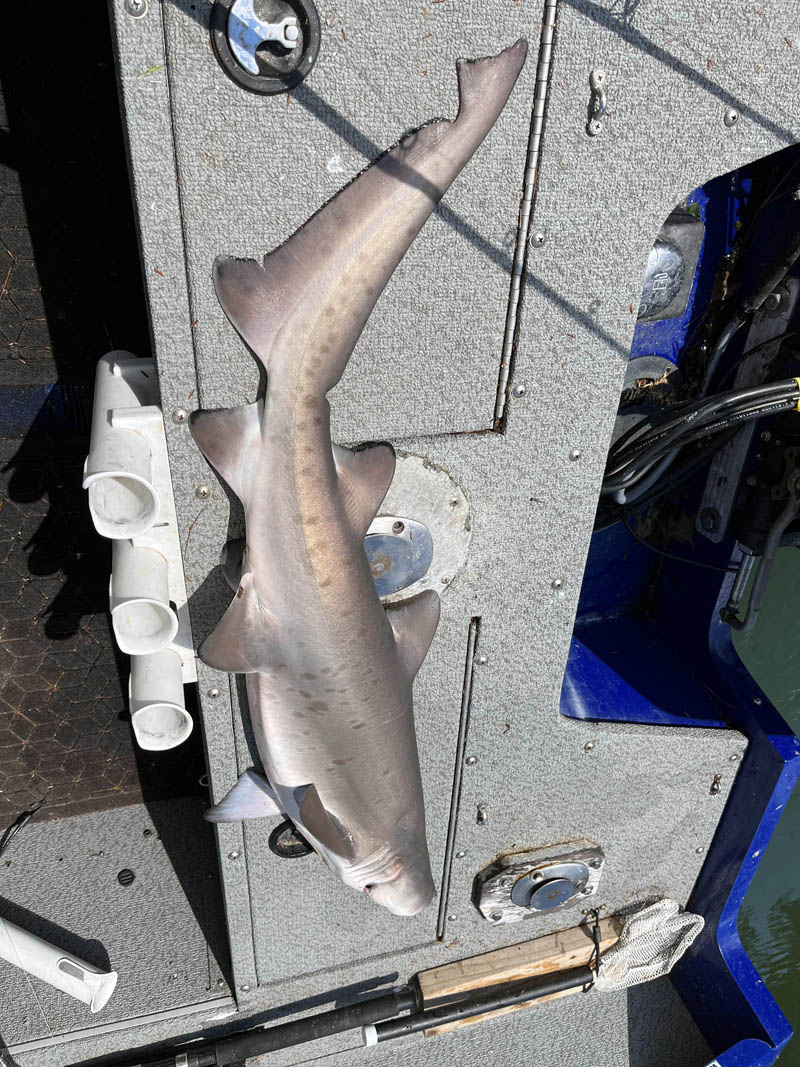 Caught after a lengthy fight, this sand tiger shark measured roughly 44 inches long and weighed an estimated 40-50 pounds after a charter fisherman caught it near the mouth of the Marsh River in Wiscasset on Thursday, Aug. 25. (Photo courtesy Dean Krah)

Newcastle charter boat Captain Dean Krah said he has fished Maine waters for decades and even he wasn’t sure what his client had caught.

“I’ve caught every shark out there in the ocean, including a great white, but none of us had ever seen a shark like this before,” Krah said. “He had a tail, almost like a thresher shark, and a big set of teeth, and there were gills along the side, like a great white. The color was beautiful. He had brown spots.”

Krah said the fish was caught while his client, Dave Fischer, and a guest, Al Andrews, of Westport Island, were fishing for striped bass near the mouth of the Marsh River, about a mile north of the Donald E. Davey Bridge, which connects Edgecomb and Wiscasset.

“My client hooked up and he and this fish just fought and fought,” Krah said. “(The shark) went down deep and hard. He finally got it up where we could see it and we thought we had a live sturgeon.”

When the men finally brought the shark aboard, he was just shy of 4 feet and weighed an estimated 40-50 pounds, Krah said.

Krah initially thought Fisher had caught a thresher shark, or maybe a great white, he said. The men took pictures of the fish and let it go, the hook still buried deep in the animal’s gullet. Krah said the shark’s teeth forestalled any desire to try to retrieve the hook.

In an email exchange with Krah, Matt Davis, a scientist with the Maine Department of Marine Resources identified the fish as a sand tiger shark, Carcharias taurus. Davis said identifying traits including “ragged teeth, a ‘hunched’ back, a very tall second dorsal fin, and a very long upper tail lobe.”

“Sand tigers are not uncommon in Maine, but we usually hear about them more in the south around the Nubble/Cape Neddick area,” Davis said. “I imagine as our waters warm over the coming decades, we could be seeing more of them extend throughout the state.”

According to various online resources, sand tiger sharks are not known to be aggressive toward humans. They are generally described as docile and slow moving and are a popular shark for public aquariums due to the species ability to survive in captivity.

Sharks have been in the news this summer with several sightings reported in Maine waters including a great white shark that was recorded killing a seal off Pemaquid Point in July.