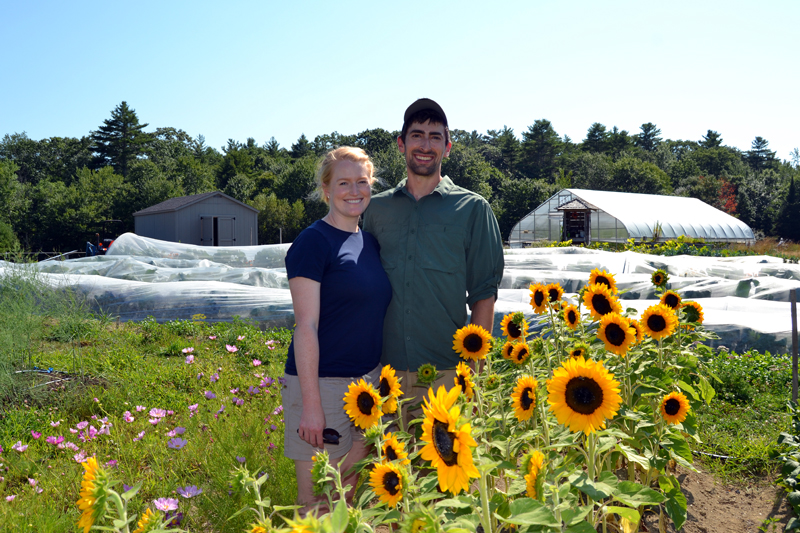 Kelsey Gibbs and Matt Silverman stand among sunflowers at Wanderwood, their sustainable stays and events business and organic farm at 79 Sidelinger Road in Nobleboro. The couple purchased the property in May 2017. (Maia Zewert photo)

Kelsey Gibbs and Matt Silverman first bonded over their love of the outdoors over a decade ago. The couple, now married, has funneled that passion into Wanderwood, a sustainable stays and events business with an integrated organic farm located on Pemaquid Pond in Nobleboro.

In the five years Gibbs and Silverman have owned the 96.5-acre property at 79 Sidelinger Road, they have renovated a 1920s farmhouse and 1870s barn to host guests and events while also expanding their farm footprint into a diversified organic farm.

“We now know the things we thought were going to take five years are going to take 10 years, but when you’re in it for life, it’s OK to take time to be thoughtful,” Gibbs said.

Gibbs and Silverman met at Colby College, where they bonded over their interest in the outdoors. After their respective graduations – Gibbs in 2010 and Silverman in 2012 – they moved to Portland, where Silverman began working for a land trust and cabinet maker and Gibbs started working at the L.L. Bean corporate office.

Knowing that they wanted to live in Maine for the rest of their lives, Gibbs and Silverman decided to leave the state to gain hospitality experience overseas. They took the opportunity to venture to Scotland to work at a bed-and-breakfast in 2015.

“We thought that if we didn’t leave Portland at that point, we would never find a way to leave and come back,” Gibbs said. 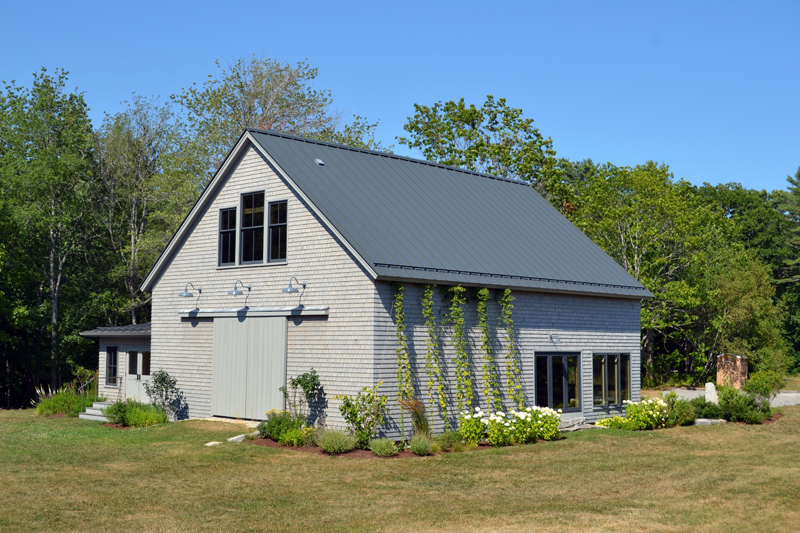 The Wanderwood barn at 79 Sidelinger Road. Kelsey Gibbs and Matt Silverman, along with friends, family, and local contractors, renovated the 1870s barn to host both private events and public programs. (Maia Zewert photo)

With the idea for what would become Wanderwood in their heads, Gibbs and Silverman undertook a work-stay program in Scotland, where they worked at a bed-and-breakfast. They loved the style of service the establishment provided, from the warmth of interactions with tenants to the guests’ free exploration of the grounds.

“Seeing that, our thought was how can we make our dream real while also tying in our interests with environmental sustainability and connecting people with where their food comes from, all in a very intentional way,” Silverman said.

Upon returning to Maine in 2016, the couple lived in Thomaston while searching for a property on which they could make their dream a reality from a business perspective. The search took them down “every dirt road,” Gibbs said, until they eventually found 79 Sidelinger Road. The property had been in the Shell, later Sidelinger, family for generations, and contained an 1870s barn, a 1920s farmhouse, acres of woodlands, and ample space for a farm. Through the sale, Gibbs and Silverman met some of the members of the family.

“They were very thoughtful, and you could tell they really cared about the natural elements of this place,” Gibbs said. 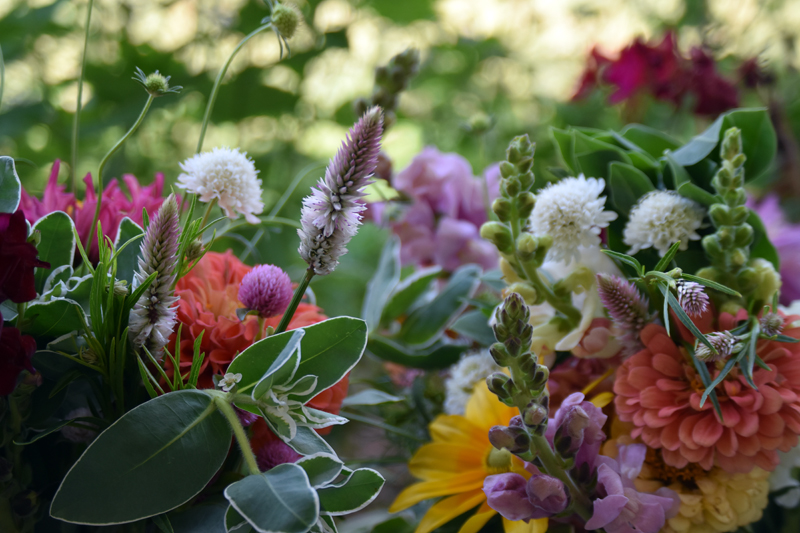 In addition to its organic produce, Wanderwood, a sustainable stays and events business on Sidelinger Road in Nobleboro, also grows a wide variety of flowers. (Isabelle Porter photo)

“We’re paying homage … by keeping the character and being able to use a lot of the pieces in the barn and the farmhouse,” Silverman said.

Once they closed on the property in May 2017, Gibbs and Silverman immediately began working on the soil to start the three-year process of transitioning into an organic farm certifiable by the Maine Organic Farmers and Gardeners Association. The Spears family helped the couple transition some of the fields they had farmed for years into cover crop for the first fall.

The first year was spent mostly on renovations, expanding the farm footprint, and the “nitty-gritty” details, Silverman said, including coming up with a name for the business. They wanted a name that would connect to the woods and the sense of space and being present, which led them to Wanderwood, Gibbs said.

Gibbs and Silverman brought their plans for the property to the Nobleboro Planning Board in February 2018 and received approval for the project three months later. The couple married a few months later on Aug. 18, the same week Silverman and friends and family completed the subsurface of the barn floor. 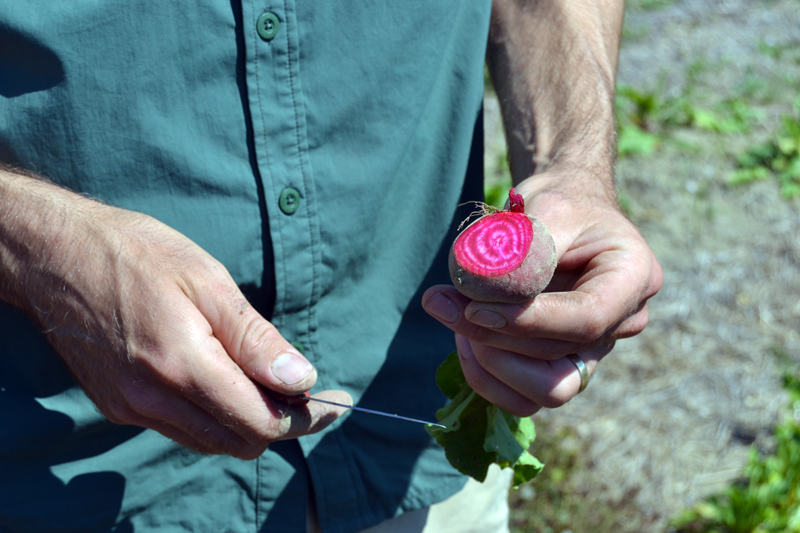 Wanderwood co-owner Matt Silverman shows the color of a chioggia beet during a farm tour on Thursday, Aug. 4. The farm at the sustainable stays and events business has been certified organic since 2020. (Maia Zewert photo)

Gibbs and Silverman spent the following year focused on additional renovations and property improvements with the expectation that 2020 would welcome the first season of events. Shortly after hosting their first farm dinner, however, the slate was canceled or postponed due to the COVID-19 pandemic. Gibbs and Silverman used the time to work on projects they might otherwise have completed at a later date, as well as setting up online ordering for their produce.

“We sold a lot of produce, through our website, which worked very well, but we were excited to have people back to being able to visit the farm,” Silverman said.

“It’s much easier to shop for vegetables in person than on the internet,” Gibbs said.

The same year, Gibbs and Silverman reached their goal of becoming MOFGA-certified organic. They are now in the association’s Journeyperson Program, which provides technical assistance, business planning, and mentorship to new farmers. The couple’s mentors, Dharma Farm owners Jeffrey Knox and Abby Lydon, have been incredibly supportive and great at sharing their knowledge, Silverman said.

After a year of delay, 2021 marked the first season of events, bringing everything from weddings and anniversaries to birthdays and company parties to the barn. With Wanderwood’s Earth-friendly mission, Gibbs and Silverman are committed to keeping the events as sustainable as possible. Their goal is to ultimately use all green energy while also minimizing waste. 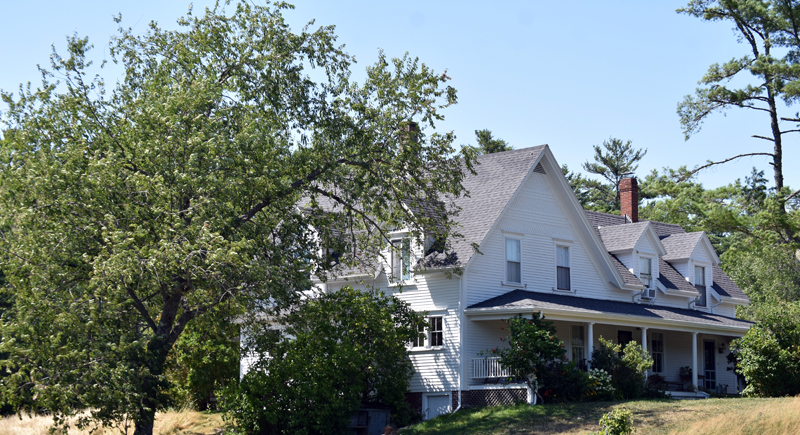 “We’ve experienced firsthand how there are things that will only be used once, like centerpieces or table cloths, and we want to try and reduce that as much as we can,” Silverman said.

While the events are work, being a part of the biggest celebrations of people’s lives is incredibly enjoyable, Gibbs said.

“I feel like every wedding ceremony, our marriage gets a little stronger,” Silverman said.

In addition to private events, Wanderwood has its own programming. Gibbs and Silverman host a weekly farm stand in their event barn on Wednesday evenings from 4:30-6:30 p.m. They have used the space for talks and workshops, and will host a farm dinner with Waldoboro-based Applecroft Catering to celebrate summer on Wednesday, Aug. 17. 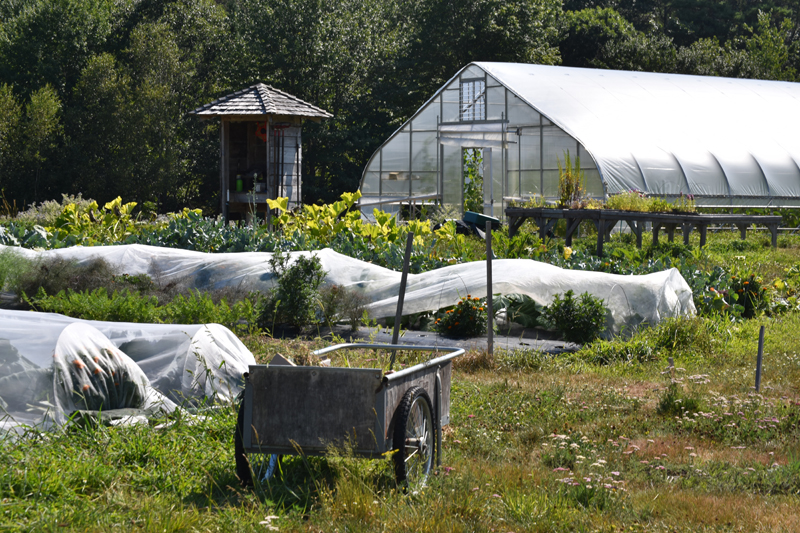 Some of the produce beds at Wanderwood. The organic farm has a little under an acre in production, co-owner Matt Silverman said. (Isabelle Porter photo)

The farm dinner is the first of many to highlight not just their own produce, but all of the growers, chefs, and caterers in the area, Silverman said.

“That’s part of the reason we wanted to move to Midcoast Maine because there’s all of this creative energy from farmers, from makers, from artists that are all here and really collectively committed to this part of Maine,” Gibbs said.

Wanderwood will host more events in the fall and winter to get more people onto the property and into the barn. Gibbs and Silverman have some long-term plans for the property, including growing their “farm-side” accommodations to include platform tents and off-the-grid cabins, the expanding of the existing trail network on the property, and to add more beds to their garden. 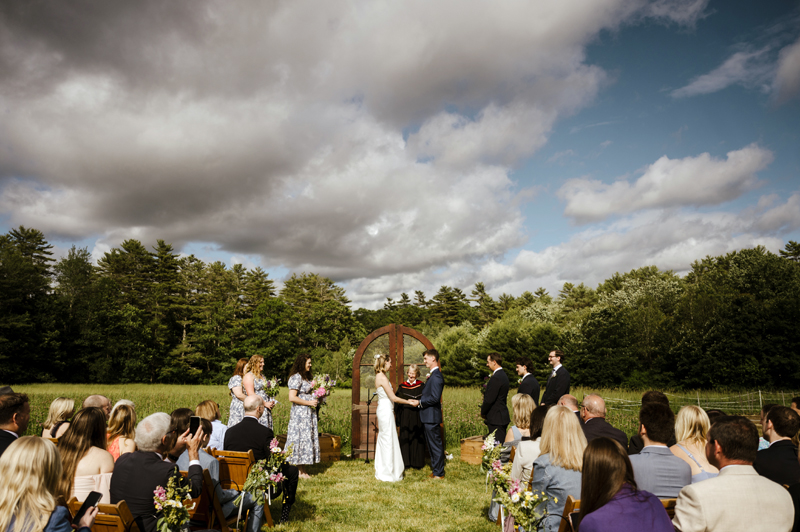 All growth at Wanderwood will be considered carefully, as Gibbs and Silverman are focused on preserving and increasing the sustainability and resiliency of the land.

“We feel lucky to be the stewards of this place, and the connections we get to make to the people and the land here is a privilege for us,” Silverman said.