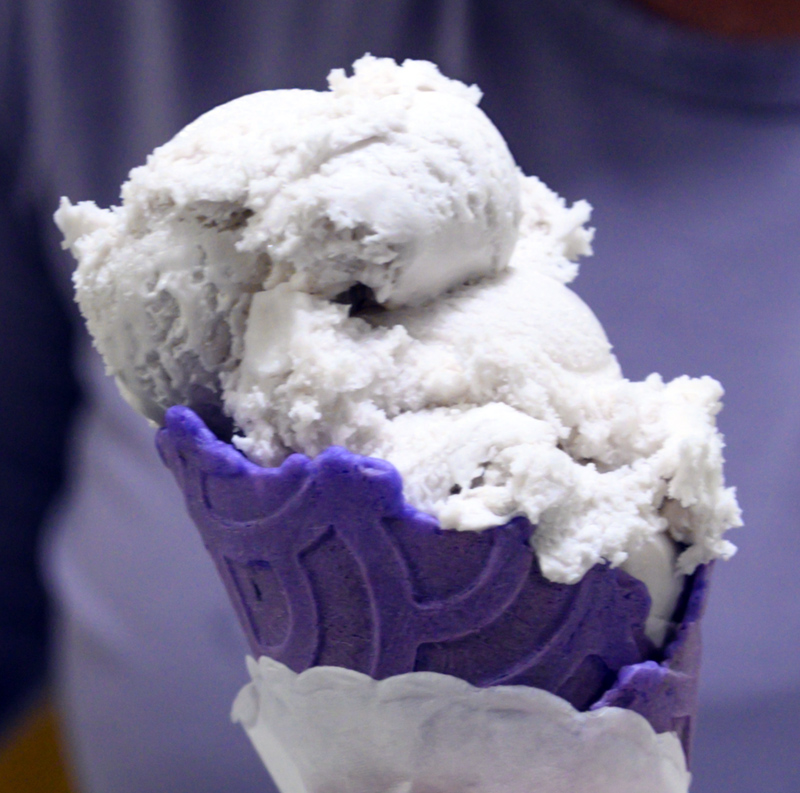 Ice cream lovers can enjoy a hyperlocal floral flavor when they visit SeaLyon Farm in Alna aboard the Wiscasset, Waterville and Farmington Railway’s Saturday trains in July. This year’s celebration of all things lavender adds Round Top Ice Cream to the blossoming partnership between farm and railway.

Now in its second year, the Lavender Pickin’ Dinnertime Train is poised to join Pick your own Pumpkin and Steam and Sleigh as a signature collaboration between the two Alna organizations. New vendors like Round Top and Wiscasset’s Maine Tasting Center will round out offerings from Grandpa’s kitchen of Pittsfield and the farm store.

After last year’s well-received lavender Saturdays, farm owners Don and Marcia Lyons wanted to build on the momentum. Marcia Lyons approached Stephanie Poland, owner of the Round Top Ice Cream, about bringing her lavender ice cream to the party.

Lavender ice cream debuted at Round Top in 2021 when Poland, looking for ways to integrate more local products into the approximately 60 flavors of ice cream that can be found at Round Top, began to play around with mixing lavender simple syrup into cream.

Poland recalled looking at the menu tiles that hung over the counter at the ice cream stand and thinking “What else do we need? More chocolate-based flavors?” When she considered the entirety of the menu, however, lavender was the flavor she felt was missing.

Poland said she had come across lavender in several culinary settings, from lavender honey to cocktail recipes to a fondly remembered scallop dish that was served with lavender syrup.

To create the new ice cream, Poland started out using a grocery store food-grade lavender product, but said it didn’t have “that extra punch” she wanted. When a friend introduced her to SeaLyon Farm lavender, she found the intensity she was looking for.

The fragrant flower, intense in the syrup, became more subtle and delicate in the final product, infusing the ice cream with a refreshingly clean and unique flavor.

Poland’s parents owned Round Top, a fixture in the community since 1904, and she grew up in the old farm helping with the family business while still in grade school. Poland has owned the business since 2010 and now making ice cream is almost intuitive.

“There’s no recipes really – it’s all just here and I just throw it together,” she said.

For the lavender ice cream she made a large batch of simple syrup, boiling the dried lavender pods with sugar and water. She then added a slow stream of the syrup to cream, sampling it until she got the taste she was looking for.

Poland said she goes through about 15 gallons of lavender ice cream a week and expects to sell 200 gallons over the summer. The ice cream quickly became a staff favorite. Natalie Kaler is a fan of the classics and likes how vanilla custard ice cream settles the lavender, how the two subtle flavors play off each other. Amanda Taylor described it as “creamy, with a little pop to it.”

Poland is a strong believer in collaboration, in learning from other producers and vendors, and brainstorming new opportunities. A Maine-made gift shop is another new addition to the flagship store in Damariscotta.

For Don and Marcia Lyons the lavender crop is a major source of income, despite its brief harvest window. It has already become a settled part of their agritourism plans, and they create a variety of value-added products using lavender from jams and jellies to candles and lip balms.

The initial farm plan, drawn up in 2017, did not even include agritourism, but when WW&F proposed the destination-based events, Don and Marcia Lyons saw the possibilities. The 15-minute train rides through the woods to the farm have become part of what defines SeaLyon Farm and has helped foster growth that will allow the couple to scale up offerings – when they can source the staff to make that happen.

Approximately 150 people attend the lavender-picking events, many by train, but walk-ins as well. The aroma of the lavender, known for its relaxing tendencies, infuses the air so that “sometimes it’s hard to get them to leave,” Don Lyons said. He described walking the farm at the end of an evening and finding a woman lying next to a patch of lavender lost in a book.

WW&F Visitor Interaction Coordinator Steve Piwowarski said that when the Don and Marcia Lyons proposed adding a lavender picking train to the existing slate of paired events, the leadership at the railway thought it would be another winner. The concept took off last year and Piwowarski expects that trains may sell out again.

The inclusion of Round Top aligns with Poland’s vision for her business. She wants Round Top to be part of the community that SeaLyon is building in Lincoln County, to support the Lyons’ efforts to shine light on local providers.

“To be part of something – part of their farm – it’s beautiful,” she said.

Lavender trains will run every Saturday in July at 4 p.m. and 6 p.m. If trains sell out, there is a possibility that a 2 p.m. time will be added.