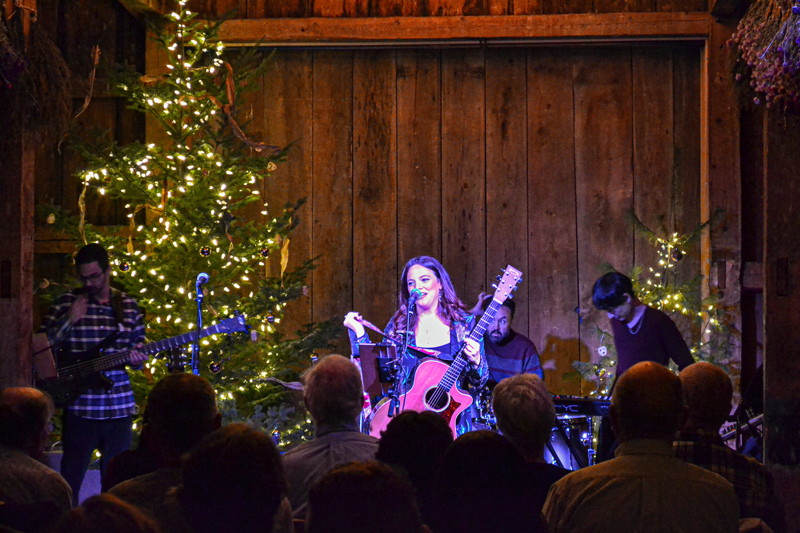 Cara Brindisi prepares to perform her first song of The Snow Globe Tour performance with her band at Wanderwood in Nobleboro on Saturday, Dec. 3. (Lydia Simmons photo)

Cara Brindisi, a former contestant on the NBC vocal competition series “The Voice,” sang her heart out in a performance for a leg of her The Snow Globe Tour at Wanderwood in Nobleboro on Saturday, Dec. 3. 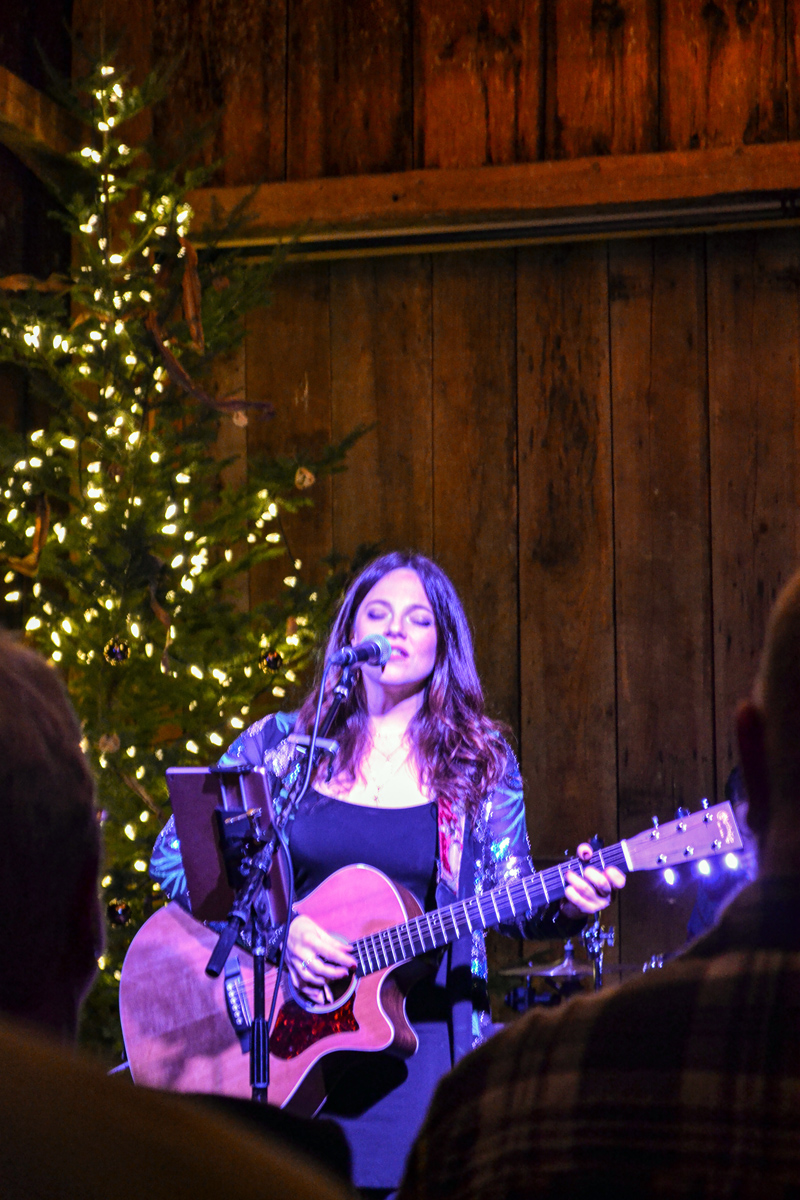 Brindisi and her band performed a beautifully eclectic set list including originals, holiday tunes, and more. Needless to say, there was something for everyone to enjoy.

The evening began with a warm welcome from the owners and staff at Wanderwood. The venue has a rustic chic feel, in a fully refurbished barn but still managed to present as authentic. Dried flower bouquets lined the beams from Wanderwood’s very own gardens, and two Christmas trees, also from the property, wrapped with lights and ornaments decorated the stage.

The event offered refreshments for the guests including some warm mulled cider complete with cinnamon sticks and orange slices, as well as wine.

The venue combined with the friendly and comfortable personality of the performers made for an inviting and intimate experience. The show began with a guest performer who Brindisi met during her time on season 22 of “The Voice.” Kara McKee, a Rhode Island native, was a contestant for the team coached by John Legend and made it to the battle rounds before being sent home.

McKee performed five songs, including an original song called “Winter Coat” written by her and her family band Rosemere Road. McKee has a beautifully smooth and almost hypnotic voice and played the guitar to accompany her singing. She is a self-proclaimed lover of sad and melancholy songs, joking with the audience that those kinds of songs are what she sings best.

After her opening performances McKee joined the rest of the audience to enjoy the talents of Brindisi, who is a Massachusetts native, and her band. Brindisi attended Berklee College of Music, which led to her pursuing her initial career as a music therapist and for all of her music career she has written, recorded, and performed original music.

During her introduction Brindisi revealed that she actually attended high school with Kelsey Gibbs, who co-owns Wanderwood with her husband, Matt Silverman, and the connection is what led her to perform in Lincoln County. The band accompanying Brindisi included a bassist, drummer, and keyboard player, two of which she met in high school as well. 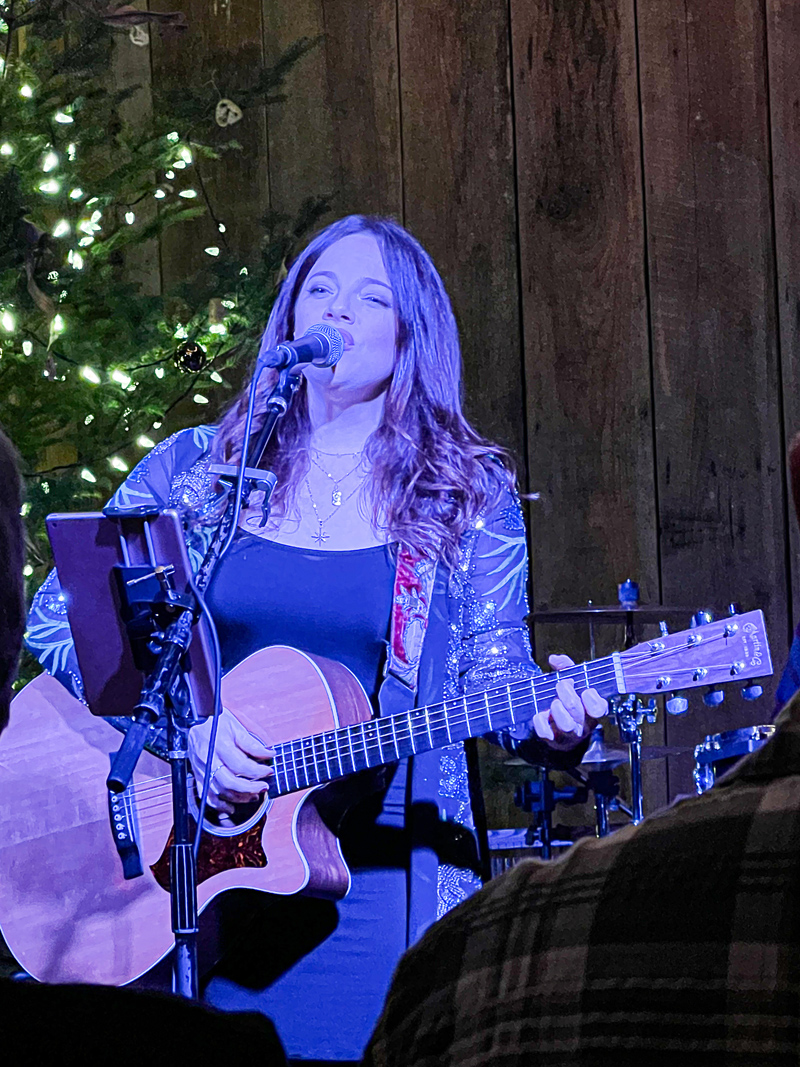 Brindisi’s voice blew the audience away with her rich tone and tremendous vocal range. Her voice seemed to meld to whatever genre of song she was singing and made the entirety of her performance feel so dynamic and full. Each song that was performed had a sentimental attachment in some way and Brindisi took the time to explain that to the audience.

The whole evening wasn’t just about singing for Brindisi; it was about sharing with the audience how she felt and what the different songs meant to her. She made sure that the audience left feeling like they knew her, a quality that not every performer has.

What also made the experience a unique one for the people attending the event was the anecdotes about her time on “The Voice.” Brindisi chose to join the team coached by singer Gwen Stefani when she was given the chance, accrediting the choice to the fact that she grew up listening to Stefani.

Brindisi explained what the audition process was like and shared that while she was only on television for around nine minutes, in reality she was on stage for over an hour hearing feedback from the judges. She performed the songs from her time on “The Voice,” including Taylor Swift’s “All Too Well,” Don Henley and Stevie Nicks’ “Leather and Lace,” and Bonnie Raitt’s “Love Me Like A Man.”

Brindisi was sent home in the knockout round of the show, during which three different musicians from the same team compete but only one advances. She repeatedly mentioned how grateful she was for the experience she had on “The Voice” and reinforced that The Snow Globe Tour wouldn’t have been made possible without it.

After Brindisi and her band finished their performances together McKee joined them on stage for two duets complete with beautiful singing from both, as well as stunning harmonizing.

The final number of the night was the most moving performance out of the entire show. Brindisi stood alone, just a musician and her guitar, and performed Leonard Cohen’s “Hallelujah,” a song she would sing for those who were at the end of their life in hospice as part of her music therapy job. Her angelic voice mesmerized the audience, and each note was packed with so much emotion it was overwhelming at times in the best way possible.

Brindisi will be touring New England for the rest of December. For more information, go to carabrindisi.com.