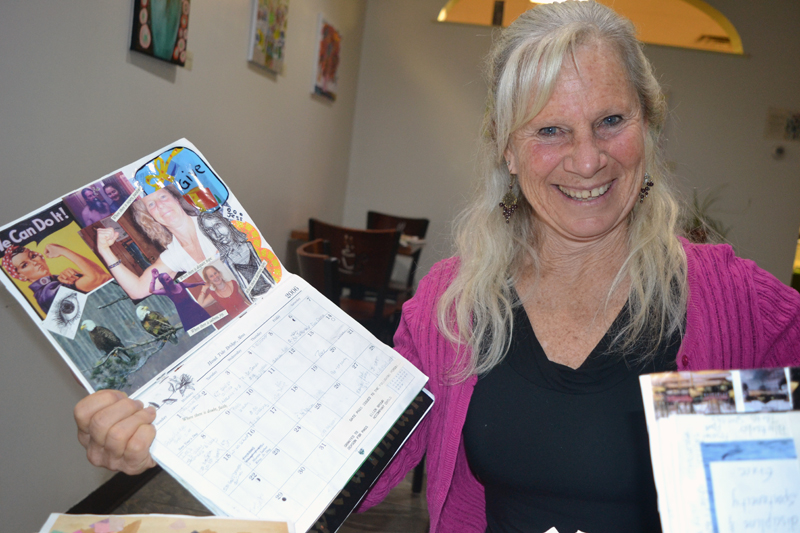 For the last 26 years, Ellen Brown has transformed Lincoln County News calendars – the popular free ones featuring photography of local scenery by the LCN’s Paula Roberts – into elaborate family scrapbooks. Each visually interesting calendar-turned-scrapbook is chock-full of photographs, poems, bits of schoolwork, colorful artwork, and quotes – mementos of the lives of Brown and her close family members.

Some may remember Brown as “Miss A.,” the art teacher at Great Salt Bay Community School in Damariscotta in the early 1980s, when she was Ellen Abramowitz. Brown, who is now a therapist living in Camden, moved to South Bristol in 1981 from Boston.

The impetus for the creation of Brown’s calendar-scrapbooks was a comment made by her daughter, Jess, back in 1993.

“It was my daughter that caught me throwing away a piece of her schoolwork, and she said, ‘How could you?’” Brown said of her now-adult daughter during a recent interview in a Damariscotta cafe. At the time of her comment, Jess was a preschooler attending Damariscotta Montessori School when it was on Lessner Road in Damariscotta, before it moved to its current location in Nobleboro. 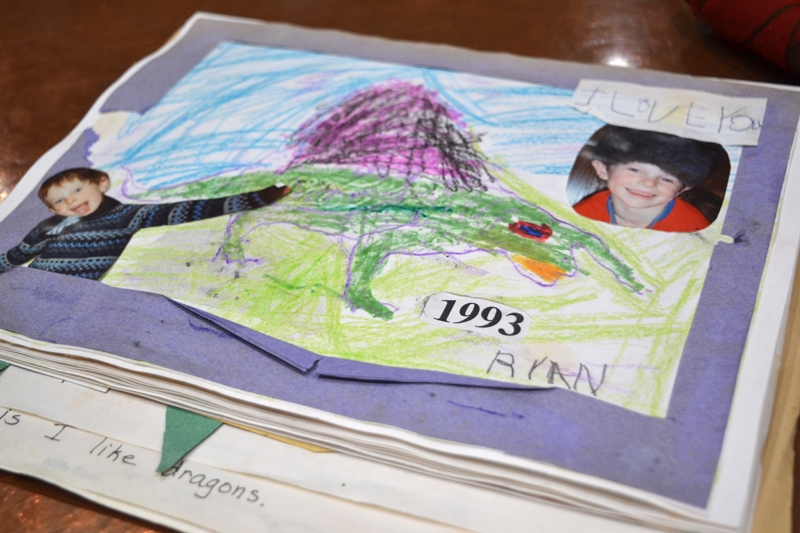 The decorated cover of one of Ellen Brown’s first LCN-calendar-turned-scrapbooks, featuring her son’s artwork and photographs. (Christine LaPado-Breglia photo)

“I started doing one book for her and one book for him,” said Brown, referring to Jess and her older brother, Ryan. “I used Lincoln County News calendars because they were free … It was their size – they’re consistent in size – and they were free and accessible.” Brown said she has all of the LCN-calendar-turned-scrapbooks on a bookshelf in her Camden home.

“It was photos, it was artwork and poetry, and it was schoolwork,” Brown said of what went into the calendar-scrapbooks.

“This was the first day of school,” Brown said, a little wistfully, after flipping to the September page of the 1993 calendar-scrapbook she created for Ryan.

“I would collect stuff all year,” Brown said of her approach to making each year’s calendar-scrapbook. “I would never get caught throwing anything away again.” 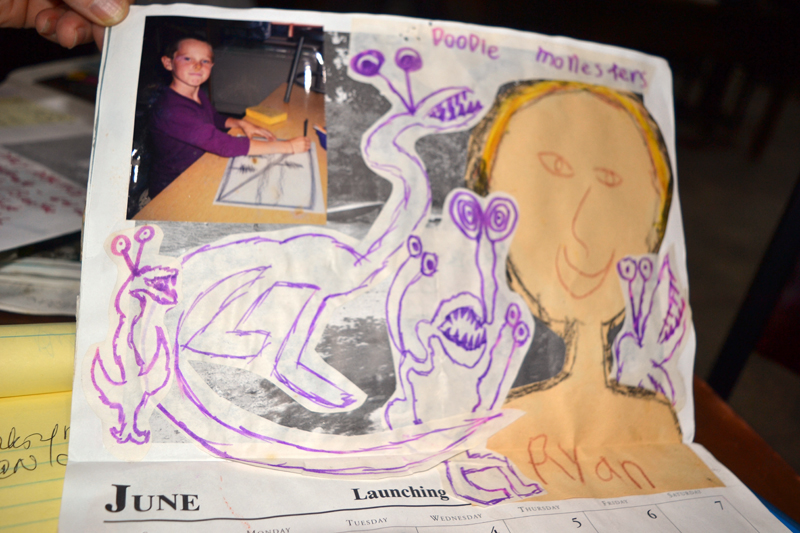 Her “ritual,” she said, was that on New Year’s Day of each year, she would assemble photos and so on from the previous year to create that year’s new scrapbook from a brand-new LCN calendar.

“I love my famle and my famle loves me,” reads a charming piece of writing by a 12-year-old Ryan decorated with a purple, a pink, and a turquoise heart on the September page of the 1998 LCN calendar. 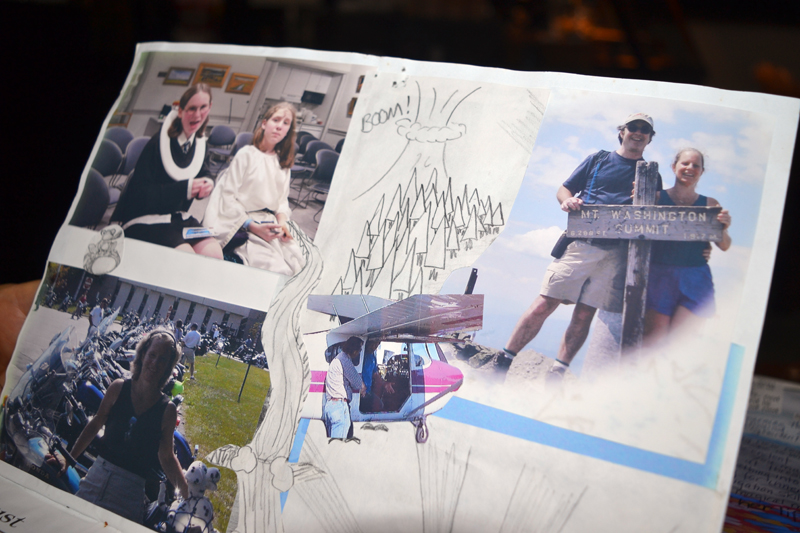 Brown said she changed her scrapbook-making approach somewhat in 2006, following the untimely death of her husband, Phil Brown, in April 2005 due to a scuba-diving accident. 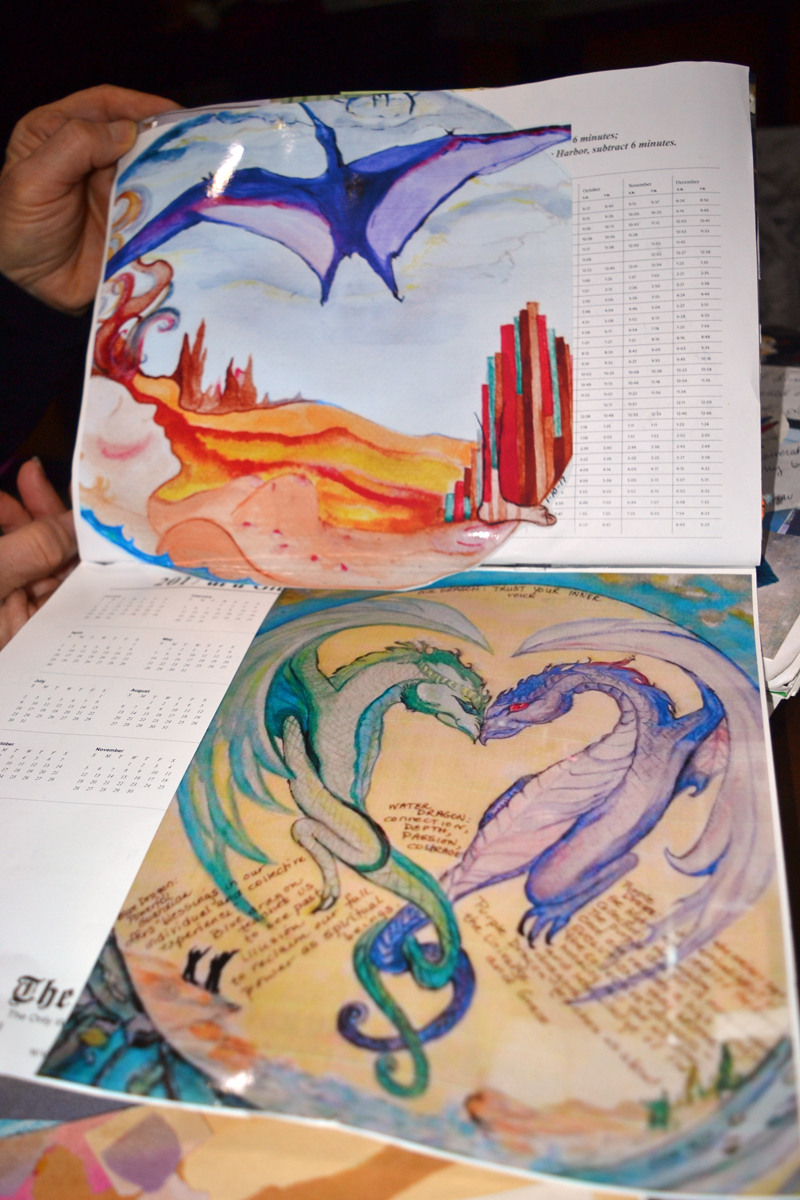 So Brown began assembling her calendar-scrapbooks month by month, with mementos that she accumulated each month and notes about particular activities written on pertinent dates. Some of what she included in 2006 were reflections on the grief she was processing after her husband’s death. “May those memories comfort and sustain you in the days and years ahead,” reads one handwritten entry in February 2006.

“I go through month by month, and also, important things I put on the front and back covers. I cover every piece of each calendar,” said Brown.

One of Brown’s more recent calendar-scrapbooks features particularly lovely and colorful artwork on the last two pages made by Brown herself.

Another change Brown made in her scrapbook-making approach over the years was to reduce the number of books she made each year from one for each child to one family calendar-scrapbook. Yet another evolution of her method was to shift the focus of each scrapbook from her children to herself after they moved out of the house and went off to college.

“The kids moved out, they went to college, they grew up,” she said. “So then the calendars were all about me.”

Turning to the January page of her 2017 LCN calendar-scrapbook, featuring images of Brown visiting Machu Picchu, in southern Peru, she said, smiling, “I started traveling in my old age.”

“These are very much a journal, an evolution of my life,” Brown said of the calendar-scrapbooks, which she continues to make. “It’s like an art journal, spiritual growth.”

Brown compared her multifaceted calendar-scrapbooks to photo albums. “You save photos in photo albums, but you don’t save the quotes typically,” she observed.

“I never knew how precious this would be,” she said. “The greatest part is I go through these and there are the memories.”