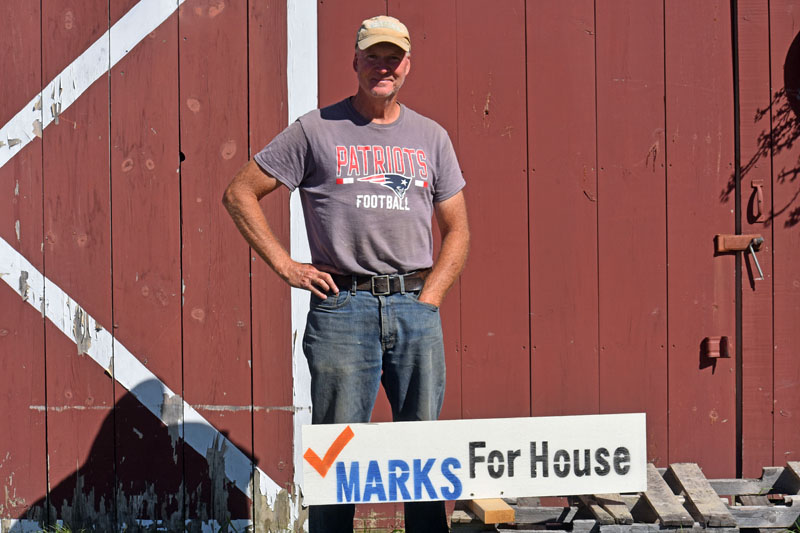 “I’m a very moderate Democrat. I’m pro-Second Amendment. I love my guns and I am fiscally conservative,” Marks said.

The district includes Alna and Wiscasset in Lincoln County, as well as Pittston and Randolph in Kennebec County.

“I enjoyed it so much last time I decided to run again. I thought I was effective,” Marks said.

“We never really fully funded education and we really need to do that,” he said. “As a police officer, I always supported education. An educated person is far less likely to commit a crime.”

“I’m not a huge fan of charter schools,” he said. “I feel like they could take some of the public money off of the table.”

Regarding the state government’s looming revenue shortfall, Marks said he wants to avoid raising taxes, but also wants to limit impacts on state employees, who are often the first targets as budgets are rolled back.

“Furloughs, hiring freezes, no pay raises — that is where we always start,” Marks said.

Marks, who grew up in Pittston, was a state trooper for 25 years before retiring in 2011. He later worked security at MaineGeneral Health in Augusta for five years.

Working in law enforcement, Marks was aware of mental health issues in the community, but he gained a clearer understanding of the problem from working at the hospital in Augusta.

“As a trooper you respond to calls for people in crisis, but it was about once a month and I didn’t understand the prevalence of these types of issues until I worked at the hospital. It really opened my eyes to how many people are going through this,” Marks said.

“Right now there are only so many services and there are so few beds dedicated to mental health that there often is no place for people in crisis to go but the emergency room. We need to do a better job to ensure people don’t fall through the cracks,” he said.

Marks pointed to an Augusta Police Department program that involves a crisis worker riding around with patrol officers on weekends as an excellent idea and a way to help law enforcement peacefully resolve mental health-related calls.

“They are riding along for their expertise, their ability to recognize when someone is in crisis and what is the proper program to direct them to,” Marks said.

“As an officer, it is nice to have a trained professional ride along with you and help determine what to do in those situations,” he said.

Marks represented House District 53 from 2012-2014. The district included Alna, Dresden, Pittston, and Wiscasset. After the 2013 reapportionment of legislative districts, Marks found himself in District 87, with Dresden swapped for Randolph.

He lost his reelection bid to Hanley by about 200 votes in the first matchup between the two candidates, six years ago.

Marks reflected fondly on his first term in the Legislature and said he led efforts to impose harsher penalties for repeat offenses of operating under the influence.

“LePage vetoed the bill but the Legislature overrode the veto. It ensured penalties for repeat offenders. In the past, after several years, someone could get a couple OUIs and they wouldn’t count as repeat offenses,” Marks said.

Marks was also able to work on legislation to expand the state’s turkey hunting season.

He was on the Criminal Justice and Public Safety Committee and the Inland Fisheries and Wildlife Committee.

Marks graduated from Gardiner High School and the University of Maine at Augusta with a degree in criminal justice.

He started to study political science through the University of Maine at Fort Kent, but opted to pursue a career in law enforcement instead.

During his time with the State Police, he appeared on the radio station 92 Moose for a segment called “Tea Time with Trooper Tim,” answering questions from listeners.

Marks currently represents the public on the grievance commission for the Maine Board of Overseers of the Bar. The commission resolves complaints against lawyers for violations of the Code of Professional Responsibility. It hears about 5,000 complaints per year.

Marks comes from a family of state troopers. He is married and has four children. During his spare time, he enjoys coaching sports, hunting, fishing, and tending his vegetable garden.