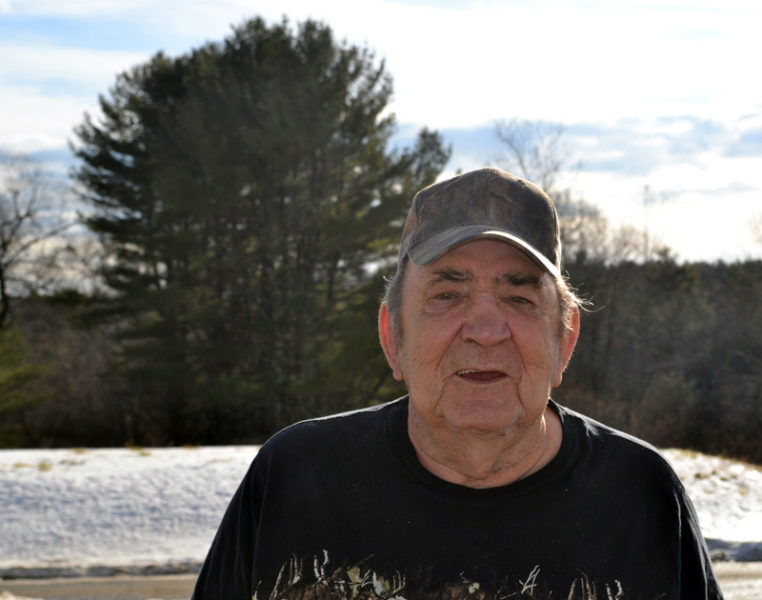 Moose, bears, foxes, and bobcats were a few of the sights former Maine guide Gerry Landry took professional photographers from throughout the Northeast deep into the Maine wilderness to see. Landry’s career stemmed from a deep-seeded connection to the natural world, he said.

His father, a Passamaquoddy and Penobscot Indian, often said Landry was addicted to the woods. Though he is now retired and living at the Country Manor Nursing Home in Whitefield, Landry’s reverence for nature carries on, he said.

Even at the nursing home, which is sandwiched between the busy roads of Main Street and Route 17 in Coopers Mills, wildlife and nature are ever-present, and, when recognized, it lights up the place, Landry said.

The emotions that sweep through him when he sees birds fly or the occasional fox wander across Country Manor’s lawn are just as poignant now as when he was in the wild, he said.

He tries to share this feeling with the residents and staff at Country Manor by teaching them to recognize and respect the nature that surrounds them, as he did when he was a Maine guide traversing the Allagash wilderness and the Kennebec River watershed, he said.

Landry was raised on a dairy farm in Albion, one of 12 children. Both his parents were part Passamaquoddy and part Penobscot. Several of his neighbors and members of his community were also American Indian, Landry said.

His family carried on some of the tribal traditions, the most important being to help each other, he said.

Landry recalled a neighbor his family used to cut wood for. The neighbor sold Landry’s father a plot of land for only the money that was in his father’s wallet, which was about $10, because she knew the land would be cared for, Landry said.

One of his neighbors when he was growing up, Fred King, also Passamaquoddy, offered to teach Landry about guiding in the woods and living off the land. Through King, Landry learned to not only survive in the harsh terrain and severe conditions of the natural world, but to love and respect it, he said.

“It is beautiful but it can be rough,” Landry said. “It is not easy to learn how to use the land in your favor. He taught me how to love it and enjoy it.”

One season, Landry and King obtained a moose-hunting permit, but when Landry saw a moose, he could not bring himself to shoot it. “My respect and love for that animal came out,” he said.

By the time Landry graduated high school, he knew what his future path would be. He obtained a Maine guide’s license and helped show others the beauty of Maine’s woods, rocks, and wildlife.

Professional photographers from throughout the Northeast sought out Landry because of the wildlife they would see when they accompanied him on a trip through the woods, Landry said.

The Allagash and the Ashland area in Aroostook County, as well as Bingham and Lexington in Somerset County, were some of Landry’s favorite places to guide, he said.

There was no one animal in particular that was the focus of the trips he would take people on. Each animal is special, he said. Landry, however, particularly loved to see bobcats.

Landry taught the people he took out in the woods how to listen and behave so animals would reveal themselves.

“Quietness and respect,” Landry said, were the two most important things he taught people about. “When you recognize and love the animals,” they will make themselves known, he said.

People would often ask Landry to take them on hunting trips. He declined. Landry said there may be a need for hunting to curb overpopulation of a species, or for food, but he would not help people hunt for sport.

Landry had too much love for the animals and got too much enjoyment from just watching them, he said.

Landry has long since retired from his guiding days. Diagnosed with Parkinson’s disease and epilepsy, long trips into the woods are no longer possible.

He moved into the Country Manor Nursing Home to be cared for and near family, he said.

Landry still has the same love and gets the same enjoyment from watching the animals, be they squirrels, birds, porcupines, or skunks, he said.

“Just outside here, just outside the back door, it’s wonderful and beautiful,” Landry said. “I wish people could understand, just looking at a tree, or seeing a bird having some breakfast … it is pure pleasure.”