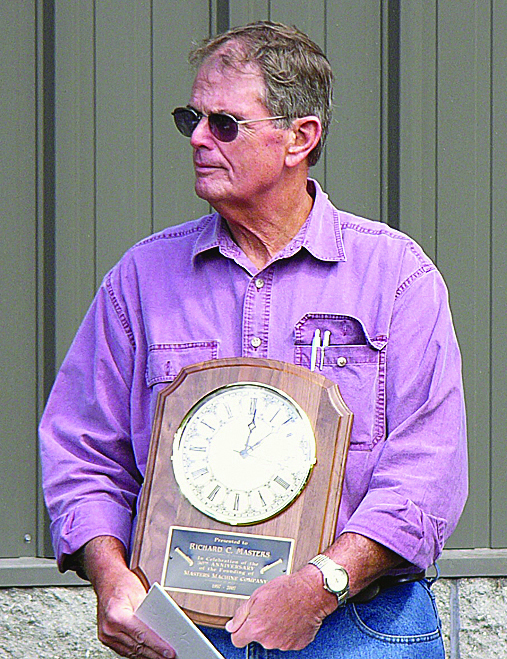 Born to George S. Masters and Edith Mae Masters at Miles Memorial Hospital in Damariscotta May 21, 1941, Richard Masters went to work for his father’s business at the age of 16, a year after the company opened its doors in 1957.

George Masters Sr. founded Masters Machine Company in an old schoolhouse in Round Pond with the goal of creating machined products for local businesses. Richard Masters would work for the company for 23 years before taking over as president, when his father retired in 1981.

In that time, Richard Masters worked as a machine operator, department manager, and plant manager.

During Masters’ tenure with the company, the business expanded from the one room school house with three employees into a modern multi-lab facility with 100 employees.

Richard Masters’ son, Steven Masters, is currently the president of the family business and worked with his father for 35 years. “The biggest thing I can think of when it comes to my father is his emotional intelligence and emotional stability,” Steven Masters said. “How he could navigate his way through a lot of very difficult things and always keep the big picture in mind.”

“Masters Machine was a big part of his life and his identity,” Richard’s daughter, Marianne Masters, said. “In some ways, he couldn’t quite leave it.”

From an early age Richard Masters gained a reputation of possessing a great work ethic. As a teen he mowed lawns, fished, and worked for local businesses.

He attended Washington School in Round Pond until its closure in 1954, and graduated from Bristol High School in 1959.

While Masters’ influence did not go unnoticed in the community, he was not interested in being a public figure. He was a quiet member of the Bristol Masonic Lodge No. 74; maintaining his membership and proving financial aid for members in need, but he did not make regular appearances.

“He would quietly lend out money or cosign a loan for members of the community and would never say anything,” Marianne Masters said. “People from the community would come up to us and say something and we had no idea he had loaned them money.”

“He was a soft presence in the community, he was not looking for visibility,” Steven Masters said.

Despite operating one of the largest companies in Lincoln County, Steven and Marianne remembered Masters as a loving father who was always available.

“He always found plenty of time for us,” Marianne Masters said. “He never shared that he was stressed out at work, even when it was obvious that he was.”

“His family was his most important thing to him,” Steven Masters said.

Marianne Masters said the love her father had for his family was not limited to humans. It also extended to the pets his family adopted throughout his life. Marianne said her father would offer a typical father’s reaction whenever the family would adopt a new pet.

“He would be against getting a new pet saying ‘we don’t need another pet,’ but the second we adopted one he fell in love with it immediately,” she said.

Marianne recalled a time when she and her brother decided to adopt two horses. Richard Masters was not initially sold on the idea, but after the horses were adopted, Marianne said her father loved to feed, brush, and groom the animals.

In retirement, Richard Masters enjoyed relaxing at his summer home in Venice, Fla., which he originally purchased for his father.

“I think it was the one place he could relax and really get away from work,” Marianne Masters said.

One experience Marianne Master particularly enjoyed with her father was a trip to Disney World approximately 30 years ago. Richard Masters approached the trip with an open mind and some blissful ignorance.

“We went on Space Mountain and I don’t think he knew it was a roller coaster because his language was quite colorful throughout the whole ride,” Marianne Masters said.

Richard Masters was laid to rest following a private ceremony with family on Thursday, Nov. 3 at the Little Brown Church. A celebration of life open to the public, followed at Harbor View House in Round Pond.