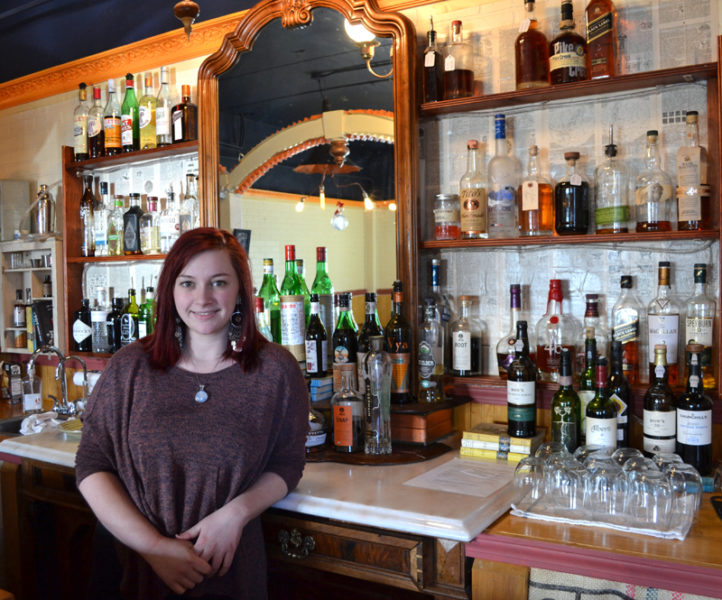 Meredith King, the new owner of Van Lloyd’s Bistro in downtown Damariscotta, at the restaurant’s bar on Monday, Jan. 9. King had been an employee of the restaurant since it opened in June 2014. (Maia Zewert photo)

Since Van Lloyd’s Bistro opened in downtown Damariscotta in June 2014, Meredith King has worn a number of different hats for the restaurant, doing everything from waiting tables in the dining room to creating desserts in the kitchen. On Jan. 1, King added a new title: owner.

While she dreamed of owning a restaurant one day, King, of Damariscotta, said the opportunity presented itself much earlier than expected.

“It’s something I’ve always wanted, but I just thought it would be in 10 years or so,” King said.

The “unique” opportunity presented itself in the fall, when Bernie DeLisle, the owner at the time, decided to sell the restaurant. King had worked alongside DeLisle since the restaurant opened.

In addition, King has been close friends with Olivia DeLisle, Bernie DeLisle’s daughter, since she was 10 years old. King grew up in Walpole and attended South Bristol School. She attended Lincoln Academy during her freshman year.

After moving to Denmark for a year, King moved to Hallowell, where she completed her junior and senior years of high school and graduated at the age of 16.

After high school, she moved to Baton Rouge to attend Louisiana State University. She took creative writing classes, but knew her heart was in the restaurant business.

After a year at LSU, King decided to leave the academic world and get her culinary education through working in the food industry. She started as a cashier at a taco restaurant in Louisiana, where she rose through the ranks and earned a spot in the kitchen.

Three years into her time in Baton Rouge, King found herself missing Maine.

“There’s a sense of community here that you can’t really find anywhere else,” King said. “I loved Louisiana, and I established roots during my time there, but there wasn’t a lot of outside space that was accessible like there is here. I missed being outside, I missed the landscape, and I missed the people.”

When she was considering moving back to the area, King reached out to Olivia DeLisle, who told her about Van Lloyd’s Bistro. King moved back to Maine a week before the restaurant opened and started as a server on opening day.

Since opening more than two years ago, Van Lloyd’s Bistro has received recognition for, among other things, its eclectic and rotating menu. Down East magazine’s April 2015 cover story named the restaurant one of “Maine’s Best New Restaurants,” calling the bistro a “cozy, unexpected find on the Damariscotta waterfront.”

King said the atmosphere in the Van Lloyd’s Bistro kitchen is unlike anything she has experienced during her time in the industry.

“It’s such a great team effort here, and that, honestly, is one of the biggest things that makes us successful,” King said. “We all work together on one meal to make sure it’s the best it can be.”

Van Lloyd’s Bistro seats 22 people in the dining room and four at the bar. During the warmer months, the outside porch has nine seats available.

The restaurant’s size is a factor in its success, giving the staff the creative space to try new things, King said.

“We have more room and freedom to experiment and play with the meals,” King said. “We want to put time and effort into everything that goes out. Our service is able to be what it is because of the food.”

During her time at Van Lloyd’s Bistro, King transitioned from serving to working on pastries and desserts alongside Torie DeLisle, one of the co-owners of the business at the time. Torie DeLisle is married to August DeLisle, Bernie DeLisle’s son.

Over time, King started bartending, learning to make some of the craft cocktails Van Lloyd’s Bistro is known for.

“I’m all about the education that comes from the opportunities, so I worked my way through all the positions to learn as much as I could,” King said.

A good portion of King’s education came from working alongside Bernie DeLisle, a restaurateur with more than 35 years of experience.

“Bernie’s an amazing mentor, and I learned so much from him,” King said. “He just knows so much, and he was willing to share it with me.”

Over the summer, Bernie DeLisle started sharing more and more responsibility with King, she said. When he approached her about the possibility of buying the restaurant, the answer came pretty quickly.

“I feel so connected and invested in this business. This has basically been my second home since I moved back,” King said. “I couldn’t stand by and let someone else buy it, because then it wouldn’t be Van Lloyd’s anymore. The new owners would make it their own. It’d be like letting someone else into your home.”

King’s father, Gary King, is her financial partner in the business. The deal closed Dec. 27 and Bernie DeLisle stayed on as owner until Dec. 31. When the restaurant reopens after winter break, DeLisle will stay in the kitchen for six weeks to ease the transition and will remain with the restaurant in an advisory role for the first year, King said.

One of the things King is looking forward to most is working with the local businesses in town. Van Lloyd’s Bistro uses ingredients from area farms and stores when creating its menu.

The customers have also been supportive of King, she said. Van Lloyd’s has a number of regulars who support the business and, in doing so, develop friendships with those who work there. On her 21st birthday, a couple who frequents the restaurant took King out for dinner to celebrate.

“There’s a large number of people you feel close to, just because they come in to eat here regularly,” King said. “You develop bonds and become friends with them.”

The restaurant will reopen Tuesday, Jan. 17. King and her boyfriend, Richard Baird, have kept busy with painting and deep-cleaning the restaurant in preparation for reopening.

The Damariscotta Board of Selectmen approved a liquor license for the restaurant under new ownership during its meeting Wednesday, Jan. 4.

While King has plans for some additions to the restaurant’s offerings down the road, she said she plans to keep the same eclectic atmosphere Van Lloyd’s has become known for.

“When they started, August and Torie brought a lot of the modern food trends, craft cocktails, and a young, modern outlook, while Bernie brought his experience and this old school-style look at how the business works,” King said. “Those two things combined is what’s happening now. It’s good, well-known food with a modern edge, and it wouldn’t be happening without all three of them and the elements that they each brought to the table.”

“It’s really important we keep that going, because it’s what makes us unique,” King said.