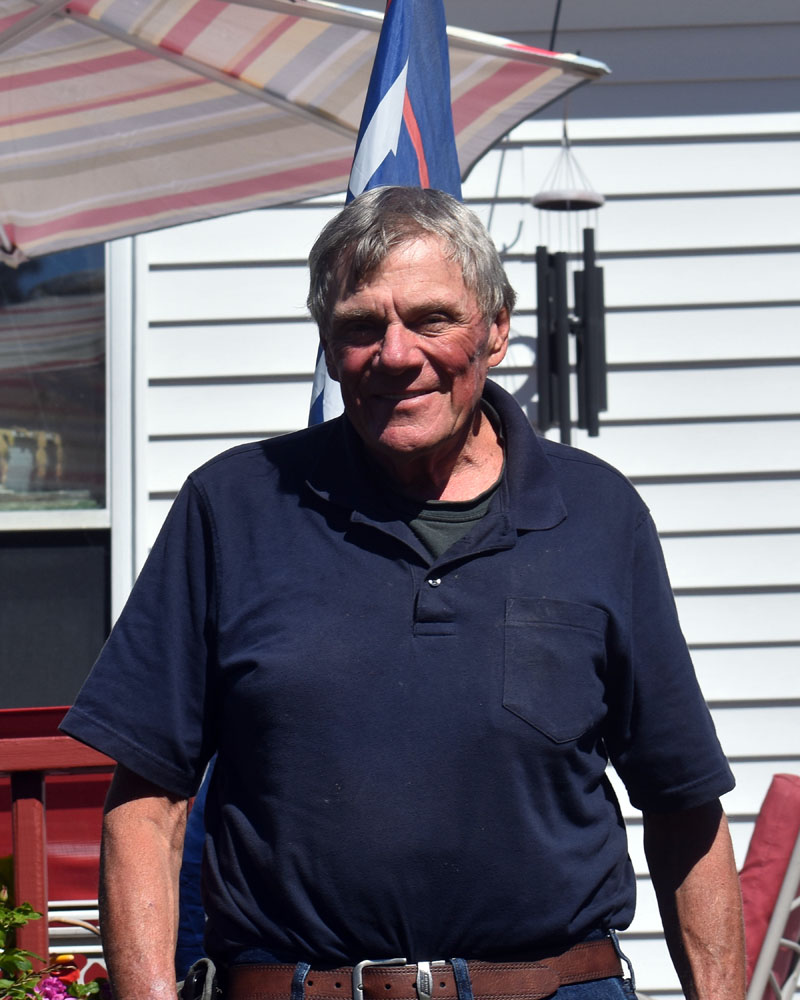 Wallace describes himself as a longtime Waldoboro resident and an advocate for the area’s commercial fishing industry. He said he is very fiscally conservative.

Wallace, who is retired, said he allows shellfish harvesters to access the Medomak River’s mudflats through his property and he helps out with his son’s lobstering business in Friendship.

“I was born and raised in Waldoboro. I live on a repurposed homestead that has been in my family for years,” Wallace said, explaining that he bought property on Friendship Road that had been owned by his grandfather, aunt, and uncle.

Wallace helps to maintain four-wheeler and snowmobile trails on and around his property.

“I do a lot of work gathering firewood for my family and myself on my property, but I also keep busy on all the trails,” he said.

In addition to his time on the board of selectmen, he is a past chair of the town’s shellfish conservation committee. He is proud of his work to draft a new shellfish ordinance for Waldoboro.

“We did a lot of work to come up with a model that applied specifically to Waldoboro and protected the river,” Wallace said.

Wallace was inspired to seek election because of his concerns about the leadership of Gov. Janet Mills.

“We have a serious budget issue on the rise and we need to work to address it,” he said. “I would like to do my part and try to get a handle on the budget.”

Wallace said that in order to address the state’s projected revenue shortfall, the state needs to be accountable and target administrative expenses first. Avoiding a tax hike, he said, will help residents and Maine businesses in a difficult time.

“A little foresight would have helped with this. Raising taxes should not be an option,” he said.

Wallace believes his history in town makes him an approachable figure, one constituents can bring their concerns to.

“I think people feel they can call me and talk to me about their issues. I’m easy to approach and willing to help,” Wallace said. “I’ve never not tried to help someone that has asked, whether it was a neighbor or a tourist who ran out of gas.”

Wallace hopes to serve on the Marine Resources Committee or the Taxation Committee.

“Wherever I end up, my top priority will be my constituents and focusing on the issues that are most important to them,” he said.

If he sits on the Marine Resources Committee, he wants to help the lobster and shellfish industries recover from the pandemic’s economic toll. He said the pandemic has devastated both industries, which are major employers in the district — especially the lobster industry in Friendship and the clamming industry in Waldoboro.

“I am very concerned about the impact on our coastal communities,” Wallace said.

He said excessive regulations, specifically those dealing with right whales, are hampering lobstermen’s efforts to recover from the impact of restaurant closures and the subsequent dip in the price of lobsters.

“Fishermen got hit with a double whammy,” he said.

“Socially it is extremely important for building relationships and learning to communicate,” he said.

Wallace, whose professional background is in the retail and wholesale industries, said he worked for several companies in Maine, New Hampshire, Massachusetts, and Connecticut before retiring about five years ago.

His last retail job was as a district manager with Renys.

He is a veteran of the U.S. Air Force whose four years of service included one year in Vietnam during the Vietnam War, in an administrative role in Cam Ranh Bay.

He was a selectman for two three-year terms when Lee Smith was town manager.

In his spare time, Wallace enjoys playing pool at Riverside Billiards, a pool hall on Route 32 in Waldoboro.