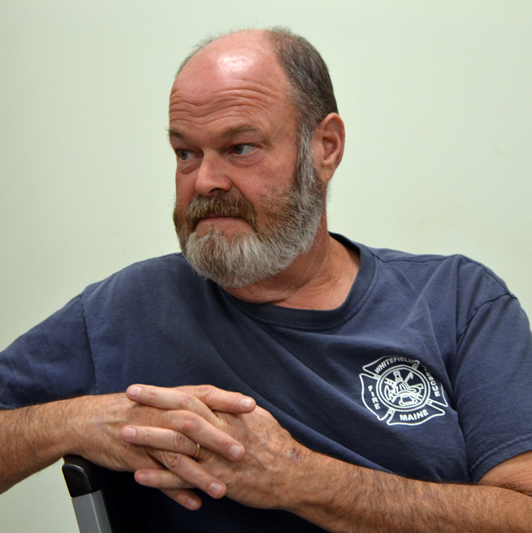 Then Whitefield Fire Chief Scott Higgins listens to a discussion regarding safety measures related to horse-and-buggy traffic during a Whitefield Select Board meeting in October 2017. (LCN file)

Higgins, 63, reportedly experienced a medical event while operating a school bus for the Jefferson Village School early Monday morning. School officials confirmed there were no students on the bus at the time.

The loss of Higgins follows close on the heels on the equally unexpected death of Bremen Fire Chief Donnie Leeman on Sept. 17. Like Leeman, Higgins was a highly regarded figure among his local firefighting peers.

During the same period, Higgins also built a lengthy career as a school bus driver for the Jefferson Village School. Higgins coordinated the school’s bus fleet and drove for the school for 23 years, according to AOS 93 Superintendent Lynsey Johnston.

Speaking for a stunned school community on Tuesday, Oct. 18, Johnston said some current JVS staff members once rode to school on a bus Higgins drove.

Whitefield Fire Chief Jesse Barton said he hopes to speak to the Higgins family this week. Barton first met Higgins in 2005 when Barton was just coming in as the part of the departments’ explorer program. 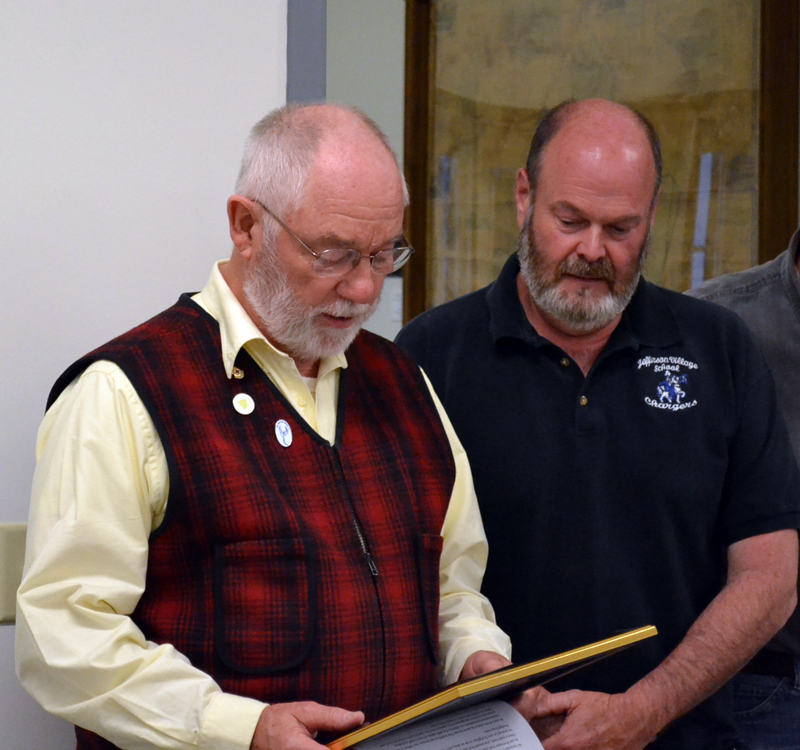 Selectman Frank Ober (left) presents Whitefield Fire and Rescue Chief Scott Higgins with a letter of appreciation from the Whitefield Select Board on May 11, 2011. The letter recognized the department for their response to four separate structure fires in a single week over the winter. (LCN file)

“He was a helluva man,” Barton said.

In a written statement, Whitefield Fire Department Lt. Aaron Miller credited Higgins for inspiring him to joining the fire department later in life. Miller said he met Higgins when Miller began working as an administrative assistant for Whitefield in 2012.

“I distinctly remember telling Scott I wanted to join the fire service because of him, his team, and my commitment to public service,” Miller said. “He told me that I had just made his day.”

Higgins’s dedication and experience were a major benefit to the town Miller said. Higgins’ planning skills and experience often helped him know what the department would need at a scene before anyone actually arrived on the scene.

“Scott had many traits of a great leader that his crew looked up to – experience, couth, emotional intelligence, confidence, and character,” Miller said. “We deal with stressful situations in the fire service and regardless of those challenges, Scott kept bad calls from getting worse.”

Higgins was an outstanding commander, Miller said, one who mixed professionalism with empathy.

“I remember one time, at a structure fire, he asked me to go inside a smoke-filled home to find a pair of shoes for a homeowner who was standing outside barefoot,” Miller said. “He cared about people.”