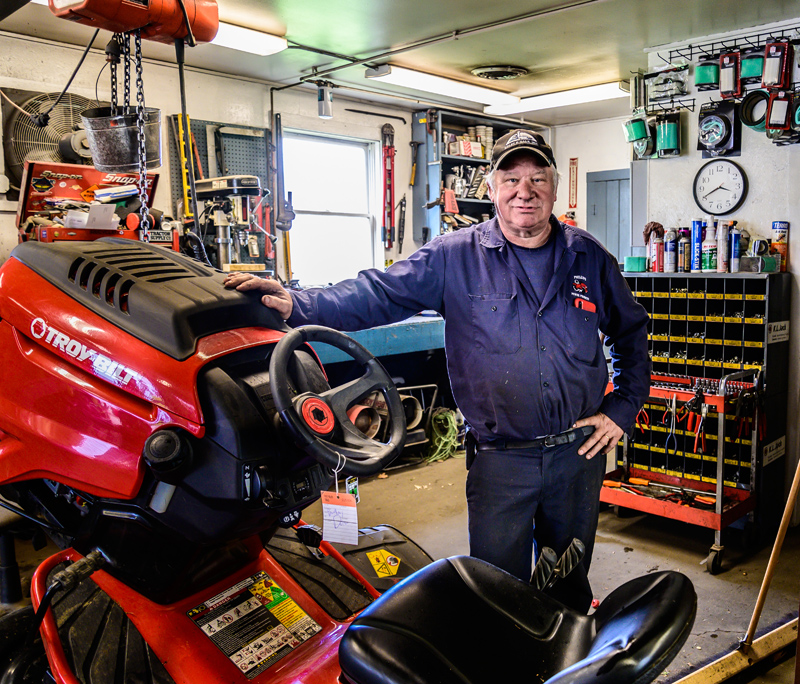 Jay Verney leans against a Troy-Bilt tractor at Phillips Power Products, a division of Colby & Gale, in Damariscotta on Friday, May 14. Verney retired from Colby & Gale on Tuesday, May 18, after exactly 40 years. (Bisi Cameron Yee photo)

On May 18, 1981, Jay Verney started working for Colby & Gale Inc. in Damariscotta. After exactly 40 years of fixing tractors in the summer and hauling propane in the winter, he retired Tuesday, May 18, 2021.

Colby & Gale is a family-owned and family-run fuel and propane delivery and service company with headquarters in Damariscotta. The company has served Lincoln County for 75 years. Jay Verney has been there for more than half of them.

Jay Verney started out with Phillips Power Products, a division of Colby & Gale. He worked there six days a week, although he gets off at noon on Saturdays. He said when he started there were only three people on staff, but now there are five or six “because business has grown so much.”

Jay Verney said everyone at Phillips works together, selling parts, helping customers, completing repairs. He specialized in riding mowers and tractors. “It’s my glitch, I guess — there’s a lot of electrical problems and I’m pretty good at fixing electrical problems,” he said.

He didn’t go to school to learn the skills that gave him his career, but the company sent him to conferences in Florida and classes in Portland. And he was always into mechanical work. “I had my own tools,” he said.

He got a chance to visit the Toro factory in Minnesota and said the brand is a bestseller. He remembers when Toro would never sell to the big-box companies, but said those days are gone. “They gave in,” he said.

Jay Verney said Phillips Power Products has remained competitive despite its small size. He cites “our reputation for quick turnaround, good service, pickup and delivery. We’re hanging in there.” 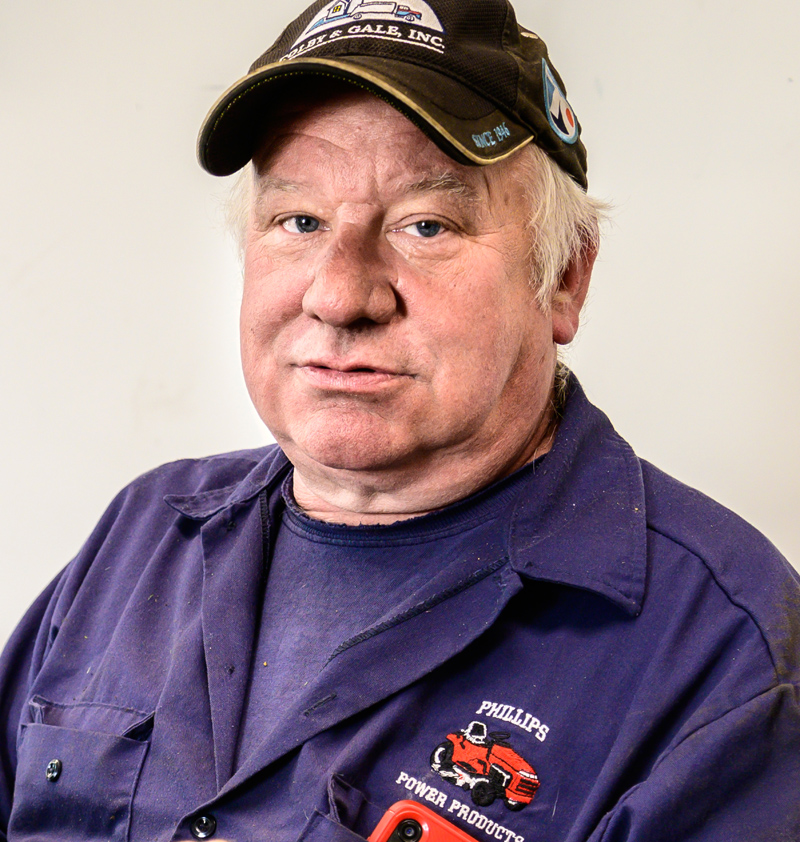 Jay Verney poses for a photo at Phillips Power Products, a division of Colby & Gale, in Damariscotta on Friday, May 14. For 40 years, Verney sold and repaired tractors and mowers during the mowing season and switched to fuel delivery for the winter. (Bisi Cameron Yee photo)

On the fuel delivery side, he starts at 7 a.m., gets his delivery tickets, jumps in his truck, and clears as many tickets as possible by the end of the day. He likes being his own boss on the road and said he has serviced every town in the county and then some.

He said it gets tricky sometimes, getting up icy driveways in winter, hauling the heavy hose through the snow to the tank. Sometimes the tanks are underground and he has to hunt to find them. He said it helps a lot when customers keep a clean path to the tank.

Delivering fuel is a solitary job, but he likes it. “You don’t see many customers,” he said. “You’re up there in your truck all alone, you got the radio — it’s just freedom, driving around and seeing the sights.”

He liked switching jobs seasonally. “It’s a pretty good deal,” he said. “When I get sick of hauling the hose, I come in here and start a whole ‘nother thing. And then I get sick of this and it’s time to go back on the truck. I don’t think I’d want to be stuck in one place the whole year.”

“Jay taught me a lot about mechanics and how to approach different problems,” Deric Verney said. “We’re going to miss him a lot — his knowledge and his personality, his expertise. He’s a big part of the company — those will be hard shoes to fill.”

Verne Verney, a former co-owner as well as a cousin and current co-worker of Jay Verney’s who has worked with Colby & Gale since 1979, said, “Jay is just a smart guy — he could figure out any problem. He can’t be replaced.”

Jay Verney grew up in Alna and, after meeting his wife and raising two stepsons and a daughter in Newcastle, returned to Alna and bought a 7-acre horse farm. His wife manages the horses, Percherons that are available for weddings and parades. The big horses also pull sleighs and carts for the Wiscasset, Waterville & Farmington Railway.

The horses are his wife’s passion, but “I help out,” he said, although he admits, “I’m more of a snowmobile, boat, or something-with-a-motor-on-it person.”

As far as his post-Colby & Gale plans, “I’m going to call it partially retiring,” he said. He plans to continue working winters on the fuel delivery side. “I’ll come back Dec. 1 and do it for a few more years,” he said.

But he is ready to move on from the grime of mechanical work. “I’m tired of rinsing — coming home dirty every night for 40 years. When I’m hauling propane, I’m clean,” he said.

He plans to spend his summers helping his wife with the horses; working with his brother, who owns Jeffrey Verney Construction; building up the sawmill business his father left him; and spending a little more time with his five grandchildren.

Jay Verney said he never planned on staying with Colby & Gale so long. But with good pay and good benefits, he didn’t see a reason to make a change. Until now, on his 40th anniversary of employment. “It’s a good landmark to retire,” he said.