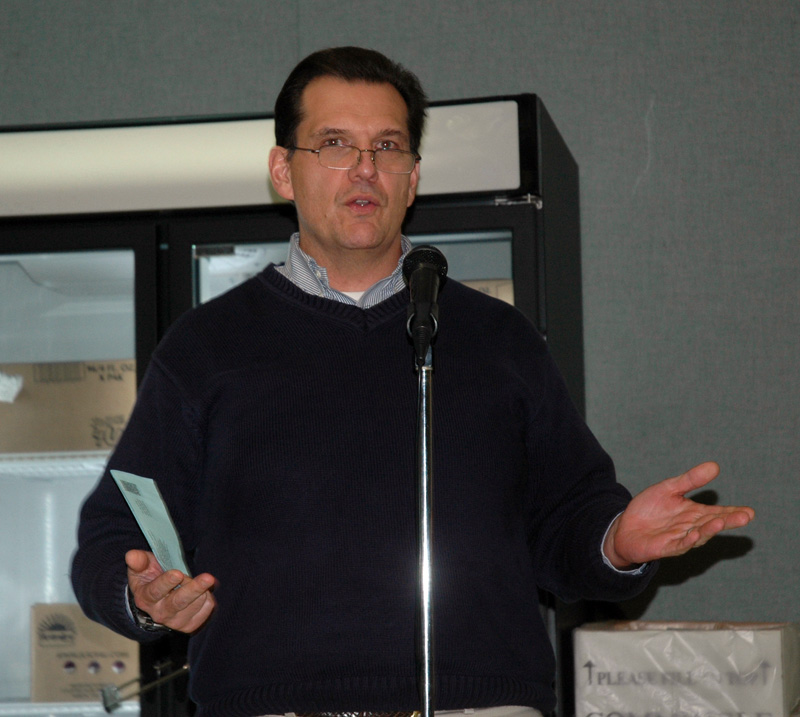 Bill Card, of Bristol, a member of the Lincoln Academy Class of 1980, speaks during the AOS 93 forum about Lincoln Academy at Great Salt Bay Community School in Damariscotta on Wednesday, Nov. 15. (Alexander Violo photo)

The community’s desire for more transparency around Lincoln Academy’s finances was the foremost concern expressed during AOS 93’s public forum about Lincoln Academy on Wednesday, Nov. 15.

The AOS 93 Board held the forum to gather input from area residents and share information on secondary education in the district. The forum took place in the gymnasium of Great Salt Bay Community School in Damariscotta.

The board organized the forum after hearing concerns at its meetings about LA and the nature of the relationship between the private high school and the public school district.

The AOS 93 Board is also conducting a survey on the matter, available at aos93.org and at schools and town offices in the district.

About 85 people attended the forum. For nearly two hours, residents discussed the state of the relationship between AOS 93 and LA. In addition to many comments about the desire for more transparency regarding the academy’s finances, there were several comments about a desire to maintain the quality of education local students receive at LA.

AOS 93 Board Chair Joshua Hatch, of Nobleboro, said that while Lincoln Academy is private, the elected school committees in the seven AOS 93 towns still have a responsibility regarding secondary education.

“We are elected to oversee public education, K-12, for our kids, our taxpayers, and our towns to make sure the money we are spending is being spent the best it can be to get the most bang for our buck,” Hatch said.

Hatch said the forum was not solely a place to hear complaints about LA.

“Great stuff happens at Lincoln Academy every day and we want to make sure people know that and also publicly state we all care about improving academic success and the experience of our kids in AOS 93 all the way through. I think we’ve neglected this relationship with Lincoln Academy too long using the excuse it’s just a private school,” Hatch said.

“Our kids bring out the passion in us,” Hatch said. “There’s not much I care more about than my children, seeing them do well and having opportunities to succeed. The financial component is just a part of this. Support for academics is the biggest concern.

“The biggest piece of the process is getting support. Instead of millions invested in physical structures and breathtaking fields, let’s see that kind of commitment to teachers and professional development to see a school that at its core is an academic powerhouse.”

At the opening of the forum, AOS 93 Board member Christa Thorpe, of Bremen, said the board members were there to listen to their constituents.

“We are going to open up the floor to the public to discuss the relationship between Lincoln Academy and the sending towns for the purpose of hearing your stories,” Thorpe said.

Hatch said he wanted the forum and subsequent action to be constructive and to turn the unique relationship between LA and the AOS into a strategic advantage instead of a point of conflict.

“I think we’re looking for greater cooperation and greater communication: a more integrated relationship between Lincoln and the communities they serve,” he said. “The best result is coming together, working together, knowing our priorities, the kids and their educational process.

“We think our kids can be served best by all of us, the AOS and Lincoln Academy, working closely together, especially on academics. I really think both of us will be stronger and better the closer we work together.”

As part of his opening remarks, Hatch said two concerns raised at AOS 93 Board meetings have been about the spring Eagle Term and the discontinuance of the school’s 1-to-1 laptop program.

“Both were implemented, we feel, without a lot of input from this side,” Hatch said. 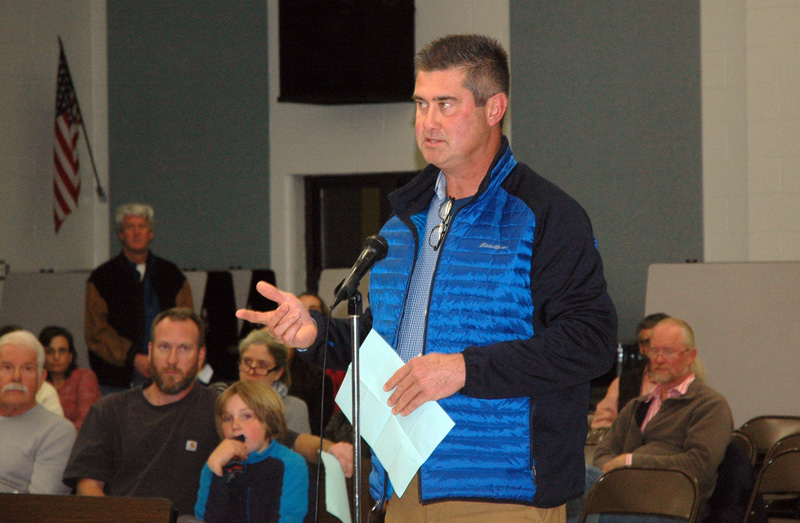 Initial comments from the public were about communication between AOS 93 and LA, as well as where to go with concerns or questions about LA.

Dennis Anderson, of Newcastle, asked about the AOS 93 Board’s access to Lincoln Academy’s financial information. He also asked whether the town of Newcastle pays tuition for the children of LA dorm parents.

Thorpe said the short answer to Anderson’s initial question is that the AOS 93 Board does not have access to detailed information on LA’s finances.

Board member Stephanie Nelson, of Newcastle, responded to Anderson’s second question, saying the town does pay tuition for the children of dorm parents.

“We don’t see anything from Lincoln as far as their budget is concerned. We basically just get bills from Lincoln Academy for the number of students, vocational transport, and special education. All bills come through the AOS office and are processed, but we don’t see the budget,” Nelson said.

Lincoln Academy Board of Trustees President Chrissy Wajer attended the forum and said the board welcomes dialogue with the public.

“It’s our responsibility to hear the concerns of parents and neighbors in the AOS. We graduated from these schools and we are very happy to be here tonight,” Wajer said.

Bill Card, of Bristol, a 1980 graduate of Lincoln Academy, thanked LA’s teachers for their hard work to provide a quality education to the area’s students.

“I want to thank the faculty at Lincoln Academy for the great job they’ve done and continue to do. In forums like this, there is the tendency to lump all people together, and that’s unfair to the teachers and that impacts their morale,” Card said.

Card’s opening remarks received a round of applause from those in attendance.

“I believe Lincoln Academy has a very strong academic program,” Card said in an interview after the forum. “The quality of education is still outstanding, but the actions of the head of school and board of trustees jeopardize that.”

During the forum, Card quoted former NFL head coach Bill Parcells in regards to the nature of Lincoln Academy as a private school largely supported by public resources.

Card said he would like to see more fiscal responsibility from the board and questioned the removal of former Trustee Rob Nelson, of Newcastle, after Nelson aired concerns about the academy’s financial health. 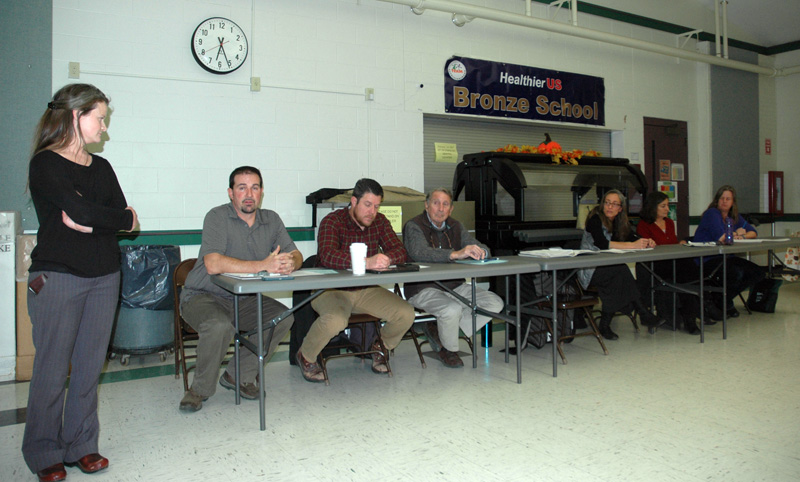 “I understand the need to increase revenue and student body and I welcome that, but the fiscal irresponsibility involved with the development of the boarding program horrifies me to this day,” Card said.

Card said the most important aspect of the ongoing conversation is the students at LA  and how to provide them with the highest quality of education possible.

“I love Lincoln Academy. I’m not here to bash Lincoln. My biggest concern is the impact on the students. The dialogue needs to be constructive and it has to be open and honest,” Card said.

Card urged the LA board to exercise sound fiscal judgment.

Edwin Thelander said he was not in favor of more or less transparency.

“I am a believer in private enterprise and Lincoln Academy is a business. I think the teachers do a good job, a great job,” Thelander said.

At the conclusion of the forum, Hatch said the next step would be to analyze all the data gathered through the forum and survey.

“The more information we have from this, the better we will be able to move forward. This is the start of this process of gathering information,” he said.

LA Head of School David Sturdevant did not attend the forum. “We believe the forum was an important first step,” he said in an email response to a request for comment.

AOS 93 will continue to accept survey responses until Dec. 15. According to Thorpe, the district has received 265 surveys to date.

AOS 93 had 490 secondary education students in the 2016-2017 school year, according to district documents. Eighty-three percent attend LA. AOS 93 towns provided nearly $5.5 million in public funds to LA and spent an additional $331,460 to bus students to LA.

Local towns paid a per-student cost of $11,162.32. The state establishes the figure based on the statewide average of expenditures per public secondary student from the previous year, plus the 6 percent insured value factor for maintenance and renovation projects. The state has not yet set the figure for 2017-2018.

In addition to those costs, Lincoln Academy is asking AOS 93 towns to pay a 10 percent insured value factor, the maximum under state law. The rate was 10 percent until 2009, when the Maine State Legislature cut it to 5 percent.

Lincoln Academy has long said the funds it receives for each student fall short of its cost to educate each student. The school supplements the funds with other revenue, including donations.

AOS 93 interim Superintendent Jim Hodgkin said he believes the request to restore the 10 percent insured value factor “is very reasonable, but the timing is a little ridiculous” due to the issues under discussion at the forum.