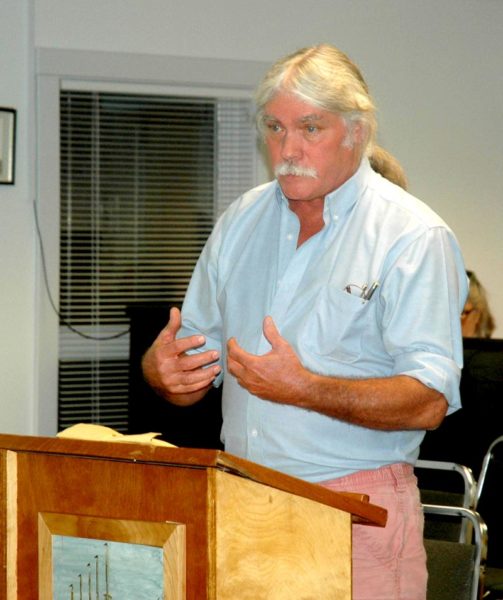 The nonprofit Medomak Valley Community Foundation presented a proposal to rehabilitate the A.D. Gray building and transform it into a community center during a meeting of the Waldoboro Board of Selectmen the evening of Tuesday, Sept. 27.

After a discussion of proposals to rehabilitate and reuse the structure, Selectman Clint Collamore said further discussion on the matter would have to take place in the context of a specific agenda item for a future selectmen’s meeting.

During a conversation on the disposition of the buildings formerly home to the A.D. Gray and Friendship Street schools, Town Manager Linda-Jean Briggs read a letter from Medomak Valley Community Foundation President John Blamey into the record.

The letter was an endorsement from the Medomak Valley Community Foundation board of an effort to rehabilitate and reuse the A.D. Gray School.

Seth Hall, a member of the Medomak Valley Community Foundation, presented a proposal from the foundation, developed over the past several months by the foundation’s board, to the selectmen.

The foundation proposes to rehabilitate and reuse the A.D. Gray building as a Waldoboro Community Center.

The proposal calls for the lease of the A.D. Gray property from the town of Waldoboro to the Medomak Valley Community Foundation for a period of at least three years with the aim of planning and undertaking the redevelopment of the property as a community center to benefit all the town’s residents.

Hall said the foundation is looking, in the next few selectmen’s meetings, to see if this proposal is something the town and the selectmen deem a reasonable endeavor.

“We would like to get going, if we have permission and the engagement of the town,” Hall said.

Hall was not the only member of the foundation in attendance, with Blamey and William Blodgett also present for the selectmen’s meeting.

Multiple selectmen weighed in on the project following Hall’s presentation on behalf of the Medomak Valley Community Foundation.

Selectman Abden Simmons expressed a desire to see a commitment from the foundation to complete the project before entering a three-year lease. He wants to avoid, in the event of the project’s failure, returning to where the town is now, in the position of having to decide what to do with the vacant structure.

“A commitment from you guys would make me feel a lot better about moving forward and doing this project … I’m not comfortable doing a three-year lease without a commitment,” Simmons said.

Hall said a study would have to be conducted by Heliotropic Technologies, of Boothbay Harbor, to make an initial determination of whether the building could be affordably rehabilitated.

“The commitment of the foundation is very strong in all of this and our track record is very good financially,” Hall said.

Selectman Robert Butler suggested a temporary moratorium on any action on the A.D. Gray property could give the foundation time to determine the feasibility of the project.

“If things work for you, it’s available, and if they don’t work, we aren’t stuck with a three-year lease,” Butler said.

Other portions of the community foundation’s proposal include the foundation’s expectations to meet all direct and indirect costs of such a redevelopment effort, with no funding expected or required from the town, though Hall indicated that the foundation would expect the town to support grant applications submitted as part of the redevelopment process.

According to documents provided to the selectmen from Medomak Valley Community Foundation’s board, immediately after the inception of the lease, the foundation would improve and maintain both the tennis courts and the outdoor basketball court on the property for community use during the redevelopment process, and the town would continue to provide municipal utilities, power, and snow removal for the duration of the lease.

Additionally, the foundation’s proposal to the selectmen indicated that, after the completion of the project, the town would assume ongoing operations and maintenance costs of a new, functioning Waldoboro Community Center, though this proposal would likely require a corresponding warrant ariticle.

If the redevelopment effort fails during the lease period, the town would have the option of terminating the lease and regaining control of the property, regardless of any and all improvements made in the interim.

Hall spoke of the previous failed redevelopment of the building through a town partnership with the Central Lincoln County YMCA, but indicated that the Medomak Valley Community Foundation’s track record, specifically the successful completion of the ball fields near Miller School in 2008, demonstrates the foundation’s ability to undertake the project.

The Medomak Valley Community Foundation was founded in 2003 as a 501(c)(3) nonprofit corporation.

According to the foundation’s website, its mission is to encourage and vitalize the sense of community in the Medomak River Valley by enhancing health, social, and recreational opportunities for all children and adults through fundraising and encouraging the development of programs and facilities.

The A.D. Gray building has sat vacant since the middle school closed in 2009, with the exception of the annual use of the structure for a haunted house put on by the Waldoboro Firemen’s Association.

In 2012, the Central Lincoln County YMCA, based in Damariscotta, entered an agreement with the town of Waldoboro to repurpose the building, which is approximately 30,000 square feet and was built in 1935, as a YMCA  facility.

However, the YMCA withdrew from the project in 2015 after a vote from the YMCA’s board to terminate its lease.

In May 2016, Waldoboro held a public forum to discuss potential future uses of the building.