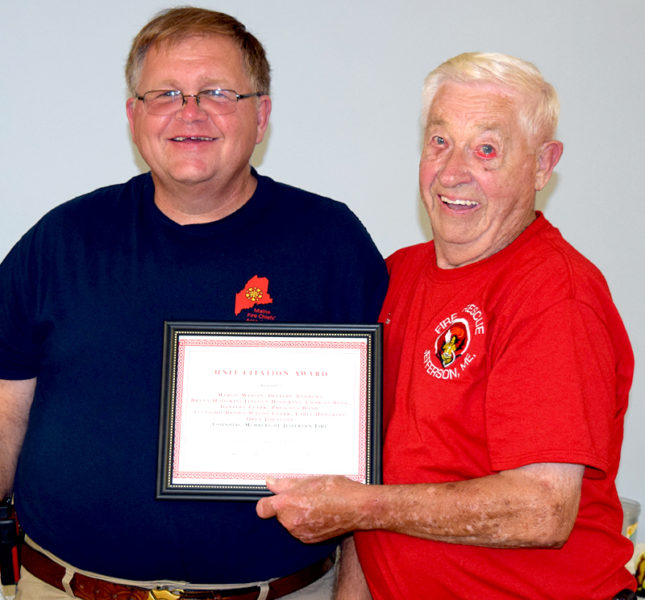 Jefferson firefighter Don Hastings accepted the award on behalf of the founders during the association’s annual lobster bake and awards ceremony at the South Bristol Fire Department on Wednesday, Aug. 17.

“On the evening of Nov. 21, 1941, about 15 men gathered at the Christian Endeavor Hall to form The Jefferson Volunteer Fire Department,” according to the nomination form. The department’s equipment consisted of four pails, six Indian pumps, two hook ladders, and two extension ladders.

The department raised money from donations and a fireman’s ball and the town contributed $100 to purchase more equipment. More than five years after the department’s founding, it bought its first truck, a 1926 Chevrolet, from the Boothbay Fire Department.

Upon receiving state licensing for a first responders unit, The Jefferson Volunteer Fire Department changed its name to Jefferson Fire and Rescue in January 1991.

“We are sure that the founding members of The Jefferson Volunteer Fire Department would be proud of the organization for which they laid the foundation,” the nomination form states. “Today, 29 dedicated volunteer firefighers and emergency medical responders, utilizing seven pieces of apparatus and a rescue boat, remain committed to providing high-quality fire protection and rescue services to Jefferson and our neighboring communities.”

Jefferson Fire and Rescue is working with the Jefferson Historical Society and the town of Jefferson to plan a 75th anniversary celebration for mid-November, according to Jefferson Fire Chief Walter Morris.

The department plans to hold an open house and public supper with a display of memorabilia and photos from 1941 Jefferson.

Hastings, the firefighter who accepted the award on behalf of the founders, is the oldest current member of Jefferson Fire and Rescue, according to Morris. A former fire chief of Spring Valley, N.Y. and county fire coordinator in Rockland County, N.Y., Hastings moved to Jefferson and joined the department in 1991.

Hastings started an ongoing practice of Lincoln County firefighters going to trainings in Rockland County. He has been Jefferson’s safety officer and remains active with the department, responding to daytime calls and doing pump operations.