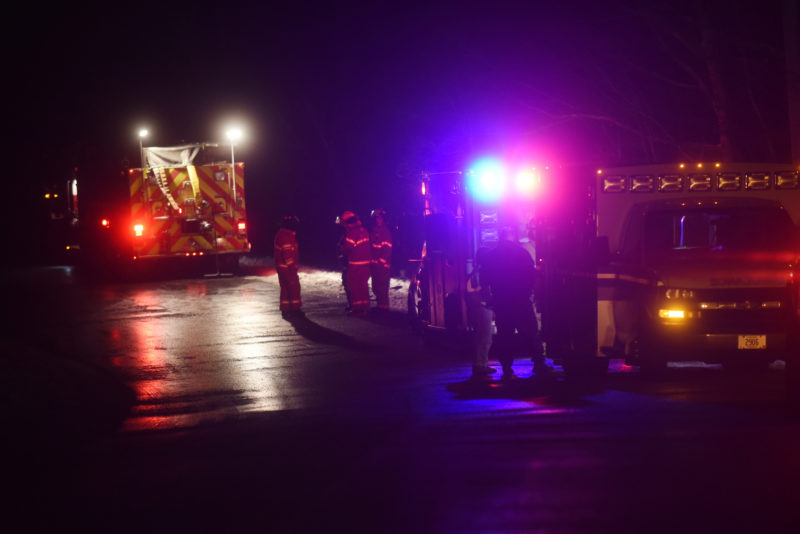 Emergency crews respond to a three-vehicle incident on Lower Round Pond Road in Bristol the morning of Friday, Dec. 21. (Jessica Picard photo)

Four people were brought to the hospital with non-life-threatening injuries after road conditions caused a series of crashes on Lower Round Pond Road the morning of Friday, Dec. 21.

James Doughty, 39, of Wiscasset, was driving a red 2008 Dodge Ram east on Lower Round Pond Road when he was unable to negotiate a bend in the road due to ice and struck a cluster of trees, according to Lincoln County Sheriff’s Office Deputy David Bellows.

Paul Smith, 63, of Bristol, was driving a blue 2015 Hyundai Elantra west and pulled over to help Doughty.

Doughty exited his vehicle and was walking toward the Elantra while speaking with Lincoln County Communications on the phone when a 2016 silver GMC Sierra traveling west was also unable to make the bend in the road. The Sierra was operated by Steve Masters, 57, of Round Pond, and Lisa Masters, 53, was a passenger.

The Sierra struck both Doughty, who was still on the phone, and the Elantra.

Doughty and Smith were transported to LincolnHealth’s Miles Campus by ambulance, and Steve Masters and Lisa Masters were driven to the hospital in another vehicle. The injuries were non-life-threatening, according to LCSO Lt. Brendan Kane.

Everyone involved was wearing a seat belt when in the vehicles, Bellows said.

Lower Round Pond Road was closed to traffic while crews sanded the road and worked on the scene. It was reopened around 7:30 a.m.