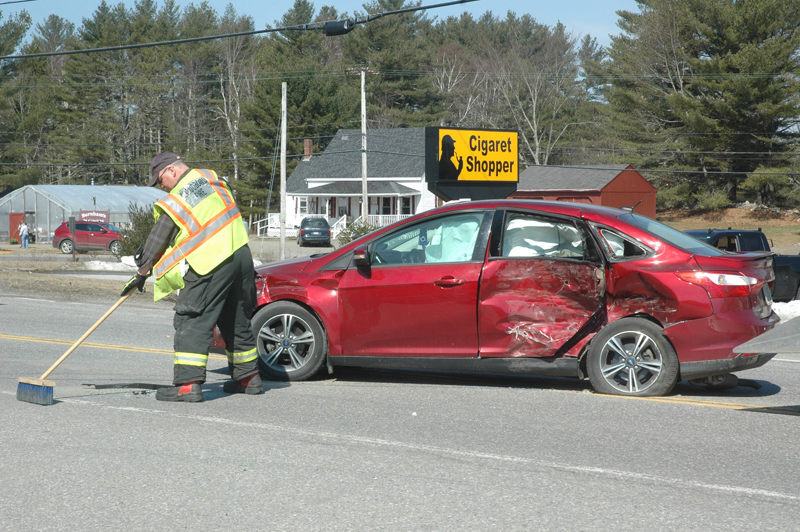 A member of the Waldoboro Fire Department sweeps debris out of the road at the scene of a three-car collision on Route 1 the morning of Monday, April 10. (Alexander Violo photo)

A three-vehicle collision on Route 1 in Waldoboro sent three people to Maine Medical Center and at least one person to a local hospital the morning of Monday, April 10.

Volene Creamer, 65, of Waldoboro, driving a Ford sedan, attempted to pull out of the Moody’s Diner parking lot into the southbound lane of Route 1, according to Officer Jeffery Fuller, of the Waldoboro Police Department. Alexander Rebilas, 22, of Warren, was driving a GMC pickup truck north on Route 1.

Volene Creamer did not yield to oncoming traffic, according to Fuller. Rebilas attempted to avoid a collision by swerving to the right, but struck the Ford sedan on the driver’s side, then hit a parked, unoccupied Toyota sedan in the Moody’s parking lot.

Fuller said three people were in the Ford sedan and two in the GMC pickup at the time of the crash.

Volene and Kerwin Creamer, Verge, and Damren were transported to LincolnHealth’s Miles Campus in Damariscotta.

Damren was treated and released, according to a LincolnHealth spokesperson. The Creamers and Verge were transferred to Maine Medical Center in Portland.

As of Tuesday, April 11, Volene Creamer was in critical condition, while Kerwin Creamer and Woodrow Verge were in satisfactory condition, according to a hospital spokesperson.

Further information about the nature of their injuries was not immediately available.

It was not clear whether Rebilas was hurt or was transported to a hospital.

The accident occurred near the junction of Route 1 and Route 220, and Route 1 was closed to through traffic while emergency crews cleared debris from the scene.