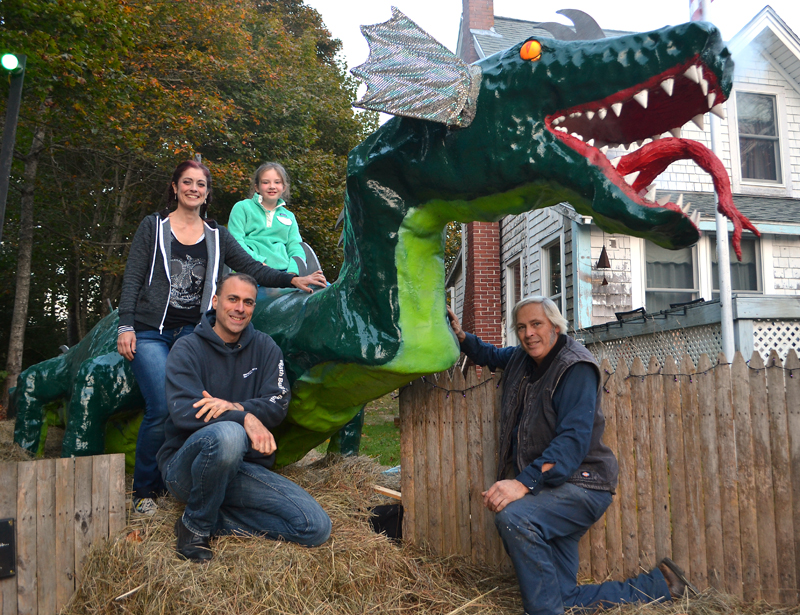 After 17 years of free frights and delights, the creators of Haunted Castle’s Keep, the annual haunted house in New Harbor, have decided to hang up their cloaks.

Since 2000, a custom-made haunted house has appeared on the front lawn at 2634 Bristol Road, the home of artist Michael Morrison and his mother, Etta Morrison. With help from family and friends, Michael Morrison, who works full-time as a delivery driver for Colby & Gale Inc. in Damariscotta, assembles the elaborate attraction for visitors of all ages to enjoy free of charge.

“We grew up with a single mom and she was always able to provide for us on her own, but we couldn’t always do the extra stuff like this,” said April Morrison, Michael Morrison’s sister. “It’s nice to have something you can go and do as a family and have fun without having to worry about there being a cost involved.” 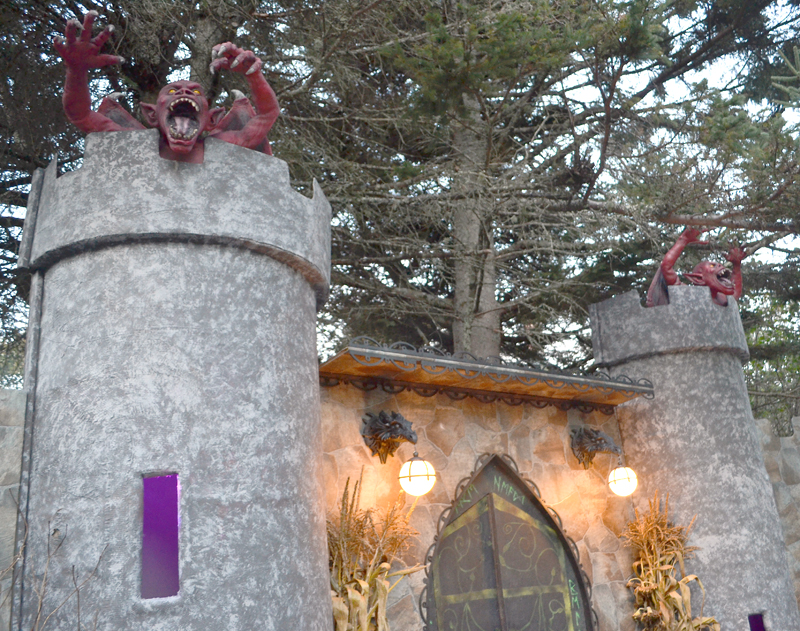 Demons guard the castle at Haunted Castle’s Keep, the free haunted house Michael Morrison and his family have set up every year in New Harbor. (Maia Zewert photo)

For the same reason, the Morrisons have never had vendors at the haunted house, because they didn’t want parents to feel pressured to buy things for their children.

A lifelong Halloween enthusiast, Michael Morrison typically set up some sort of display for the holiday in his front yard. The elaborate haunted house, however, didn’t come about until April Morrison brought up the idea of building a castle.

“April said she wanted a castle and I said, ‘You can’t have a castle without dragons,’” Michael Morrison said.

In 2000, he built the first iteration of what is now the Haunted Castle’s Keep, including a castle and two large dragons named Colby and Gale. Since then, the display and haunted house have continued to grow in both size and creativity. Each year centers around a theme, and the props and costumes amassed over the years are modified to fit the display.

“Which is right about when we’ve recovered from the last Halloween,” said Leon Vanella, nephew of April Morrison and Michael Morrison and “Frightener in Chief” at Haunted Castle’s Keep. 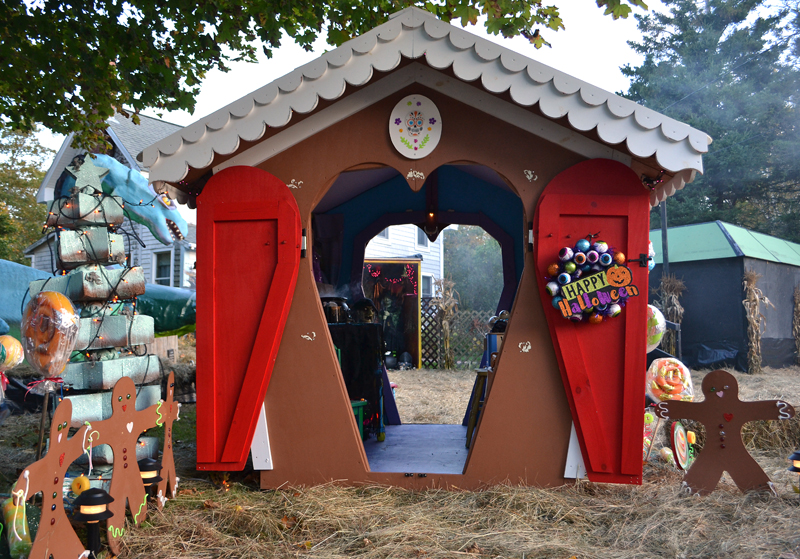 This year’s theme is Dark Rites. April Morrison will be dressed as a high priestess and greet visitors at the haunted house. Vanella’s character, as well as the characters of the other volunteers, is being kept under wraps until the castle opens. Michael Morrison typically forgoes dressing up for the holiday, instead walking around the display taking photos and troubleshooting.

Construction of the Haunted Castle’s Keep usually begins in earnest at the start of September and continues throughout October, until the haunted house opens to the public. Decorations take about “six to 10 hours” a day in the month leading up to the event, according to April Morrison.

April Morrison owns and operates SugarSpell Sweets, but with the exception of the Damariscotta Pumpkinfest, she took the month of October off to work on the haunted house. Michael Morrison works on nights and weekends, around his schedule at Colby & Gale.

In addition to the work of the Morrison family, other volunteers, including father and daughter Steve Earle and Stephanie Earle, assist with the scaring once the haunted house opens to the public. For the past several years, Nicole Waller has designed artwork for Haunted Castle Keep’s promotional materials based on the annual theme.

A young collaborator joined the team this year. Sophie Yates-Paul, 9, who lives next door to the elaborate display, suggested adding an area for young children and adults who do not wish to go through the haunted house.

“I’m too chicken to go through (the haunted house) and there are probably kids like me who are too scared too,” Sophie said. 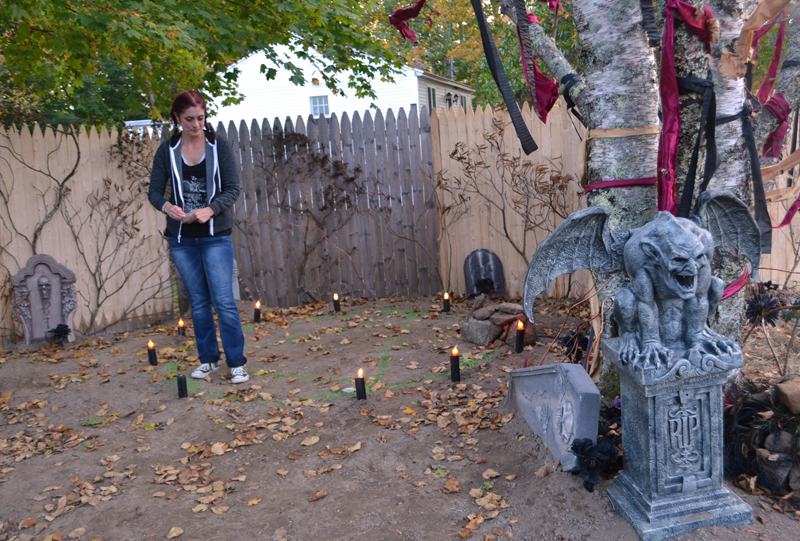 April Morrison replaces a lightbulb during a test run for the Haunted Castle’s Keep in New Harbor on Sunday, Oct. 22. (Maia Zewert photo)

Her suggestion was to repurpose the gingerbread house, which had been part of SugarSpell Sweets’ float for Olde Bristol Days, into a smaller, less scary haunted house for the younger children. Sophie even donated the use of her play kitchen for the Halloween setup.

The Haunted Castle’s Keep is open for a few nights surrounding Halloween. This year, with the holiday falling on a Tuesday, the haunted house will be open from Friday through Sunday, close on Monday, and reopen for Halloween night.

Depending on the weather, the Haunted Castle’s Keep receives around 250-300 visitors a season, Michael Morrison said. On one occasion, the haunted house closed due to snow.

The decision to make this the final year of the Haunted Castle’s Keep came about due to a number of factors, including dwindling volunteer numbers and the amount of work that goes into the event, according to Michael Morrison.

While the haunted house will not make a reappearance next year, the Morrisons will likely have some sort of Halloween display in the front yard.