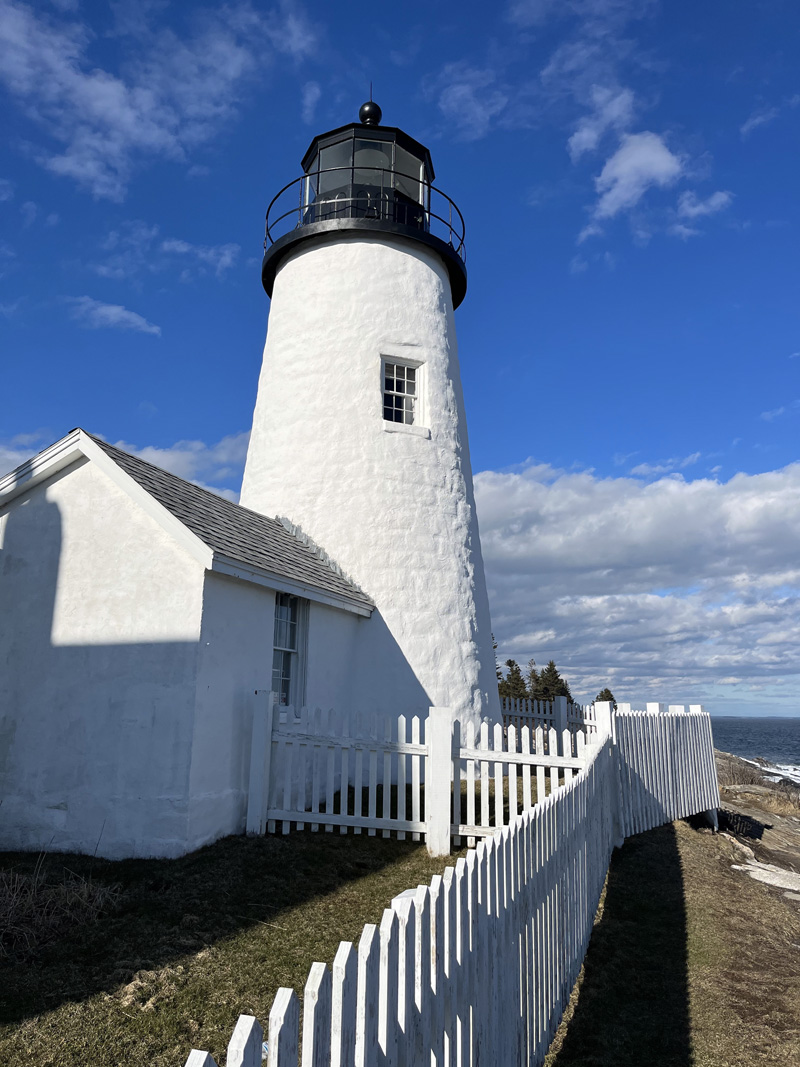 The Pemaquid Point Lighthouse, originally built in 1827 and reconstructed in 1835, is owned by the U.S. Coast Guard and leased to the American Lighthouse Foundation. (Anna M. Drzewiecki photo)

“You’re going to want to use both hands,” said Caren Clark from the small room at the base of the Pemaquid Point Lighthouse tower, her breath visible in the stone structure despite spring sun outside. Her hands were gloved. The metal banisters spiraling up the staircase were glacial. They require repainting almost yearly. As many as 35,000 sets of hands per year, gripping on for balance.

The tower was originally built in 1827, then reconstructed with granite in 1835. Almost 200 years of ascending and descending feet on these stairs, first to keep the light, later to admire it.

Clark, like other docents, is a volunteer with the Friends of Pemaquid Point Lighthouse. Once a robust volunteer force, after two years closed or at reduced visiting capacity due to the pandemic, the organization is now concerned for the upcoming summer season – and in need of help.

“This year may be like last year, where we’re only open at a limited capacity,” said founding member and President of the Friends of Pemaquid Point Lighthouse Marty Welt. “Unless we can recruit more volunteers.”

The Friends of Pemaquid Point Lighthouse, working under the Owls Head-based American Lighthouse Foundation, is a volunteer-run, donation-based nonprofit that maintains the Pemaquid tower and guides tours free of charge during the season when the town-owned park, where the lighthouse is situated, is open.

Volunteer requirements are generous. “I try to make it so anyone would qualify to be a docent,” said Welt. He has not yet rejected a volunteer. There’s nothing to memorize, plenty of prompts for presentations at the tower’s base, and no stipulation that volunteers must be able to climb the tower.

Plus, Welt said something usually sparks a docent’s interest, spurring them to research on their own. The group learns collectively this way.

The season runs Memorial Day through Columbus Day. In June, the organization treats volunteers to a lobster dinner.

“If we don’t have enough volunteers, we can’t be open seven days a week,” said Clark, adding that the summer season depends entirely on how many people there are to staff the tower.

An experienced docent and treasurer of the FPPL until 2020, Clark is responsible for training new volunteers.

At the base of the tower, said Clark, everyone takes a photo looking up. She pointed out where an old eastern-facing window was once cut out of the stone then covered up, the bricks laid neatly to form interior walls. Her passion lies in docent work, guiding visitors through the vertical chamber to the Fresnel lens in its glass-windowed nest.

“I like telling stories,” she said, a quick note in a long list of folkloric lighthouse tales she rattles off easily.

Clark gave a short safety talk, emphasizing to hold onto the railings. Ascending the tower, two windows, set into the thick granite, let blue light cast off the ocean into the structure.

The tower hasn’t always been open to visitors.

“If you think back to before 2000, most lighthouses that were owned by the U.S. government were locked,” said Welt, “That was the case with Pemaquid, as well.”

In the early 2000s, a group initiated by late Bristol Mills resident Richard Melville gathered to form the Friends of Pemaquid Point Lighthouse, a chapter of the American Lighthouse Foundation.

The Coast Guard still owns the tower itself, while the town of Bristol owns and operates the surrounding park. Under a 20-year lease from the Coast Guard to the American Lighthouse Foundation, since then, the tower has been maintained and opened to visitors, thanks to volunteers.

“From a docent’s point of view,” said Welt, “You meet people from all around the world, and most people are pleasant to deal with. Many of them have never gotten the chance to climb a lighthouse in their life.”

“We just want to give (visitors) an exciting experience,” said Welt, noting that docents are not required to regale visitors with stories of storms and shipwrecks and shipwrecks-avoided and the tower’s near collapse and then its restoration. Though it is highly encouraged.

With requests to remain open longer hours, Welt went on a recruiting campaign.

“You name it, I found people,” he said. He went to friends, to the library, the grocery store, the transfer station. FPPL jumped from around 10 to around 40 volunteers, which allowed them to remain open to visitors for longer hours without exhausting volunteer labor.

Clark paused before ascending the last, steepest steps in the staircase, which spirals like the inside of a shell. This is where she instructs visitors to be patient, making sure they ascend and descend one by one, so no one gets their fingers stepped on.

At the top of the tower, the Fresnel lens, like a gem cut for a giant, looms bright and refractive in the sun. Windows encircle the lens, allowing light in from all angles. But, as Clark explained, the lens was custom built not to throw light backwards, onto the mainland of the peninsula. She talked about its history, the mines in France where the sand for the glass originated. The lens is original. It takes almost an hour to clean. A scratch would be – unimaginable.

Clark reached for a nautical chart tucked against the wall. Looking out the window, she named the other lighthouses visible from the tower. Monhegan Lighthouse, the Seguin Island Light Station obscured by glistening white light on the horizon. She pointed on the chart to others.

Returning the map, Clark showed how the ventilation system would have worked, when the tower still burned oil. Now, the vents allow airflow to visitors on sweltering summer days.

The Coast Guard still keeps the light, meaning they are responsible for the tower’s functionality. In 2020, said Clark, the Coast Guard replaced the halogen bulbs, of which there were two installed, one a back-up with a new mechanism. She has yet to learn how the new system works.

Perhaps because the tower was closed that year. No docents’ voices echo through its chamber, just the sounds of wind and insects taking shelter.

“COVID comes along, and after all, almost all the volunteers are retired and have been doing this for a while,” said Welt. Momentum slowed for the organization, which depends entirely on visitor donations.

Before 2021, the park would see about 70,000 visitors, around half of whom would climb the tower. As treasurer, Clark started keeping data. The volunteers decided to aim for a donation average of about one dollar per visitor. Which worked well until 2021, when the donation total dropped down to around $9,000. They used these funds to repaint the tower.

“It looks like an orange candle has dripped down the side of the lighthouse,” said Welt of the rust from the metal catwalk that, over time, stains the white paint below. Repainting is therefore part of routine maintenance – still, it doesn’t come cheap. Nothing on the tower does, as all parts are custom and the construction historical. A 2007 restoration project cost $106,000. It was funded through donations and grants, and saved the tower from potential collapse.

Clark descended first, with a firm warning to wait. Back in the small room at the tower’s base, items and images posted to the wall carried new meaning.

One of the halogen bulbs sat in service to education now. A blown-up image of the 2003 Maine quarter – bearing the Pemaquid Point Lighthouse – stood out amidst the photographs and plaques. Postcards, keychains, and other trinkets waited patiently for summer eyes.

Clark explained that in her view, they’re not so much “for sale” as tokens of appreciation when someone offers a donation. They’re small, a trace, a remembrance, something to put in one’s pocket or on a dashboard.

This is where Clark, like other docents, would thank visitors, answer questions, encourage a donation, and wish them well in Maine.

To safely open the tower to visitors in 2021, considering pandemic precautions, the Friends of Pemaquid Point Lighthouse devised a system to be a docent outdoors and let small groups enter the tower on their own, circulating through. Still, only about one third of the volunteers, due to safety concerns, were willing to do that.

Welt plans to reach out to previous volunteers over the next few weeks to gauge the size of the crew before scheduling or announcing open hours. Now, he pointed out, it has been two years since some volunteers have been docents at the tower.

“I don’t know yet what will happen this year,” said Welt. “I can only do what I can do.”