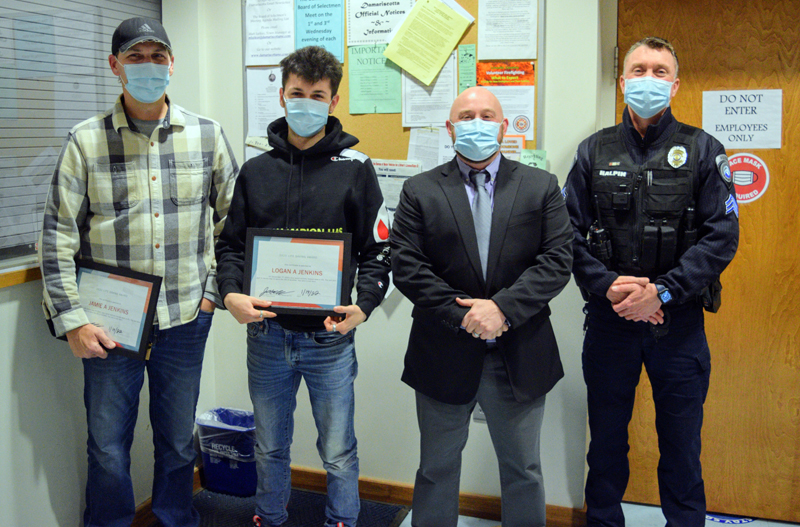 From left: Father and son Jamie and Logan Jenkins were presented with the 2021 Life Saving Award by Damariscotta Police Chief Jason Warlick and Sgt. Erick Halpin at the Board of Selectmen’s meeting on Jan. 19 for their efforts to rescue an injured man trapped in his vehicle following a crash on Dec. 7. (Nate Poole photo)

Damariscotta Police Chief Jason Warlick presented two Friendship men with the 2021 Life Saving Award for their heroic response to a fatal crash on Dec. 7, at a Damariscotta Board of Selectmen’s meeting on Jan. 19.

On Dec. 7, 37-year-old Derick Lavigne, of Buxton, was traveling north on Route 1 in Damariscotta in an Isuzu box truck when a 2013 Blue Ford Explorer operated by a 25-year-old Belfast woman traveling south collided with his vehicle.

The collision resulted in the woman’s death.

Lavigne was injured in the crash, suffering substantial external and internal bleeding. Due to his declining physical condition and the damage to the vehicle, he could not free himself from the truck by himself.

Before any emergency crews arrived, Jamie and Logan Jenkins, a father and son from Friendship, pulled over at the scene and jumped into action.

They used a fire extinguisher to put out the fire and used debris from the scene to break the burning truck’s windshield and drag Lavigne into their own vehicle. They assisted further by slowing Lavigne’s blood loss and keeping him calm until emergency medical services could arrive.

Lavigne was transported to LincolnHealth Miles Campus before being transported to Maine Medical Center in Portland, and ultimately survived the ordeal.

“Some might say that public servants, such as police, fire, and EMS are the heroes. To them I would humbly say, ‘thank you, but we are just doing the job you all pay us to do.’ On Dec. 7, the heroes that helped save Derick’s life… are standing in front of us tonight,” Warlick said.

The board of selectmen and those in attendance applauded the two men for their actions.