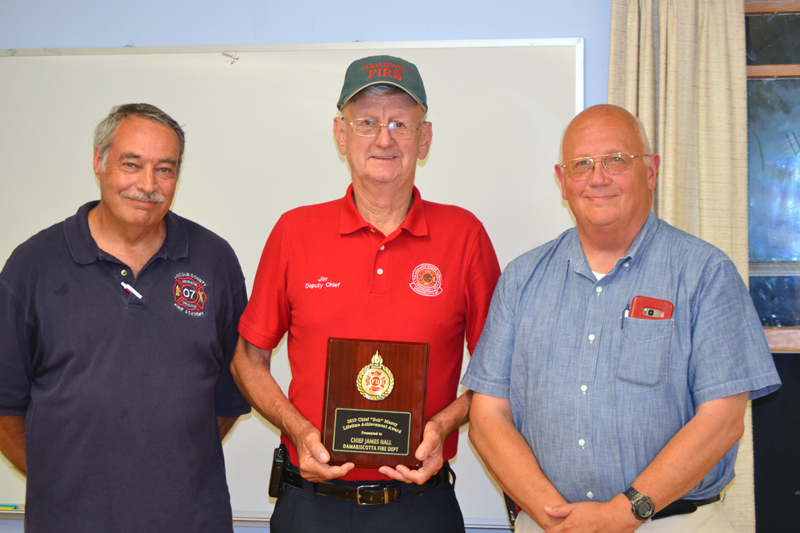 From a 57-year veteran to one of the county’s newest firefighters, the Lincoln County Fire Chiefs Association recognized excellence in the fire service Aug. 21.

The association presented the Chief Bob Maxcy Lifetime Achievement Award to Deputy Chief James Hall, of Damariscotta; the Officer of the Year Award to Lt. Allen Spinney, of Bristol; the Firefighter of the Year Award to Rose Adkins, of Bremen; the President’s Award to Capt. David Pratt, of Boothbay; the Unit Citation Award to the Damariscotta Fire Department Rescue-Pumper Truck Committee; the Community Merit Award to Dr. Kristin Kentopp; and a special Past President’s Award to Chief Walter Morris, of Jefferson. 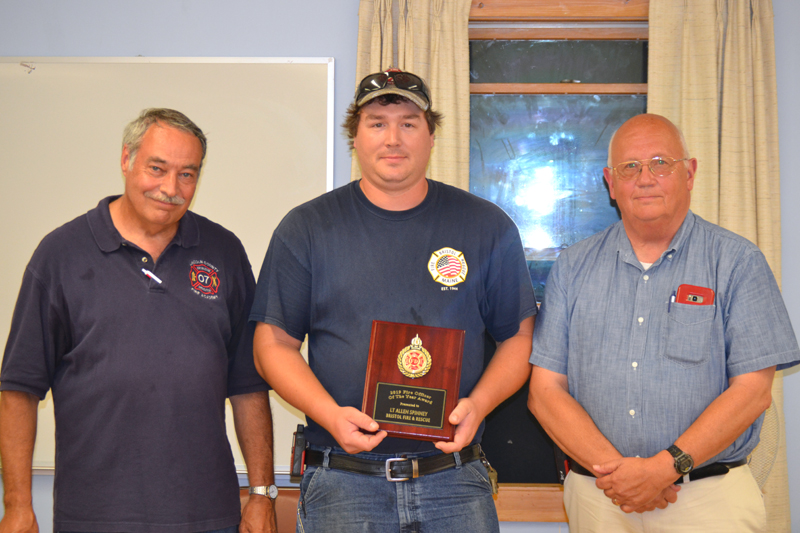 James Hall, the recipient of the Chief Bob Maxcy Lifetime Achievement Award, joined The Massasoit Engine Co., of Damariscotta, in 1962.

In addition to going to calls, Hall “performs many duties that help keep the department working smoothly,” according to his nomination. “This list includes picking up equipment, driving trucks around, bringing equipment to community events, assisting with pump and hose testing, and happily carrying out any task that is necessary.

“There is no firefighter alive today (who) has had a larger impact on The Massasoit Engine Co. than Chief Jim Hall. He always stands ready to answer the call for service and lend a hand to any and all in need.” 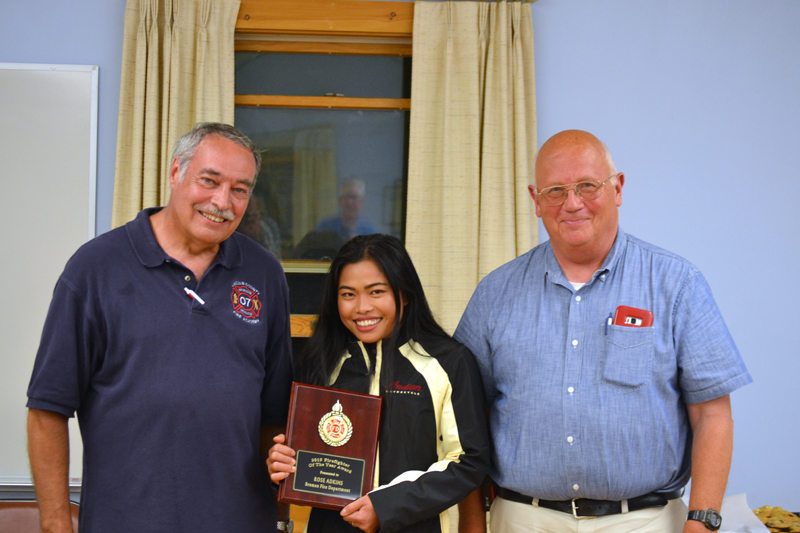 Spinney is one of the lead instructors at the Lincoln County Fire Academy and has “a teaching style that holds the attention of the students even when the material is dry,” according to his nomination. 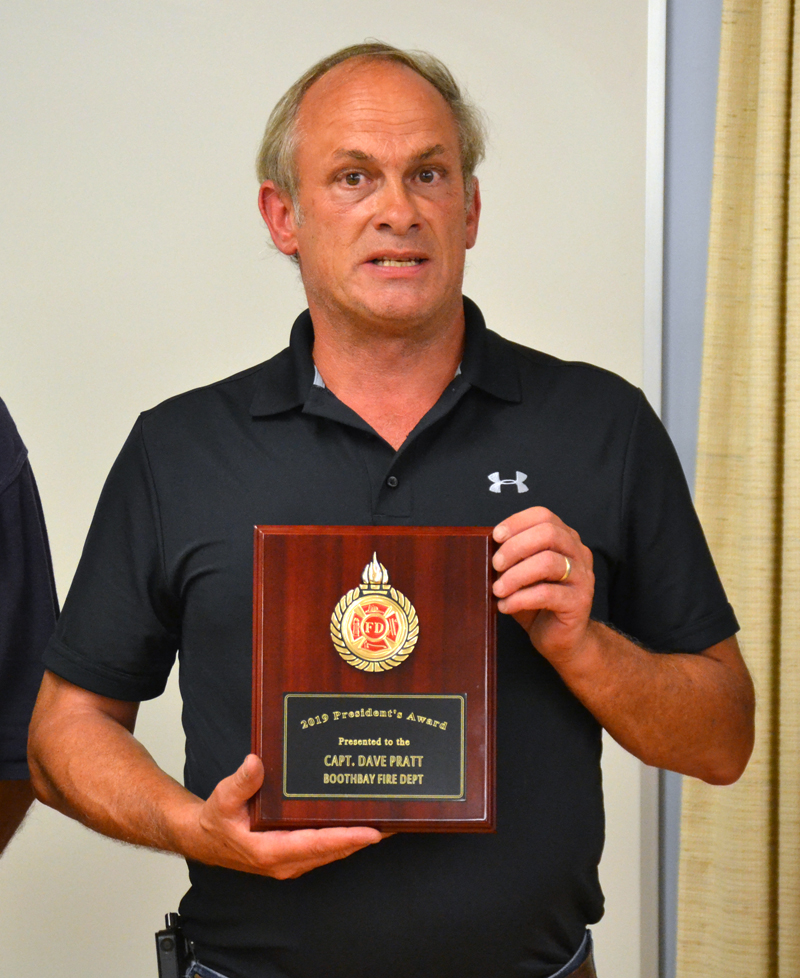 He responds eagerly to all calls for the Lincoln County Firefighter Strike Team, which provides support for major fires across the county.

He takes advantage of any training available to advance his leadership and operations skills and trains other members of the Bristol department on truck and boat operations, among other things.

During Bristol’s recent string of structure fires – four since the beginning of July – Spinney’s ability to quickly and properly “begin a defensive attack before more members arrive has greatly improved our changes for a successful knockdown,” the nomination says.

The recipient of the Firefighter of the Year Award, Rose Adkins, joined the Bremen Fire Department 2 1/2 years ago and recently graduated from the Lincoln County Fire Academy’s Basic Fire School.

“She has eagerly accepted all tasks asked of her and completes them as soon as possible,” the nomination says. “She performs all duties with a positive attitude and is self-motivated, not one to sit around and wait to be told to do her job. Her fire chief wishes he had 10 more like her.”

Capt. David Pratt, of the Boothbay Fire Department, recipient of the President’s Award, was a founding member of the county fire academy and its operations chief from 2007-2019. He resigned in June.

Pratt and other instructors have trained 400 firefighters since the establishment of the academy in 2006. Pratt received the Maine Fire Instructor of the Year Award from the Maine Fire Service Institute in 2014.

His drive to work with local fire chiefs to start the academy “stemmed from the need for more accessible training in a faster time frame,” according to a July feature in The Lincoln County News. Before the academy, firefighters had to piece together classes across the state in order to earn their certification.

Pratt likes to tell recruits it took him 18 months to get his certification, while they can get it in as little as six months.

The Damariscotta Fire Department Rescue-Pumper Truck Committee received the Unit Citation Award for its work to replace two of the department’s trucks with one multifunctional apparatus.

The committee’s “countless hours” of work “provided a tremendous level of value to the company, town, and surrounding community,” the nomination says. “The consolidation of two trucks into one made this task more challenging and difficult to accomplish,” but the committee achieved its goal when the new Damariscotta Engine 2 arrived in February. 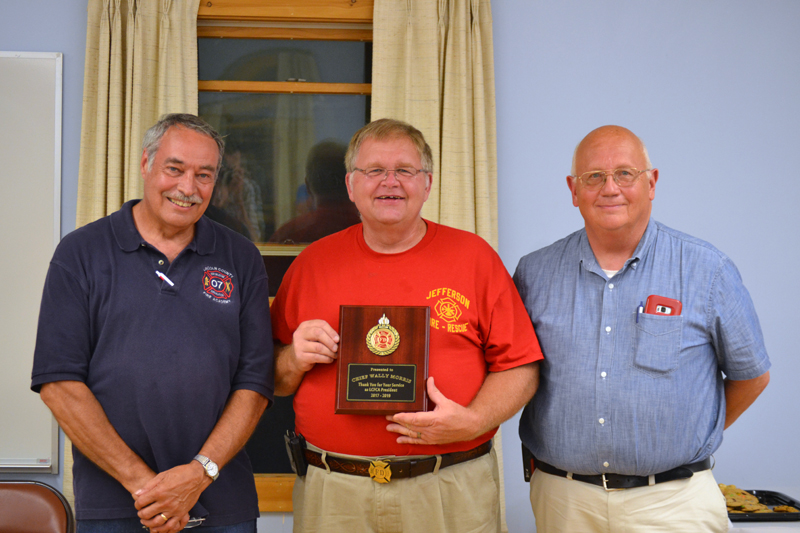 Dr. Kristin Kentopp received the Community Merit Award, for an individual or business that furthers public safety through its work with emergency services.

Kentopp is a physician at Togus, the U.S. Department of Veterans Affairs hospital in Augusta. She previously practiced at Lincoln Medical Partners in Damariscotta.

She has donated her time to review medical evaluations for local firefighters and first responders for more than 10 years, according to her nomination. She visits fire stations to interview each member and determine whether they are physically fit for certain duties.

“She provides a great community service and her departments appreciate the time she gives, especially with her very busy work schedule,” the nomination reads.

Walter “Wally” Morris, recipient of the Past President’s Award, was president of the association from 2017-2019.

During his term, Morris was active with the fire academy and with efforts to resolve dispatching issues.

Morris’ successor, President Roger Whitney, presented the award to Morris “for his steadfast leadership during his term of office.”