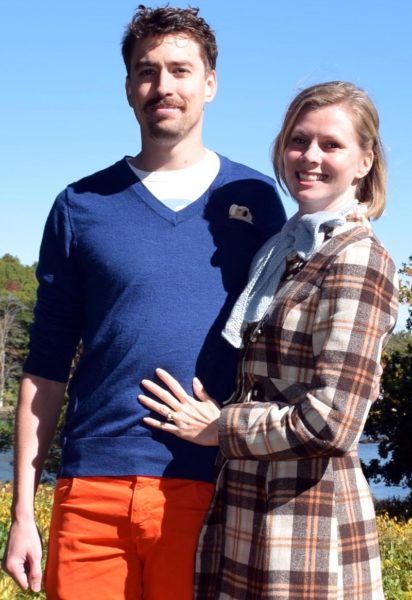 Timothy Buckland-Kerr and Amy Carland, of Sydney, Australia, at Oak Gables Bed & Breakfast in Damariscotta on Monday, Oct. 10. The couple was in town for the Damariscotta Pumpkinfest, where they were volunteers as well as spectators. (J.W. Oliver photo)

As a quick survey of license plates in downtown Damariscotta on Columbus Day weekend will show, the Damariscotta Pumpkinfest draws tourists to the area from across the state, the Northeast, and beyond. But if anyone still doubts what festival co-founder Buzz Pinkham often calls “the power of the pumpkin,” this year’s crowd also included a couple who traveled more than 10,000 miles – from Australia.

Timothy Buckland-Kerr and Amy Carland, a firefighter and project manager who live in Sydney, were planning a vacation in the U.S. when Carland found the website for the Damariscotta Pumpkinfest.

“We have to go to this,” she remembers telling Buckland-Kerr.

Australia doesn’t have pumpkin festivals, according to Carland.

“We don’t celebrate Halloween in the same way in Australia, so we don’t have this sort of thing, with all the pumpkins and the carving and the decorating, so this is really special for us,” she said.

The couple arrived in the U.S. on Sept. 18 and traveled around New England and Canada before going back south to Damariscotta for what Buckland-Kerr called “the penultimate stop” of their vacation.

As of Monday, Oct. 10, they had enjoyed the Giant Pumpkin Parade, the pumpkin pie-eating contest, and the Regatta, and were looking forward to the pumpkin drop.

But their favorite part of the festival was helping out.

Back in Australia, Carland had filled out a volunteer sign-up form on the Damariscotta Pumpkinfest website. The coordinator of the pumpkin dessert contest contacted the couple to help judge the competition – they sampled 17 pumpkin desserts – and sell the desserts afterward.

Buckland-Kerr and Carland agreed that their experience as volunteers was the highlight of the festival.

“We really got to know some people and chat, and people were really, really friendly, and that meant that afterward, when we were watching the parade, we had friends around us,” Carland said.

The couple will leave Friday, Oct. 14, but they plan to recommend the Pumpkinfest – and their lodging at Oak Gables, Martha Scudder’s bed-and-breakfast on the Damariscotta River – to their family and friends back home in Australia.

“I’ll be telling people to come specifically for this and anybody I know who’s going to be in the States at this time, I’ll be telling them to make an effort to come to Martha’s B&B and to absolutely make it to the Pumpkinfest, ’cause it’s been fantastic,” Buckland-Kerr said.