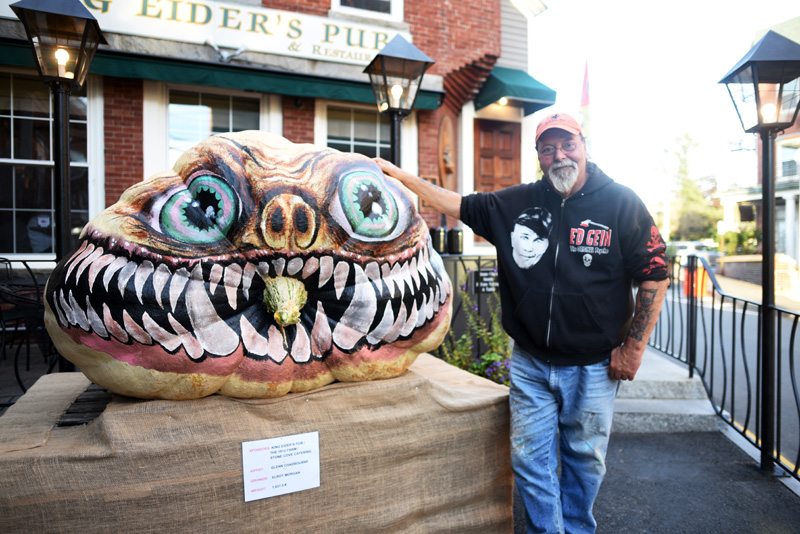 Newcastle artist Glenn Chadbourne stands next to his pumpkin monster in front of King Eider’s Pub in Damariscotta in October 2018. (LCN file photo)

This November, a signed piece donated by Newcastle’s Glenn Chadbourne will go up for auction as part of the Bath Area Family YMCA’s Forever Grateful online auction event.

The auction will run from Nov. 1-12, and Bath Area YMCA supporters will have the opportunity to bid on “fun and one-of-a-kind items,” according to the organization’s website.

Funds raised through the auction will support programs that make the Y available to all, regardless of income, like swim lessons, the mobile Veggie Van meal service, and childcare for busy families.

Described as “inimitable and fiendishly talented” by Stephen King, Chadbourne has illustrated countless stories, many of them King’s, over the years. He began working with the superstar novelist in 2005.

Chadbourne has also served as The Lincoln County News’ editorial cartoonist for more than 30 years. 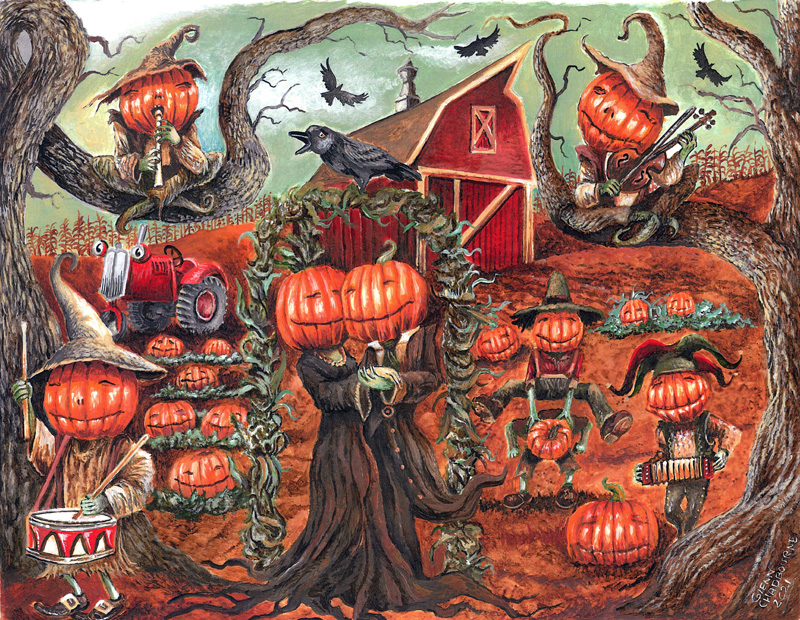 This print by Newcastle artist Glenn Chadbourne will soon go up for auction as part of the Bath Area Family YMCA’s Forever Grateful online auction event.

Much of Chadbourne’s art has a bit of a gruesome edge, something that has served him well in illustrating for the “King” of horror. However, the artist describes the auction piece as a “whimsical pumpkin jamboree,” that shows off his “softer, fuzzier side.”

The piece was somewhat inspired by Damariscotta’s Pumpkinfest, for which Chadbourne has been known to decorate a giant, man-eating pumpkin in front of King Eider’s Pub.

Wanting to use his art to “pay it forward” during a difficult time for many people across the county and the country, Chadbourne reached out to his friend Charlie Ault, director of the Bath Y’s Landing site, and asked him to figure out a way to leverage his artwork to raise some funds for the Y’s programs.

Chadbourne also printed a number of 11-by-14-inch copies of the piece and signed them to be sold at Mike’s Place off of Route 1 in Newcastle for $10 apiece.

After he sells his prints, he plans to “gag up a few clams” for charity himself, according to his Facebook page.

While this is Chadbourne’s first time donating a print for a charity auction, it will not be his last, as he plans to continue to donate original, signed pieces to nonprofits.

To bid on the piece and other items, or to make a donation, go to bathymca.org/auction.