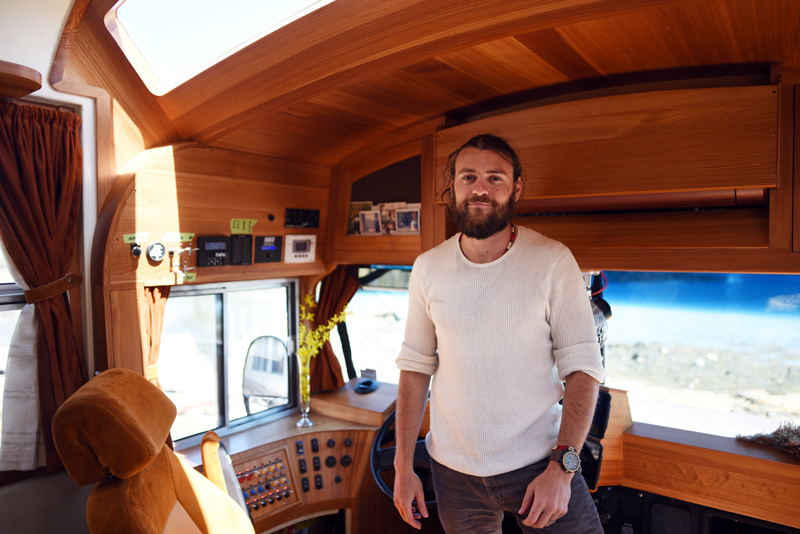 Jeff Osborne stands in the cockpit of his school bus-turned-recreational vehicle Tuesday, May 8. (Jessica Picard photo)

South Bristol’s Gamage Shipyard has been working for the past two years to transform an International 3800 Bluebird school bus into a recreational vehicle, office, and wedding dress showroom.

The bus is owned and the project was designed by real-estate developer Jeff Osborne, who bought the bus in Denver in August 2015.

“This will be my mobile office, home, kind of everything,” Osborne said.

“We’ve never done a bus before,” Kevin Roux, the project’s manager, said of the shipyard.

Osborne said he chose to have the work done by a shipyard due to the need for a durable vehicle that could be self-sustaining and able to be in the middle of nowhere.

“Really only boats are built that way,” Osborne said.

“The bus was something which, at first, we were skeptical of taking on. That said, once we looked at it and what Jeff was asking for, we realized that it was exactly what we do, simply in a bus instead of a boat,” Gamage Shipyard General Manager Mike Tatro said.

The bus came to the shipyard covered in artwork, as the Osbornes took a three-week cross-country art tour after purchasing the bus. They took the seats out and let people paint the bus wherever they stopped.

In the past two years, the shipyard has raised the roof 18 inches and installed 10 solar panels, a hobbit stove, insulation, in-floor heat, cameras that can be operated by two iPads, and vista windows.

“I chose to have a lot of natural light … I wanted it to feel indoor-outdoor,” Osborne said.

The bus also features a small retractable deck, and a back platform to hold Osborne’s Suzuki DR650 motorcycle.

“The biggest thing, in terms of the build, is its focus on being off-grid,” Osborne said.

The solar panels produce enough power to heat and cool the bus without generators, he said.

“The biggest challenge was one of space,” Tatro said. “With a boat you have the space below the sole (floor), which is called the bilge. This is where we normally put a majority of the systems involved with a boat, such as fuel, black and gray water, tankage, and batteries. With the bus, the only thing beneath the floor was open air and the road, so quite a bit of creativity went into finding places to put all the hidden systems,” Tatro said.

Osborne, who lives in Brooklyn, N.Y., said he chose a school bus for his project to due to the ruggedness of the vehicle.

“They’re built for picking up kids in any condition, almost … School buses are up higher, they have bigger tires, they’re made for dirt roads. The all-around general bones of a school bus are more rugged,” he said.

Thomaston Custom Coatings did much of the body work, along with the interior “cob” finish. Mid-Coast Diesel in Warren also worked on the bus, performing a full rear axle and suspension replacement.

Osborne designed most of the bus himself, including the custom kitchen cabinets made from reclaimed long leaf yellow pine.

“I’m just inspired by a more natural design,” Osborne said. He based much of the design on “cob houses,” which are made using lumps of earth mixed with sand, straw, and water.

“I did a cross-country motorcycle trip a couple of years ago with one of my best friends … we were camping a lot outdoors. On that trip, I just thought, ‘Hey, I want to do this more often, and spend more time outdoors,’” Osborne said.

“I tried to figure out how I could incorporate my wife’s business so she could come with me,” Osborne said.

His wife, Britt Castanos-Osborne, is a designer of bohemian wedding dresses. The bus will have a mobile showroom for her company, Daughters of Simone, which she owns with her sister.

The living area is designed to fit nine or 10 people, and the space can be used for friends and family of a bride trying on dresses.

The bedroom in the back of the bus will function as a dressing room, with a Murphy bed that lifts into the wall, revealing a rack to hang the long dresses on.

Along with being a showroom, the bus will be the couple’s home, for “traveling and seeing the country before we settle down,” Osborne said.

The bus was featured on the cable television show “Bus Life Ever” in July 2017.

As for the shipyard, working on the bus has opened new opportunities.

“We are now working with a Portland-based company, converting small storage containers into different types of uses, from mobile workstations to event kiosks (or) sales booths. We are doing one for a mobile trade show booth and another for a mobile coffee shop,” Tatro said.

“These came our way as a direct result of our work on the bus,” he said.