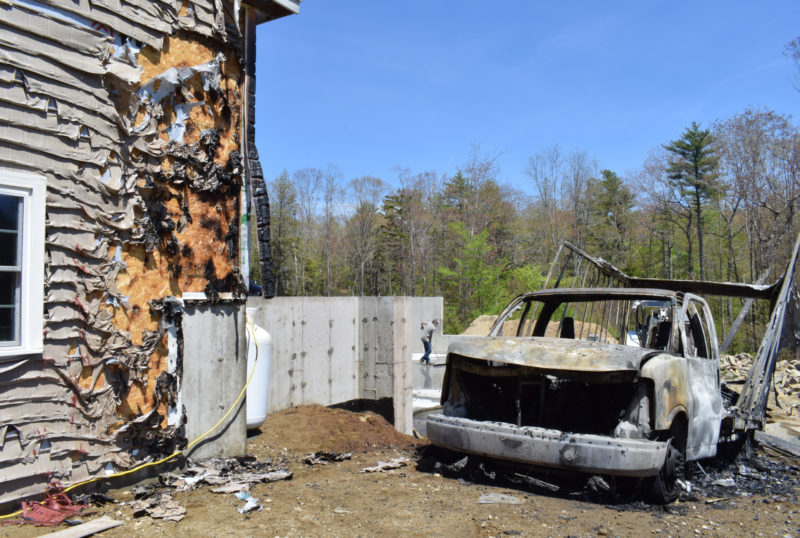 A fire started in the bed of a pickup truck and spread to the back of a garage at 95 Sodom Road in Bristol on Friday, May 22. Firefighters extinguished the flames quickly, saving the building. (Evan Houk photo)

A vehicle fire that spread to the back of a garage at 95 Sodom Road in Bristol was extinguished quickly the afternoon of Friday, May 22.

According to Bristol Fire Chief Paul Leeman Jr., if the fire department had arrived only 10 minutes later, the entire rear of the garage would have been in flames.

“Timing was everything with this one,” Leeman said.

The Bristol Fire Department was dispatched to the scene shortly after noon. Leeman said firefighters arrived about 12-15 minutes later and had the fire out in about five minutes.

The truck was destroyed by the fire. Some siding on the back corner of the garage was melted and some of the wood was charred, but the building was largely saved.

Dave Dostie, 70, of Warren, ran about a mile down Sodom Road until he found a house where he could use a phone to call 911 and report the fire.

Dostie, who works for Maine-ly Concrete Corp., of Warren, was cutting grooves into a concrete foundation on the property. Dostie said he was using a generator in the bed of his pickup truck to power the saw he was using.

The generator caught the back of the truck on fire. Dostie attempted to drive the truck away from the building, but had to get out because smoke was filling the cab.

Leeman said Dostie made the right call by exiting the vehicle.

Dostie, who did not have a cellphone, then ran down Sodom Road to alert the fire department.

According to Bristol tax records, Carol Ann Prentice owns the property at 95 Sodom Road. A sign on another building identifies the property as Akinbac Farm.