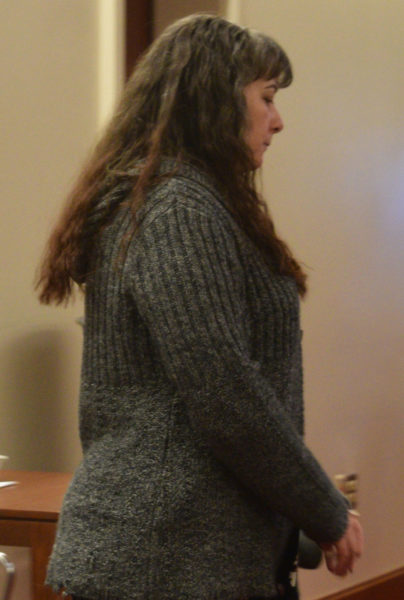 Shawna Gatto, 44, of Wiscasset, enters the courtroom for the second day of her bench trial at the Capital Judicial Center in Augusta on Tuesday, April 2. Gatto is charged with depraved indifference murder in connection with the death of Kendall Chick, 4. (Jessica Clifford photo)

While two medical experts disagree on the timing of a fatal abdominal injury to a 4-year-old Wiscasset girl, they agree she was a victim of child abuse.

Gatto faces a charge of depraved indifference murder in connection with the death of her fiance’s granddaughter, Kendall Chick. Gatto was the girl’s primary caregiver.

Chick died of a blunt-force injury to the abdomen that caused “lacerations of her pancreas” and other internal injuries, according to a report by Maine State Police Detective Jonathan Heimbach, which cites Flomenbaum’s findings.

Flomenbaum performs autopsies to “render an opinion on cause of death and manner of death,” he said.

He found that Chick suffered from “child abuse syndrome” with one “catastrophic” event in addition to chronic abuse.

The prosecution displayed photos of Chick’s body, as well as her internal organs and microscopic close-ups of organs, on a screen behind Flomenbaum.

A monitor in front of Gatto and defense attorney Jeremy Pratt displayed the same photos.

Four contusions on the left side of her face created a parallel pattern. The pattern “would absolutely fit had it been a hand,” the chief medical examiner said.

“You could feel with your hand there was a ridge that did not belong,” Flomenbaum said of the right side of Chick’s head, where she had suffered “significant blunt-force trauma.” It had “a soft, spongy feeling.”

However, according to X-rays, she did not have a skull fracture. Instead, it was scar tissue from an older injury.

Assistant Attorney General Donald Macomber said police found a “head-sized defect in the drywall of Chick’s bedroom, with transfer of stain of her blood and one of her hairs embedded in the wall.”

The toddler’s right ear had contusions. Twisting and tweaking of the ear would cause the contusions, Flomenbaum said. Her right eye was deep purple and swollen shut.

Chick had “a classical swollen brain,” Flomenbaum said, which could be due to a lack of oxygen. Her brain showed signs of a hemorrhage.

After looking at the cells of the thymus gland under a microscope, Flomenbaum could tell “(Chick) had been under stress for a long time, we are talking weeks to months,” he said.

The girl’s distended stomach did not show evidence of external bruising, and neither did the abdominal wall, Flomenbaum said, though the pancreas was lacerated.

“The blunt force had to be something that would not leave a mark … something like a slow, squeezing force could absolutely do this and leave no marks,” Flomenbaum said. Later, he said the force would be “more than the normal amount of force that should ever be used with a child or anybody else.”

Flomenbaum estimated the fatal injury had occurred between one to 12 hours before Chick died. The actual time of death is not known, only the declared time of death – 5:43 p.m., Dec. 8, 2017.

After Flomenbaum, the second person to take the stand on day two of the trial was a witness for the defense.

Dr. John Spencer Daniel III, a forensic pathologist, completed his own report on Chick based on case records, including Flomenbaum’s autopsy report.

Though Gatto’s defense team has not made its opening statements yet, Daniel needed to testify Tuesday due to his availability.

Daniel said if he had done the autopsy himself, he would have run a test on the head of the pancreas, where the laceration occurred. If the test had come back positive for iron, it would have shown that “the area of injury that was sampled was at least a couple days old. Depending on how positive it was, it might be at least three days old or later.”

Daniel was not able to pinpoint the time of the injury, however.

“These are impossible questions to answer the way I know people would like for them to be answered. We can’t put a time clock on these things. We can only give generalizations,” he said.

Pratt asked Daniel for his opinion on whether Chick was abused.

“I think that she was,” Daniel said.

Starting the second day of the trial, Assistant Attorney General John Alsop went through a call log, photos, and text threads from Gatto’s phone, seized the night of Chick’s death.

A photo dated Aug. 8, 2017 showed Chick with a swollen nose, purple bruises around one of her eyes, and cuts.

A Sept. 14, 2017 text message from Gatto to her fiance, Stephen Hood, read: “I’m so (expletive) done with this kid. She’s been running around this house in her princess shoes and fell right into the coffee table.”

Maine Superior Court Justice William R. Stokes will determine the verdict, as Gatto waived her right to a jury trial in August 2018.

Chick lived with her grandfather, Hood, and Gatto, her primary caregiver, at 19 Crickets Lane in Wiscasset. The Maine Department of Health and Human Services placed her in the home in January 2017.

According to Gatto, Chick was only going to stay at the home briefly due to legal issues involving her mother, but Gatto has essentially raised her since she was 8 months old.

The Lincoln County News will continue to publish daily updates on the trial.