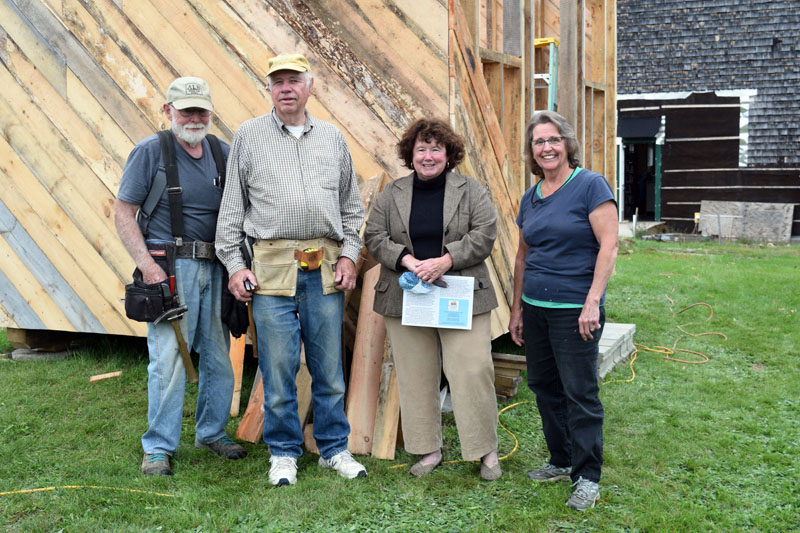 With the Whitefield Library one permit away from officially opening its newly renovated space, preparations have begun for the library’s Fall Festival on Saturday, Oct. 23.

Whitefield Library Association President Sue McKeen described the pandemic as a mixed blessing for the library. Despite the immense challenges of COVID-19, being forced to close the library in 2020 provided the association just the opportunity they needed to embark on the journey of practically rebuilding it.

“It’s been hard for us to raise money just like every other place… It’s been hard because we couldn’t open. So it’s been a challenge, but we’ve been really lucky, and these guys and those guys and all the volunteer help that we’ve had over the last couple of years, it’s saved us,” McKeen said.

Over the course of the summer of 2021, volunteers installed a new porch, clapboards on the exterior walls, and are in the middle of building a new storage shed behind the library.

The association plans to finish shingling on the south side of the library and install a new emergency exit stairway from the second floor before the year is out.

After operating a summer library out of the former Arlington Grange, the association bought the building atop the hill on Grand Army Road in 2019.

The yellow building was constructed in 1884, and served as a school and town hub for many years. Needless to say, renovating such a historic structure and bringing it up to code was destined to be an immense, and messy, undertaking. 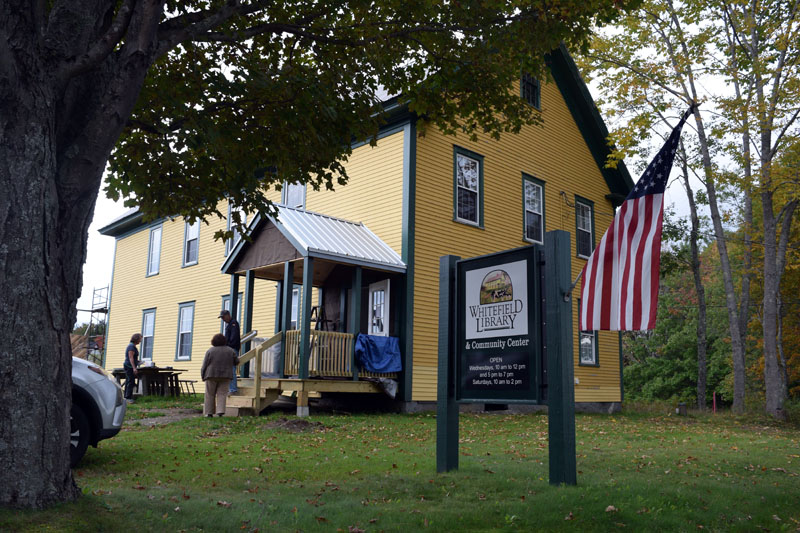 The Whitefield Library and Community Center was originally built as a community hub in 1884. With the majority of the first floor renovations complete, the library association awaits a permit from the Maine Fire Marshal’s Office to once again welcome the community back to the historic site. (Nate Poole photo)

The retired community members quickly became the Whitefield Library’s volunteer task force for the labor that would otherwise completely empty the nonprofit’s pockets if it were performed by contractors.

“The Geezer Gang has put in almost 20,000 hours, and that’s about $90,000. That’s on site… they do an awful lot off site,” Joslyn, who also serves as the association’s vice president, said at the library.

This past June, the Geezers were recognized by the town with the annual Spirit of America Award for their volunteer efforts.

On the morning of Sept. 28, two members of the gang, Erik Ekholm and Dennis Merrill, were working on the storage shed, which they expect to complete by the end of the week.

“At least we work cheap. Not fast, but cheap,” Merrill said.

Merrill said that he, Ekholm, the Joslyns and other volunteers typically work about three days a week, and sometimes they can be found at the library all week. Asked why he decided to dedicate so much of his time to the library, Ekholm responded with good-natured irreverence. 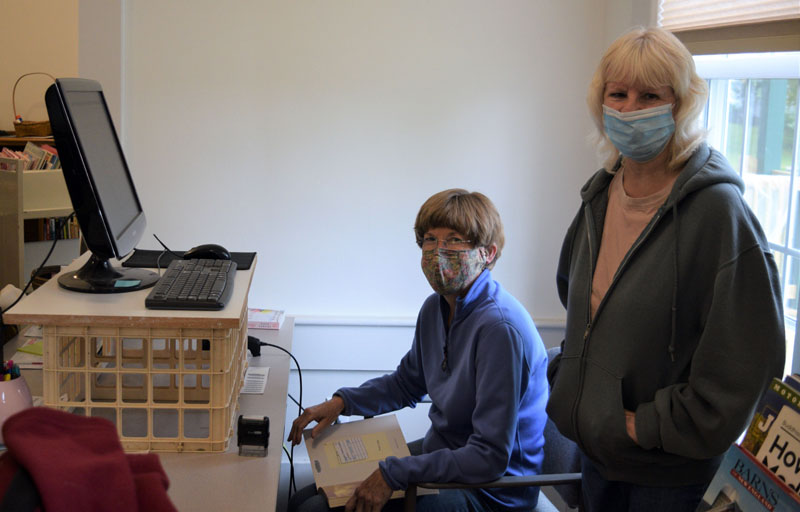 Whitefield Library volunteers Pat Parks and Jane McMorrow were at the library on Sept. 28 working on the digital catalogue of over 6,000 books stored on the new shelves. (Nate Poole photo)

“I’m bored. I have nothing else to do,” he said, eliciting chuckles from Merrill and Joslyn.

However, the Geezers only represent the tip of the Whitefield Library’s volunteer effort. A small group of equally dedicated individuals were tasked with cataloguing the library’s 6,000-plus book collection.

Pat Parks, one such volunteer working with Jane McMorrow in the library on Sept. 28, said she got involved with the library with McKeen through the Women of Whitefield group, of which they are both frequent attendees, back when the library began in 2017.

“It really shows you what just a couple of people feeling one way about something (can do), if it’s something that enough people care about,” Parks said.

In an email, Joslyn made a point to call out the various contractors that provided the association with services at discounted rates, including their carpenter, architect designer, engineer, electrician, plumber, building materials supplier, lawn maintenance person, lawyer, and surveyor.

“Yes, they give us their billing, but we know they could ask for and get so much more for their time and services,” Joslyn said in her email.

Despite the major accomplishment of finishing the first floor library, that only marks Phase 1 of the association’s renovation plan. Phase 2 will encompass the renovation of the library’s second-floor community center space, replete with a stage and new support beams holding up the freshly painted floors. 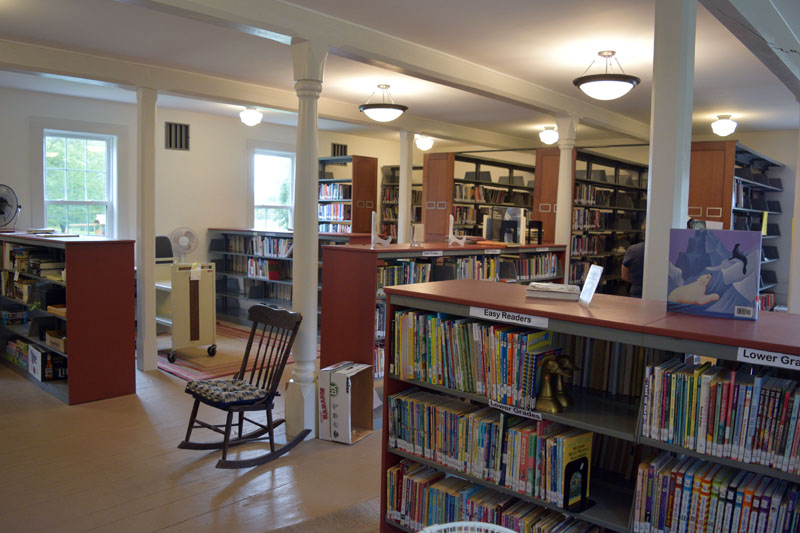 With the library newly insulated and a new heating system installed, Joslyn said they are going to try and keep the operation going through the winter for the first time, so long as they are able to afford the heating bill.

Other requirements to meet this goal include opening the library for at least 12 hours a week and hiring at least one librarian full time or on a stipend, two goalposts that Joslyn believes are well in reach.

The Whitefield Library Association will host its Fall Festival on Saturday, Oct. 23. Fall Festival is an annual fundraiser put on where families can enjoy pumpkin painting, farm animals, and music by Rusty Hinges.

Patrons will also be able to purchase bulbs, books, food, and the library’s calendar, which features images of Whitefield by local photographers.

In the case of rain, the festival will be held on Saturday, Oct. 30.

Additionally, the Whitefield Library could be open to the public by late October, as it is now only waiting for a building permit from the State Fire Marshal’s Office. The opening will mark the first time since the fall of 2019 that members of the public will be able to check out a book.

For library and event updates, visit the Whitefield Library Facebook page, and to donate visit whitefieldlibrary.org.