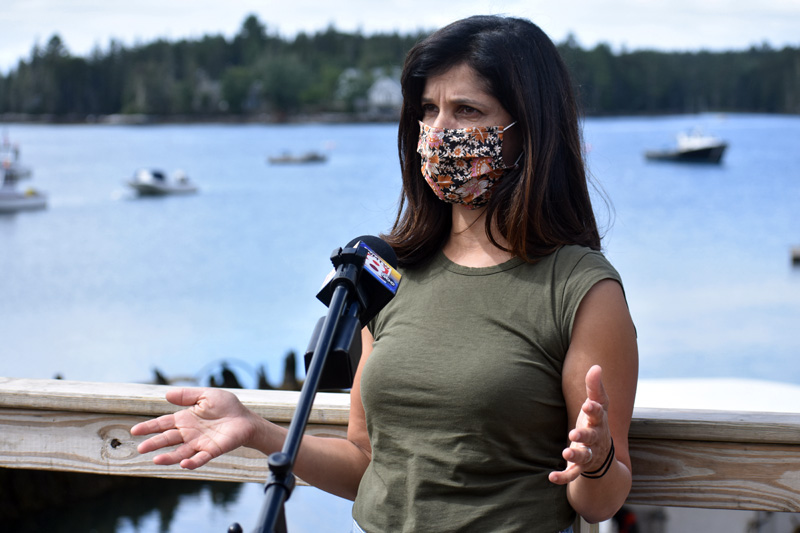 After an easy victory in the Democratic primary July 14, U.S. Senate candidate Sara Gideon made the Bremen waterfront her first campaign stop as the party’s nominee.

Gideon, of Freeport, is the speaker of the Maine House of Representatives. She will challenge four-term incumbent U.S. Sen. Susan Collins, a Republican, in the fall.

On Wednesday, July 15, Gideon met with lobstermen at the Bremen Lobster Pound Co-Op and went out on the fishing vessel Four of a Kind with lobsterman Shannon Harvey and his family.

Harvey told Gideon that restrictions on fishing gear related to right whales, as well as plans for offshore wind development, are just two of the challenges facing the Maine lobster industry.

Gideon acknowledged challenges to the industry and the stress that tariffs imposed by the Trump administration and pandemic-related restaurant closures have had on lobstering in Maine.

“All of that leads to an industry that is under a lot of stress and we want to think about how and what we can do to make a difference in Washington,” Gideon said.

According to Gideon, although the Maine fishing industry received $20 million as part of $300 million in the Coronavirus Aid, Relief and Economic Security Act for fishing-related businesses, many Maine fishermen have yet to see any of those funds.

“Over and over again we have had to pick up the pieces where Washington and Sen. Collins have failed us. We definitely need to figure out what we can do to help lobstering and fishing communities in Maine,” Gideon said.

According to Will Simons, press secretary for the Gideon campaign, Bremen was chosen as the first stop on her general election campaign because of the importance of the lobster industry in Maine.

“Sara is running to represent all Mainers and she wants to go where they are, listening to them to find out what their needs are. Lobstering is a huge part of the commercial fishing industry in Maine and she wanted to see firsthand the challenges they are currently facing,” Simons said.

Of the transition from a primary to a general election campaign, Gideon said her message has remained consistent from the start and she is running to be a senator for all Maine residents.

“I’m not just reaching out to Democrats, but independents and Republicans too. We have to work together to get things done and I have always been convinced of that, and I am looking forward to the next 3.5 months of the campaign,” Gideon said.

Gideon also answered a question about $4 million her campaign plans to accept in money raised through crowdfunding after Collins’ vote to confirm Brett Kavanaugh to the U.S. Supreme Court in 2018.

The funds were promised to whichever Democratic candidate emerged from the primary.

“Sen. Collins made the decision to confirm Justice Kavanaugh to the Supreme Court and people had their chance to express their opposition to this decision,” Gideon said.

After the event in Bremen, Gideon traveled to Augusta to meet with veterans about access to health care and to Brewer to meet with volunteers and participants in an opioid addiction recovery group.