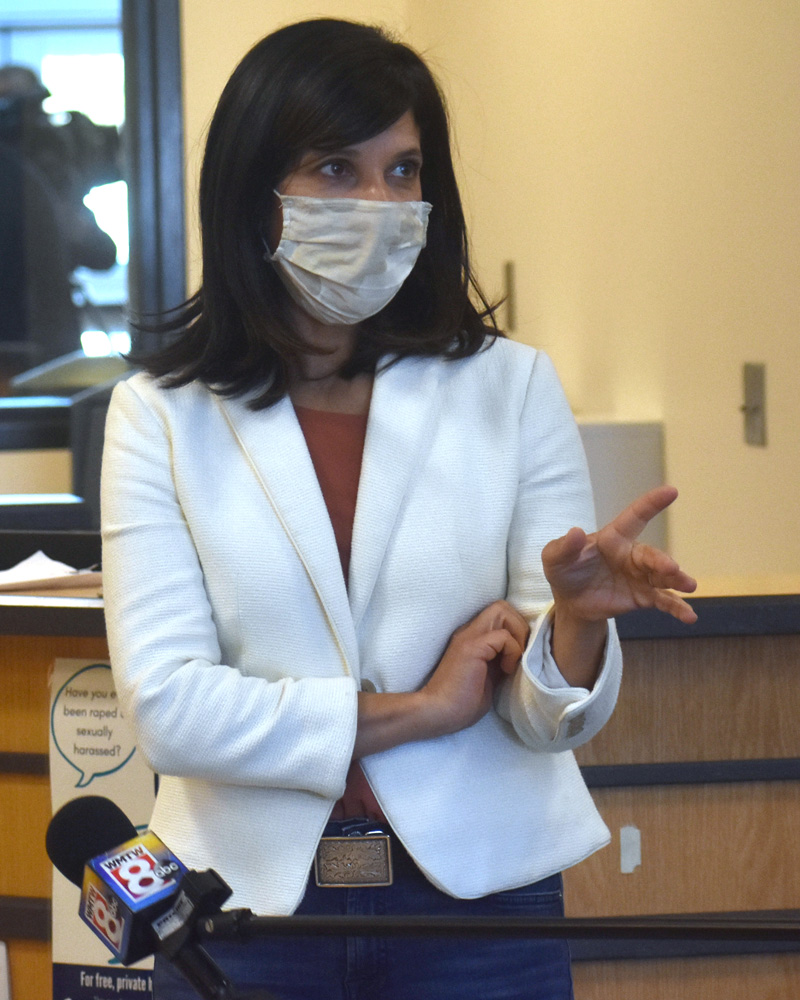 During the tour, Gideon spoke with inmates and learned about the jail’s medication-assisted treatment program. The program seeks to treat addiction among inmates and facilitate their successful reentry into the community.

The tour was not open to the press, but Gideon spoke in the jail’s lobby after the tour. She expressed support for the jail’s efforts and said such initiatives are desperately needed in rural Maine.

“It’s a way to support people where they are, help support them in their recovery. The necessary support for these programs doesn’t exist everywhere, especially in the rural areas of the state,” Gideon said.

Gideon said that while the Maine Legislature has expanded access to addiction treatment and prevention programs, the federal government can increase its support for these efforts through additional funding.

“I think the fact of the matter is the federal government needs to do more to make sure no one falls through the cracks, to ensure a full recovery and good health for these individuals,” Gideon said.

“We need to treat the opioid crisis like the public health issue it is, and Lincoln and Sagadahoc counties are leading the way in providing the kind of treatment and support individuals in recovery need,” Gideon said.

Brackett said the 1-year-old program is critical at a jail where up to 80% of the inmates have some experience with substance abuse.

“It may not be the nexus of why they are here, but it is something many of them have dealt with or are dealing with,” Brackett said.

Merry said the program allows inmates to interact with law enforcement in a positive way.

“Anecdotally, I know it has been successful. It really has allowed for relationships between inmates and law enforcement, to the point where they are talking about their personal lives with one another,” Merry said.

The program started in August 2019, with state funds covering each inmate’s participation for a full year, including support for their reentry into the community, according to Bailey.

Maine received $2.3 million in federal money to target opioid addiction and contracted Enso Recovery to implement a medication-assisted treatment program in county jails using these funds, according to Bailey.

The program also offers counseling to inmates and assistance with access to counseling once they leave the jail.

After the Two Bridges visit, Gideon was shuttled to Damariscotta, where she cast off from Schooner Landing for a tour of oyster farms on the Damariscotta River.

McKeen spoke about the history of oyster farming in the region and how the river’s oysters have grown world famous since the industry began in the 1980s. There are now about 10 farms on the river, he said.

Gideon asked about how the coronavirus has affected the oyster business.

Both McKeen and McPherson talked about a shift to online sales after COVID-19 arrived in mid-March.

McKeen said he has started running an online seafood market where customers can preorder, prepay, and pick up their items locally. He said many farmers have begun shipping oysters for the first time or ramped up shipping.

“When all the restaurants closed, the oyster industry started to panic, because where are we going to sell them? … So a lot of the farms started shipping oysters direct to consumers,” McKeen said.

McPherson talked about the “starter kit” he offers online. The $85 kit includes three dozen oysters, a shucking knife and glove, and a how-to-shuck postcard.

Glidden Point also offers the kit at its farm store, where customers can get oysters and beverages from a pickup window, then sit outside and shuck the oysters themselves.

When the tour ended at Glidden Point, the farm store was bustling, with customers eating oysters and drinking wine.

Gideon asked about the impact of climate change caused by greenhouse gas emissions and what could be done to help.

“If everyone agreed that climate change is the issue it seems to be, then that would be a big step,” McKeen said.

McKeen said one of the problems of climate change is the acidification of the water, which makes it harder for baby oysters to grow their shells.

Gideon, the speaker of the Maine House of Representatives, is the Democratic challenger to four-term U.S. Sen. Susan Collins, a Republican. Polls show the pair in a tight race, with most giving Gideon a narrow edge.