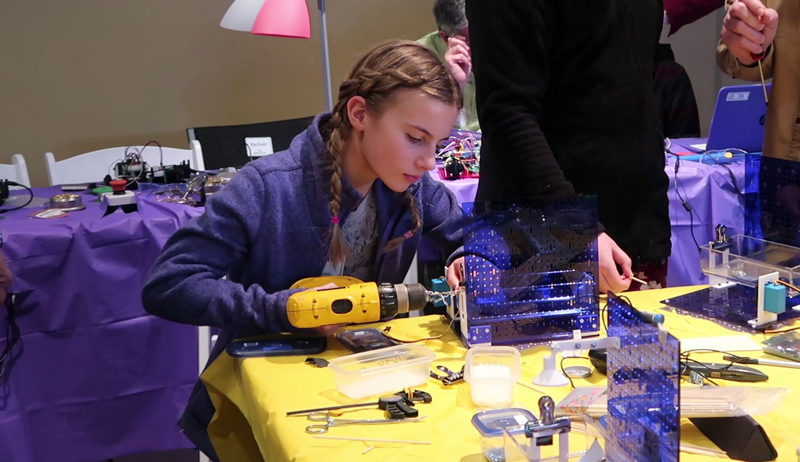 Arden Carleton, one of the student participants in this year’s Gizmo Garden program, uses a drill while creating her sailboat race gizmo. The 23 students each created a gizmo, and their creations were linked together to create a Gizmo Water Park. (Photo courtesy Judy Silver)

Twenty-three students from area schools demonstrated their engineering skills to a crowd of almost 70 people in the Porter Meeting Hall of Skidompha Public Library on Friday, Feb. 24.

The event was the wrap-up celebration of Gizmo Garden, a weeklong program started by Bill and Judy Silver in 2015. During the program, students learn engineering skills by creating “gizmos,” or robots. Each student is able to personalize his or her own gizmo.

This is the third year the Silvers, of Nobleboro, have hosted the program during February break. Each year has had a different project, starting with light-beam tag in 2015 and a parade of self-driving robots in 2016.

The project for this year was Gizmo Water Park. Each student created a water-based gizmo to be linked together for the park.

Judy Silver, the program director of Gizmo Garden, said extra preparation for the gizmos was needed this year, including a plumbing system to allow water to flow from one gizmo to the next.

“The extra trouble was worthwhile, because the students really enjoyed making fountains and spray jets and pools,” Judy Silver said.

The program was able to accept 23 students, up from last year’s 15, due to an increase in the volunteer staff, Judy Silver said. Jamie McGee, a Newcastle resident and assistant professor of electrical engineering at Southern Maine Community College in South Portland, was on hand during the week, as was Skidompha Library’s new gizmo educator and coordinator, Mike Lee.

Lee, known as “Gizmo Mike,” helped students test their gizmos in the water and troubleshoot. 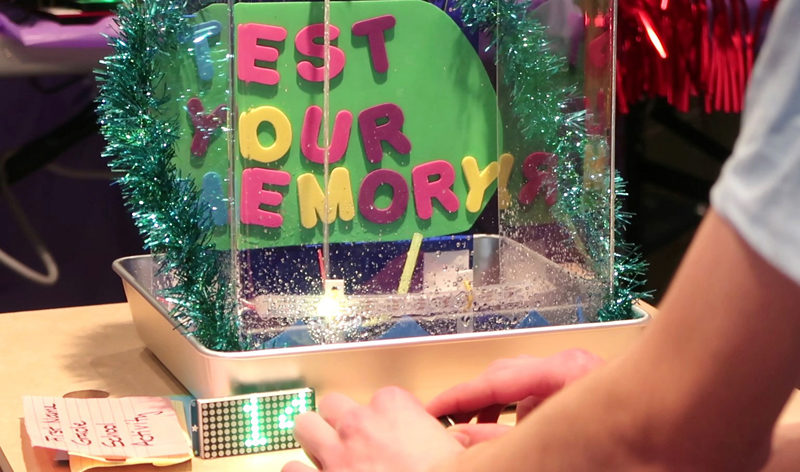 The Silvers’ favorite part of the program is the students’ creativity, and how the students continue to surprise them with new ideas.

One gizmo, created by Isobel Petersen, plays the musical notes from the song “Under the Sea” when the user hits targets with its water jets.

Forest Holbrook created a memory game. Participants have to memorize a pattern and repeat it using water spray. For each pattern successfully completed, the next string would get longer.

At the end of the week, students completed a survey about the program. One of the questions asked the students what they learned about themselves during the week. The results ranged from “I love coding” to “I’m not as scared of meeting new people as I thought.”

The students also got to weigh in on what they would like to see for the program next year, with many requesting a program with fans or moving air around, Judy Silver said.

While the Silvers ponder what the program will look like next year, Lee is planning technology programs at Skidompha for the spring and summer.

“Next week for us is a few weeks of rest!” Judy Silver said.

For more information about Gizmo Garden, go to gizmogarden.org or find Gizmo Garden on Facebook.