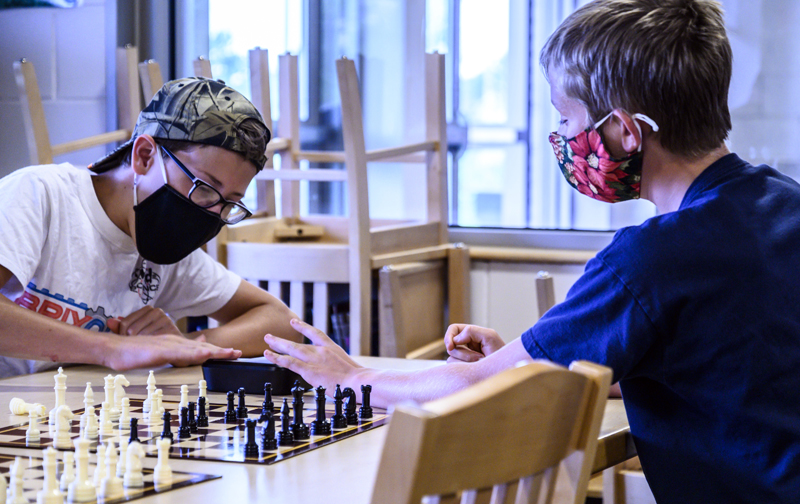 Trevor Hall , 12, (left) and Cooper Powell, 11, play a timed match during a chess club meeting in Jefferson on Tuesday, Aug. 3. The two engaged in a playful “super speed round” with only 30 seconds on the clock. (Bisi Cameron Yee photo)

Shayla Pheng was interested in playing chess but she couldn’t find a game.

Her mom Andrea Pheng looked as far away as Augusta and Portland, but couldn’t locate a club that met regularly in person. She decided to start a chess club in Jefferson so her daughter could play.

She got permission to hold meetings at the library, bought six chess boards, and advertised the club with fliers near the game table at the Jefferson Market and General Store.

The first meeting was June 1. The club developed a core of regulars who attend every Tuesday, with a series of rotating players dropping in week to week.

Some people attend the chess club to play casually, some come to learn. 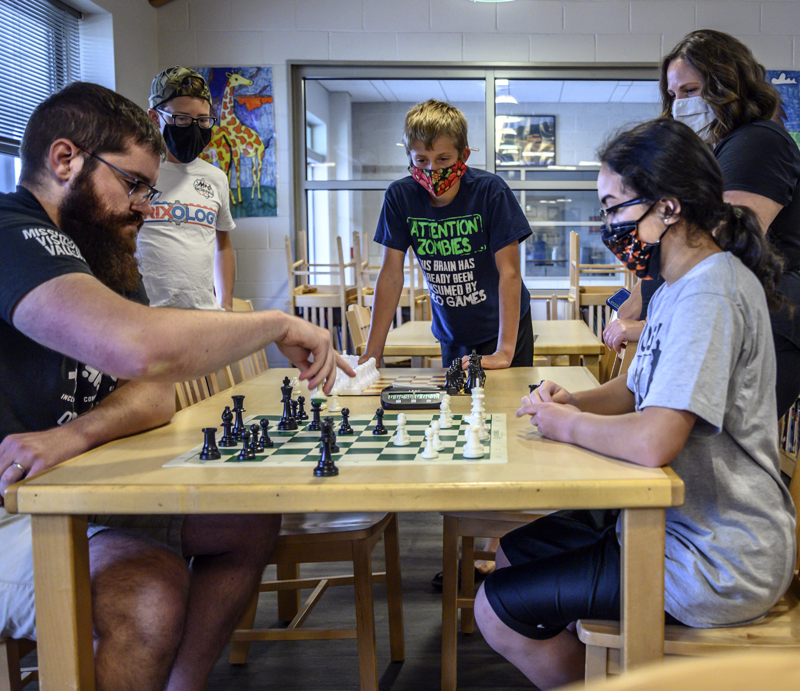 For Shayla, chess has become a passion.

She started playing chess on chess.com during the pandemic. She’s played for eight months and learned enough to be a fairly formidable opponent. She reads books on the great players, watches chess movies, and studies strategy.

Shayla is an acknowledged introvert, but she is comfortable with kids she knows from school and her confidence blossoms with a chess piece in her hand.

Trevor Hall said he first came across a chess board at camp. “I want to learn,” he said immediately and played his first game with his mom. She won.

Jana Hall said her son loves chess, but doesn’t get a lot of time to play with people who know the game.

“It gets him off the electronics and socializes him with other kids,” she said.

Cooper Powell said he hasn’t been playing long. He picked it up from his father who played in high school. He thought it looked interesting.

Hall and Powell started a new game and a stream of chatter rose above the smack of palms hitting the timer on the chess clock. 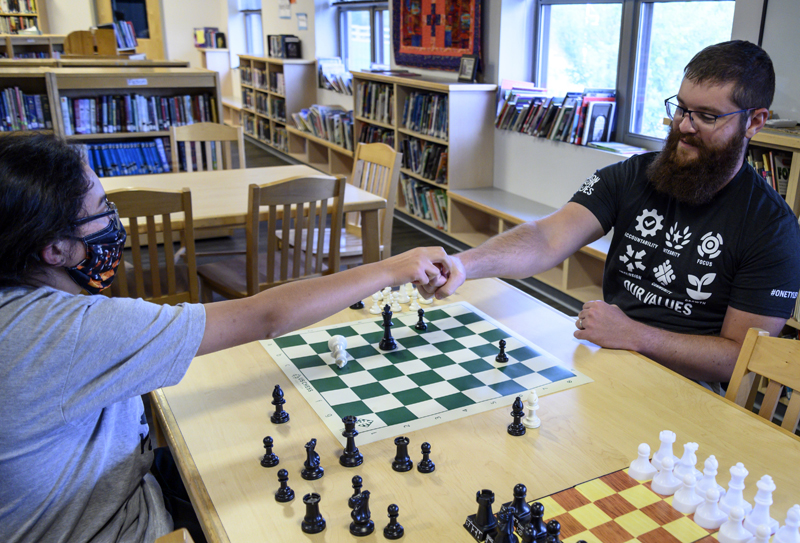 Shayla Pheng, 11, (right) congratulates Jeff Merckens after being checkmated during a chess club meeting in Jefferson on Tuesday, Aug. 3. The white king is tipped over on the board to signify the loss. (Bisi Cameron Yee photo)

“What’s that? (pointing) It’s a distraction!”

“Congratulations on wasting your time as the clock winds down.”

“You’ve only got six minutes left.”

“Sometimes they do 30 seconds,” Shayla said. And indeed the next game was a 30-second rapid fire round of swift chess moves with frantic slaps of the clock.

“Chess can be stressful or peaceful,” Hall. “We choose to make it stressful.”

Jeff Merckens recently moved to Jefferson from Augusta. He played the game in high school and had an uncle who was the chess coach at Erskine Academy in China, Maine. He enjoys introducing the kids in the club to some of the strategies of the game. 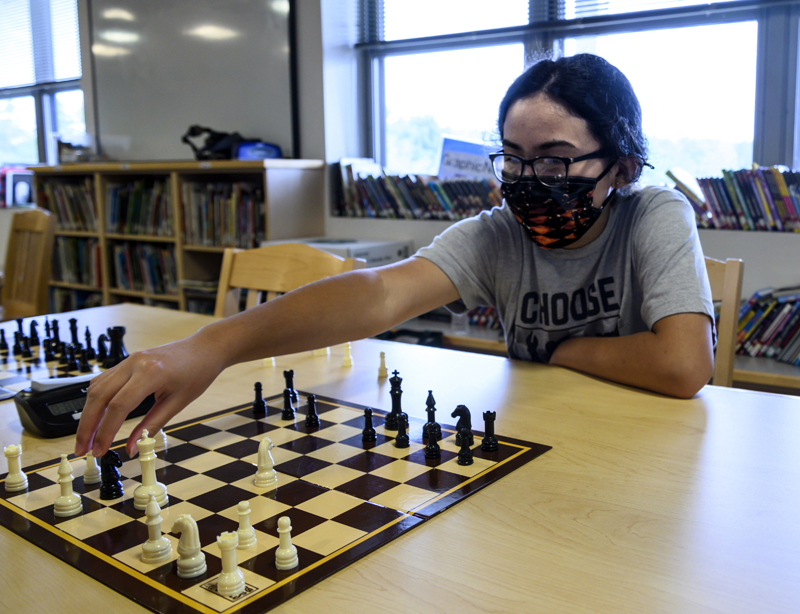 Shayla Pheng, 11, threatens the opposition’s king during a chess club meeting in Jefferson on Tuesday, Aug. 3. Pheng has been playing for eight months and has a 1,200 rating at chess.com (Bisi Cameron Yee photo)

“I like games I can study and really improve – chess is one of the extremes of that, there’s such a huge spread of skills,” he said.

According to Andrea, when her daughter plays Merckens its more competition-forward.

“She beat him the first time she played him,” Andrea said. “She allowed him to teach her once he beat her.”

At the end of the meeting, Andrea and Shayla pack up the boards and push the chairs back into place. Merckens tucks chess pieces into the carrying case for his roll-up tournament board.

Next week will bring another meeting, another game, another challenge. And Shayla will be there. 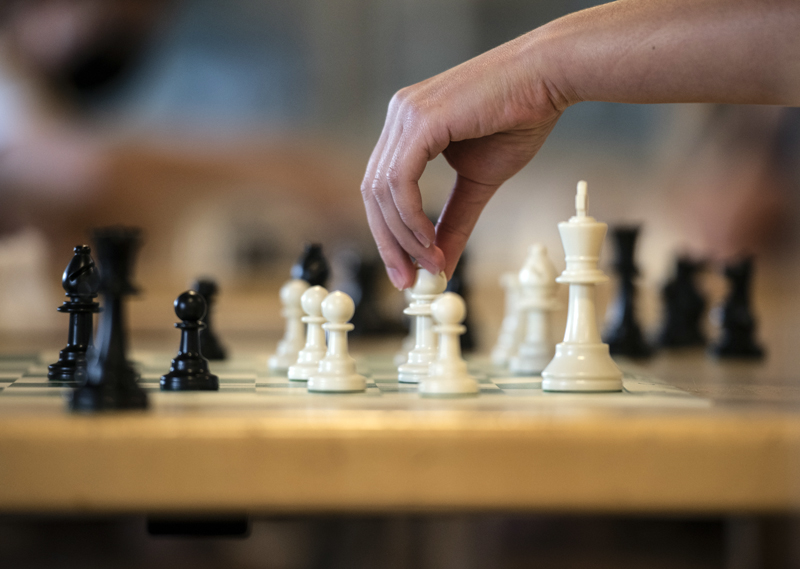 A white bishop goes on the attack during a chess club meeting in Jefferson on Tuesday, August 3. The club meets every Tuesday and is open to all ages and skill levels. (Bisi Cameron Yee photo)

“She never does not want to come. She starts to pace with excitement, said Andrea. “She normally likes to stay home, she loves to read. But this gets her outside her shell.”

Andrea wants to build the club. She said it’s open to anyone who is interested – all ages, all skill levels, and all schools. Surrounding towns and summer residents, too.

“It’s a good way to get kids together,” she said. “Especially since so many kids have been home schooled over the last year.”