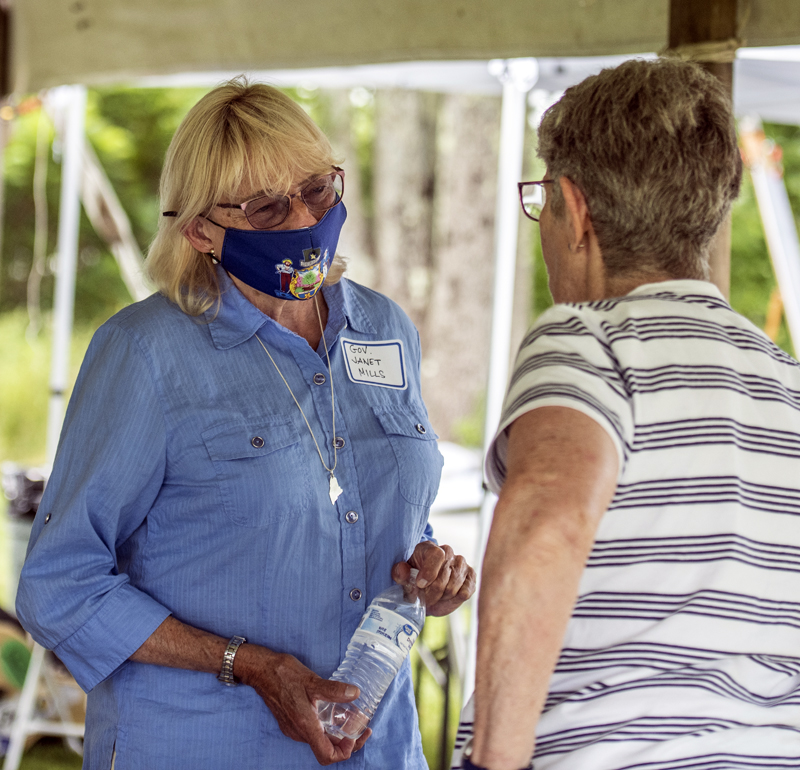 “I never dreamed I’d be the governor to ban weddings … and close bars. Nobody wants to be that governor,” Mills said of her tenure during the COVID-19 global pandemic. She thanked her administration, Maine citizens, and Lincoln County Democrats for their support during an unprecedented time.

The committee made a last minute decision to strongly encourage masks for all attendees, even though the lobster bake took place outside.

Autumn Mahoney, committee secretary, said the recommendation went out with confirmation emails in the week leading up to the event.

“With Delta (COVID 19 variant) numbers up a bit, we thought it would be a good idea,” she said.

Kilkelly welcomed guests with stories from her 16 years as a Lincoln County representative and senator before passing the microphone to Natasha Irving, district attorney for Maine Prosecutorial District 6, which includes Lincoln, Knox, Waldo, and Sagadahoc counties.

Irving thanked supporters and shared her office’s accomplishments to bring restorative justice practices to District 6, as well as doggedly pursuing charges in domestic violence cases, and supporting and protecting victims of sexual assault through the criminal justice system.

She was followed by Sheriff Todd Brackett, who announced that he will be running for Lincoln County sheriff again.

He described a “tough couple of years for law enforcement.”

“No one ever asked me for my use of force policy before (the civil unrest of 2020),” Brackett said, adding, “I can’t be effective if you don’t trust what I am doing, or what my officers are doing.”

Brackett shared that he is forming a Sheriff’s Advisory Committee to bring understanding to the community about the role of law enforcement and the work officers do.

Final opening thanks were given by County Commissioners Mary Trescot and Bill Blodgett.

Johnson offered a moment of silence for all those lost to COVID-19, and then announced the picnic was about to be served.

Jeff Hurd of The Narrows Tavern in Waldoboro provided both catering and the Cider Hill Farm site for the event. The menu included lobster, mussels, corn-on-the-cob, hot dogs (both vegan and meat), watermelon and a non-alcoholic beverage.

The luncheon was followed by another round of short speeches that began with Maine Speaker of the House Rep. Ryan Fecteau, HD 11.

“Lincoln County is competing for my heart,” he said, explaining that York County where he grew up in Biddeford will always be near and dear.

Fecteau went on to enumerate the many successes of the past legislative session, including 55% funding for education, 5% revenue sharing for municipalities, $40 million in funds for Land for Maine’s Future, and $50 million for state parks, among other highlights.

“This has been the most transformative legislative session in decades,” he said. “We achieved a laundry list of victories that are going to change Maine forever.”

On her way to another engagement, Maxmin jumped in to say a quick thank you to guests. She introduced her rescue dog, and shared that the puppy’s name at adoption was Chloe, too. Maxmin changed it to “Little Chloe.” The initials are LC, just like the county, although Maxmin said she spells it “Elsie.”

She was followed by Crafts, Hepler, and Stover, who each expressed their thanks and shared their successes.

Crafts highlighted her work on the Marine Resources Committee, including shark research and aquaculture. “It’s grassroots constituent efforts that make the difference,” she said.

Hepler seconded that sentiment, acknowledging “a lot of constituents with a lot of good ideas” who inspired her work last session. Legislation included recreational lobster licenses for veterans and a $6,000 tax credit for young attorneys who practice in under-served areas of the state.

Stover announced she will seek re-election. She shared her commitment to child and adult mental health, and said, “I want to make sure the resources are there to take care of our sons and daughters.”

Vitelli was set to close the program. She said the last legislative session reminded her of the rules of the classroom she instilled in pre-schoolers at Jefferson’s Head Start program many years ago.

“Be kind, take turns, and share your toys,” she said of the personal understanding, technical challenges and innovations required as the government conducted business during the global pandemic.

Vitelli echoed Fecteau’s remarks that the last legislative session was transformative. She emphasized that three budgets were passed, including one that met the basic needs to keep the state running in March, a supplemental budget in June, and a plan for spending American Rescue Plan funds in July.

She handed the microphone to Gov. Mills as guests rose with applause.

“It was a wonderful surprise to have the governor make an appearance. I think her presence galvanized the group, especially her relaxed manner, good humor, and her vision of the future for the state… Should she decide to run, I know that I’m ready to work hard for her re-election and that the Lincoln County Dems look forward to a spirited campaign next year as we make our case for Democratic ideals,” Geoff Bates, LCDC fundraising chair, said in an email on Tuesday, Aug. 10.

“We had a fabulous turnout – quite close to 200 guests – and the weather held, which had been one of my only real concerns,” Bates said.

In a cutline for a photo that appeared with the story Roy Miller, of Somerville, was incorrectly identified as Ron. The Lincoln County News regrets the error.)