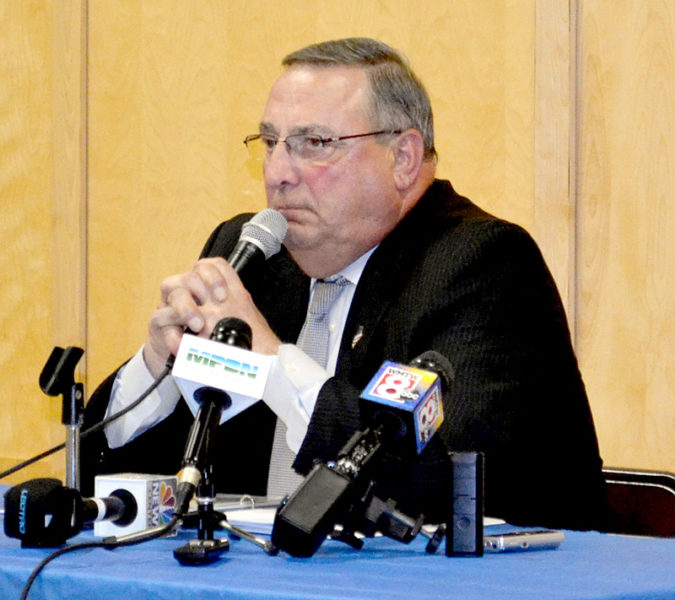 While LePage said he “doesn’t see anything good” about the effort to legalize the recreational use of marijuana, he also said it was not for him to decide. “I leave that one alone,” LePage said.

The effort to increase the minimum wage will benefit only a small percentage of the population, yet increase costs for everyone, LePage said.

Ranked-choice voting is a “convoluted system,” he said.

LePage called the effort to institute a 3 percent surcharge on individual income over $200,000 “a terrible tax” that would continue to drive professionals, which Maine already has a shortage of, out of state. The surcharge would be earmarked to fund public education; however, LePage said public education costs could be reduced by cutting administrative costs.

Maine does not need more than 100 superintendents, as many superintendents are responsible for fewer students than some high school principals, LePage said. Maine’s public education system would be more efficient and more funding would reach classrooms if the number of superintendents in Maine was reduced from the current amount of more than 100 to 25, he said.

LePage’s comments on public education funding came one day before Attorney General Janet Mills said her office would pursue legal action against the LePage administration for allegedly violating the open meeting law. In April, the public was denied access to the first meeting of the Commission to Reform Public Education Funding and Improve Student Performance in Maine.

“It’s a waste,” LePage said of the pending action. According to LePage, the greatest penalty for violating open meeting laws is $500. Taxpayer dollars would cover the cost of the attorney for the commissioner of the Department of Education and the fine, LePage said.

If Maine wants to expand background checks for gun sales, it will need to change the Constitution, which states clearly that the people’s right to bear arms shall not be infringed, LePage said. LePage compared the murder rate of Chicago, which requires universal background checks, to the murder rate in Maine to back his argument that the ballot initiative would do little to increase safety in Maine.

“The majority of murders in Maine are a result of domestic violence, so do we stop marriage?” LePage said.

The November election “is a big one,” LePage said.

“Elections have consequences,” he said. “There are winners and losers. For the last 40 years, Maine has been a loser.”

LePage placed blame for the gridlock in Augusta squarely on the shoulders of Democrats, who, LePage said, “will work with no one.”

Democrats have promised to block his initiatives solely because they do not like him, LePage said.

“The Democrats are gone,” LePage said. “What we have now are progressives, socialists. I’ve heard other names for them too.”

LePage encouraged voters to “vet the candidates” and “hold their feet to the fire” in elections, which LePage said typically do not go well for Maine’s Republicans.

Maine’s Legislature was dominated by Democrats for nearly 40 years before the 2010 election that brought LePage to office and also turned control of the House and Senate over to Republicans. Democrats regained control of both houses in 2012, but Republicans retook the Senate in 2014.

As LePage zeroed in on the issues facing voters in November, he reiterated his core platform and proposed solutions for the problems facing Maine, which he said the Legislature has been unwilling to address for 40 years, and remains unwilling to address.

High tax rates are leading to an exodus of corporations from Maine, and under what he calls the “death tax,” citizens are literally being taxed to death, LePage said. However, efforts to reduce taxes are blocked by the Legislature, which brands them as tax breaks for the rich, LePage said.

Energy costs in Maine continue to soar, due to a Legislature that continues to tout wind and solar, despite the higher-than-market rate of the electricity produced, but does not support hydropower, natural gas, and nuclear energy, despite their low cost, he said.

Wood is one of Maine’s primary natural resources, LePage said, yet Maine has one of the highest costs for wood in the country. LePage pointed to the lack of penalties for violations of the tree-growth tax break, which he said is just a property tax break. There is no enforcement of the requirement for harvest management plans for land in tree growth, LePage said.

The Boothbay Harbor town hall meeting was organized as part of LePage’s ongoing campaign to communicate directly with his constituency, rather than rely on media outlets, which LePage said are biased against him.

Less than 30 people were in attendance at the meeting. Media representatives composed the majority of the audience.