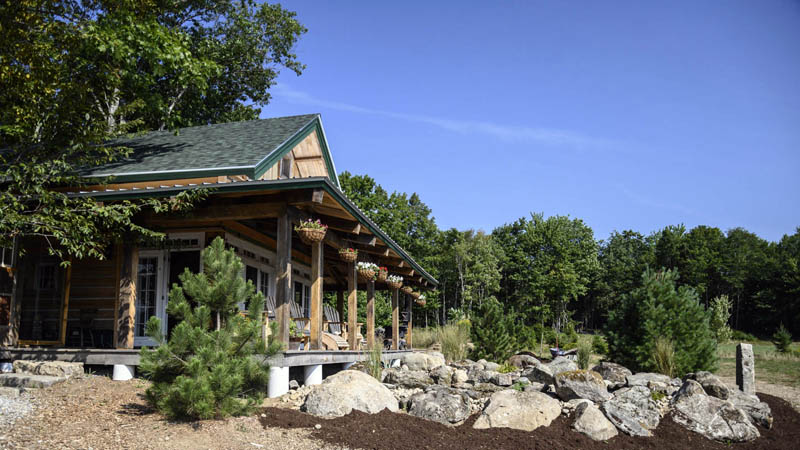 A parade home emerges from the forested section of a property in Waldoboro on Aug. 21. The home was designed to exist in concert with the land it is built on, making use of the natural resources of wood and stone found on the lot. (Bisi Cameron Yee photo)

Grand Cabin East is a design built home that was conceived and crafted as a “parade home” by Waldoboro builder C.J. Turner. Parade homes are built to showcase innovations in the art of homebuilding and this one does just that.

Located at 216 Washington Road, Waldoboro, the newly completed home will be open to the public for the Labor Day weekend and Turner looks forward to sharing his ideas on sustainability and reuse with the larger community. “What we’ve done here can be emulated,” he said.

The neo-rustic home is modeled on the Montana/Adirondack style, according to Turner. He sees the design as an example of integration with the natural landscape.

Much of the wood used in the build was sustainably harvested from the property. Turner said he was careful not to damage the woodlot, avoiding clear cutting and siting the home in such a way that it harmonized with the trees rather than intruding on them.

There is no lawn on the property. Three acres of meadow at the front of the house will continue to exist as a wildlife habitat and the remainder of the 12.7 acres will remain wooded.

The landscaping around the house is based on xeriscape principles that eliminate the need for irrigation. Most of the hardscaping is constructed from stones found on the property.

The house itself is 2,500 square feet with 21 foot high ceilings in the open concept living space. It has three bedrooms and three bathrooms as well as a partially enclosed outdoor shower.

The interior of the house glows with its varieties of rich wood detailing. The exposed beams and posts are white pine; the diagonal supports are red oak. The horizontal paneling consists of red or white pine boards and hemlock boards fill the ceiling over the Corinthian granite fireplace. Rustic log bucks frame the windows. Circular segments of sawn logs built into the wall feature birch and moosewood, pine and beech. That wall detail was not part of the original plan; it was a way to creatively showcase the wood grown on the lot.

“There’s not one square inch of drywall in the home. It’s made of wood, rock, stone, concrete, glass, and metal. Those are the core materials, all natural materials,” Turner said.

According to Turner, the original design was “smaller and simpler.” As opportunities arose the plans changed. An additional three feet was added to the height of the house and the primary living space was expanded by 10 feet to accommodate a set of doors Turner obtained at no cost from a client who no longer needed them. The glass panels of those front-facing doors allow light to pour into the home.

Repurposed elements are another one of the driving concepts in the design, and as resources presented themselves Turner and his team pivoted to make the most of them. According to Turner that’s one of the benefits of a design built home. Decisions can be made on the fly, plans can be altered, unexpected opportunities can be taken full advantage of.

“It grew in artistic design and concept,” Turner said.”The level of detail is higher than originally anticipated.”

The home has a number of show stopping elements. The suspended staircase is a single stringer design with a combination of steel and wood working together to create something not seen every day. The cantilevered balcony is bolted into the beams at one end with no additional support. It seems to float above the main room.

The bed in the guest bedroom was built from a single branching log cut in half to make the sideboards, suspended from the ceiling with an antique pulley system, and secured with nautical rope and cleats. Turner called it “the unique bed concept that the house needed.”

The 70-foot long wraparound porch has a glass windbreak on one end with a fire pit and built-in seating. There’s a water feature in front of the porch that Turner added at the last moment. He’s designed and installed similar features over the years and said he enjoys the “delicate” sound of the fountain.

Energy efficiency is another hallmark of the design. The walls are layered with Rockwool and laminated polystyrene insulation which allows for a fairly high “R value,” or insulation rating, according to Turner. Turner estimated the house will have an R value of 32 or more with a typical home having a minimum R value of 19. The home has at least five layers of insulation including a one inch air gap. “It’s a tight house,” he said.

The slab on granite foundation and its perimeter are insulated and the on-demand heating system in the floor means it’s a warm house too. Heat is provided by three propane tanks with a backup wood stove and the large fireplace. The house is currently connected to the grid for electricity, but Turner anticipates adding solar arrays to the property at some point in the future.

A water collection system will capture 70% of rainwater from the roof and feed a 1,300 gallon underground cistern with both coarse and fine filtration to provide a water supply for landscaping and domestic use.

“We haven’t stopped,” Turner said, citing an “exciting synergy” as the team shared ideas and worked hard to bring the project in on time for the Labor Day opening. “It’s been a feel-good build for everyone.”

The home was sponsored in part by Sherwin Williams with Turner self-funding most of the build. He had a core six man team with lead craftsman Zach White, and his son Josiah being integral to the successful completion of the project. Zach White owns White House Lumber in Waldoboro and milled most of the lumber for the build.

Nick Lawrence built the fireplace and single handedly did the rock work on the chimney. “It takes heavy, hard work. It takes moving and stacking and hammering and pounding and running the bobcat,” Turner said.

Turner himself cut his teeth in the construction industry locally and out west. His business, Alpine Design/Build is currently taking on projects in the Midcoast area.

For Turner this house where he plans to live and work for the rest of his life was an opportunity for him to celebrate all he learned and the exposure he’s had to beautiful buildings throughout his career. He used that experience to build from the ground up “this very unique home.”