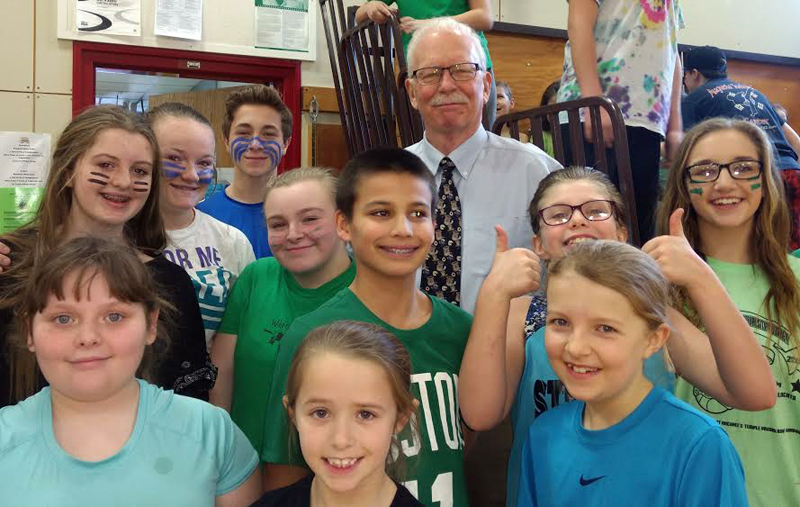 Whitefield Elementary School interim Principal Tom Soule poses for a photo with students. “I think we have great days ahead of us,” Soule said. (Greg Foster photo)

Whitefield Elementary School interim Principal Tom Soule will put kids first in his time at the school, he said in a recent interview.

Soule started work Feb. 13. “The kids are really fantastic,” he said of his experience so far. “They all know me now.”

The Sheepscot Valley Regional School Unit hired the veteran administrator after the resignation of Principal Joshua McNaughton effective Jan. 31. McNaughton departed in his seventh year as principal amid criticism of the school and its administration.

Soule will stay at least until the end of the school year, after which a new principal will take charge.

Soule was the principal of Woolwich Central School for 16 years. He retired four years ago. He is certified as a superintendent, although he has not pursued a superintendent’s job. He holds two master’s degrees from the University of Southern Maine.

Soule sees much good in the school, the student body, and the staff, which he finds excellent and supportive.

One of the first measures he implemented concerns order in the hallways. He asked the children to walk, not run, in the hallways, and to keep in lines whenever appropriate. “The kids have really embraced that,” he said.

Soule described his style of administration as “fun, fair, and firm” and not adversarial. He said he wants parents to feel free to talk to him. “Whitefield parents have done a good job raising their kids,” he said.

Many good things that go on in the school go unpublicized, in his opinion, and he believes those things need to be out there to dispel any misperceptions of the school.

“There’s really not enough recognition for all the good things that go on here, good kids with a can-do attitude,” he said. “I like to catch them doing what’s right.”

Soule will seek to maintain those good things and make the public more aware of them.

Soule said school events, such as an awards assembly  to honor students of the month and a bus driver appreciation event, help create a positive school atmosphere and engender good relationships.

“Some staff members went to school here and now teach here,” he said. “That shows a lot of love for the school.”

Soule said he intends to work with the local PTA, which he hopes will regain its membership.

“I think we have great days ahead of us,” he said.