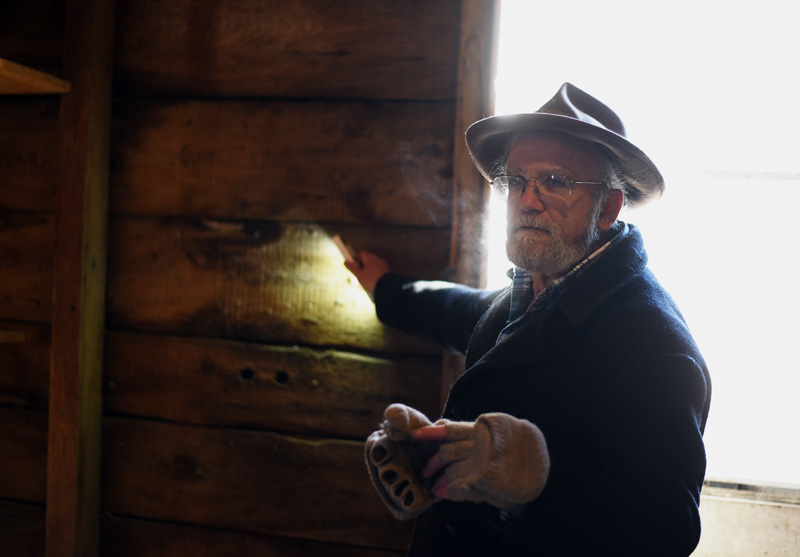 Phil Averill uses a flashlight to illuminate a wall of the old Pemaquid Mill during a tour Thursday, Jan. 17. The boards for the wall were cut with an up-and-down saw, he said. (Jessica Picard photo)

Over a dozen people attended a tour of the Pemaquid Mill property the afternoon of Thursday, Jan. 17, exploring the nooks and crannies of the 1800s building at Pemaquid Falls. The group then met to discuss next steps for the property, which will be in the care of the Old Bristol Historical Society.

Hammond Lumber Co. closed its location at the property, at 2089 Bristol Road in Pemaquid, in July 2018.

A group called Friends of the Pemaquid Mill formed to try and acquire the property, which has five buildings, including the mill building.

The group included the Old Bristol Historical Society, the Damariscotta River Association, the Pemaquid Watershed Association, residents of the town, and others. They met 16 times between July and December 2018.

The group launched a fundraising campaign with an original goal of $380,000 and was able to raise $415,000 from about 400 donors, according to DRA Executive Director Steven Hufnagel. 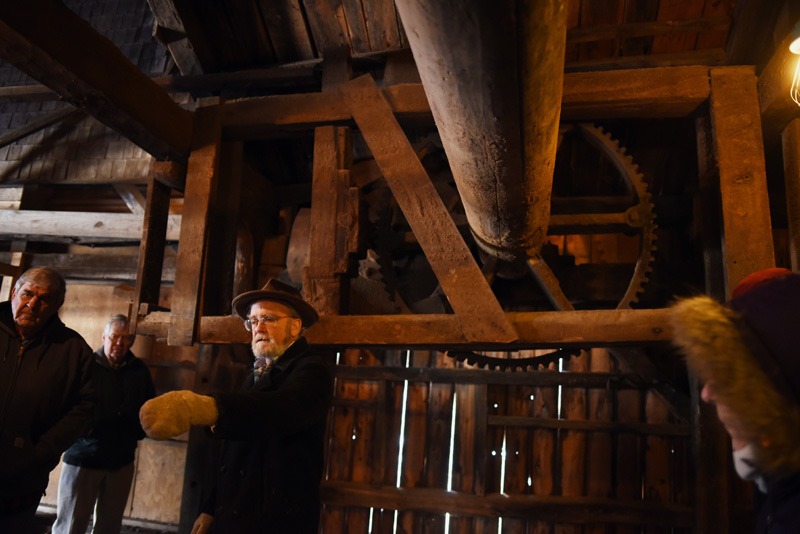 Phil Averill shows a tour group equipment from the 1800s-era Pemaquid Mill during a tour of the building Thursday, Jan. 17. (Jessica Picard photo)

The DRA now owns the property, which it will lease to the historical society for 99 years for $1, according to Hufnagel. The DRA closed on the property Dec. 21, 2018.

The funds not used to purchase the property will be used for its restoration, including $20,000 to remove traces of arsenic in the soil that had built up due to the storage of pressure-treated lumber, Hufnagel said.

Phil Averill, a member of the Friends group, led the tour into the three-story mill and showed how the wood used for the walls had been cut by an up-and-down saw, which was common in the 1800s. He explained how certain parts of the building had been added over time.

Averill said that while some history of the land and building is known, there are still mysteries to be solved, such as why there is plaster on the walls of the mill’s top floor.

“We’ve got a lot of work left to do to figure out what happened here,” he said. 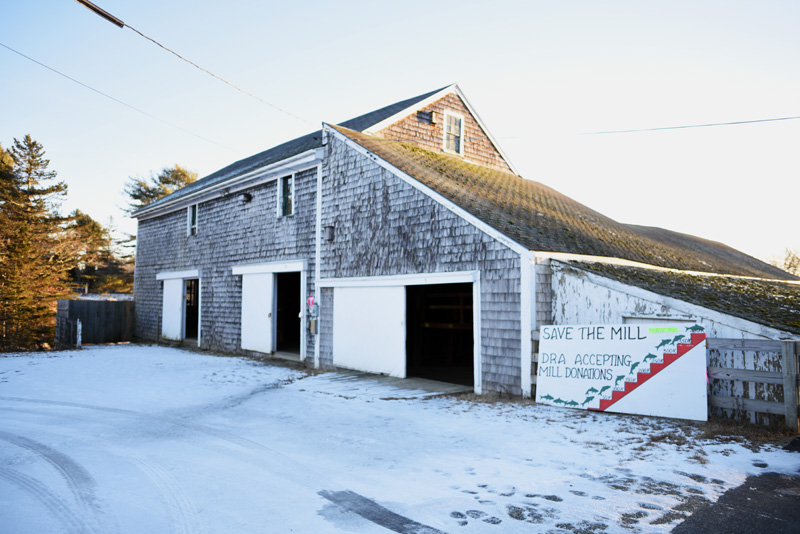 The three-story mill building at the Pemaquid Mill property. The Old Bristol Historical Society is considering potential uses of the building, including as a museum. (Jessica Picard photo)

According to a Nov. 15 article in The Lincoln County News by Neill De Paoli, park manager of the Colonial Pemaquid State Historic Site, the land was home to Native Americans for over 5,000 years and English settlers since the mid-1600s.

By the early 1650s, English families began establishing farms in the area, and research suggests they could have operated a sawmill or grist mill in the vicinity of the property, he wrote.

In the 1670s and 1680s, there was an outbreak of Anglo-Wabanaki warfare in Maine, and the settlers did not return to the Pemaquid peninsula until the 1730s.

In the early 1760s, Robert Given established a farmstead on the lot immediately northeast of Hammond Lumber, De Paoli wrote.

The three-story wooden mill probably began operating during the tenure of Capt. Thomas Miller, who purchased the Given estate in 1823. 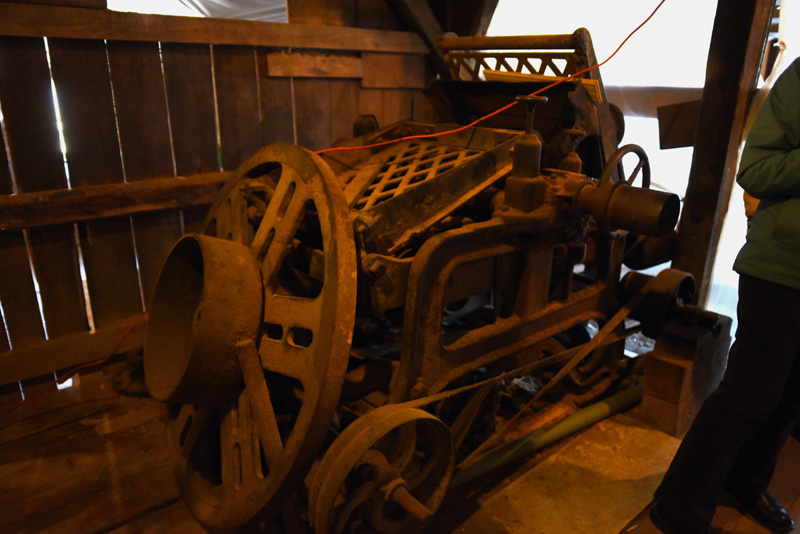 A planer from when the Pemaquid Mill was still in operation. (Jessica Picard photo)

The mill was powered by a cast-iron turbine, De Paoli wrote. The Given and Miller mill provided New Harbor and Pemaquid Falls farmers with a ready means of processing corn and wheat into meal and flour, and sheep’s wool into woolen textiles. Locals could have the mill cut their pine, spruce, and hemlock logs into firewood, lumber, shingles, and clapboards.

Miller’s successor was Oakman Ford, who operated a retail store as well as a sawmill, grist mill, and carding mill over the next 30 years.

Oakman Ford’s son, William P. Ford, assumed control of his father’s farmstead and mill after his death in 1865. William Ford partnered with William Boyd, his brother-in-law, to operate the mill during the 1870s and 1880s. During those years, the mill cut timber, such as pine, oak, maple, and birch, into lumber, shingles, and laths. The Ford mill also continued to mechanically card sheep’s wool for local farmers, according to De Paoli. 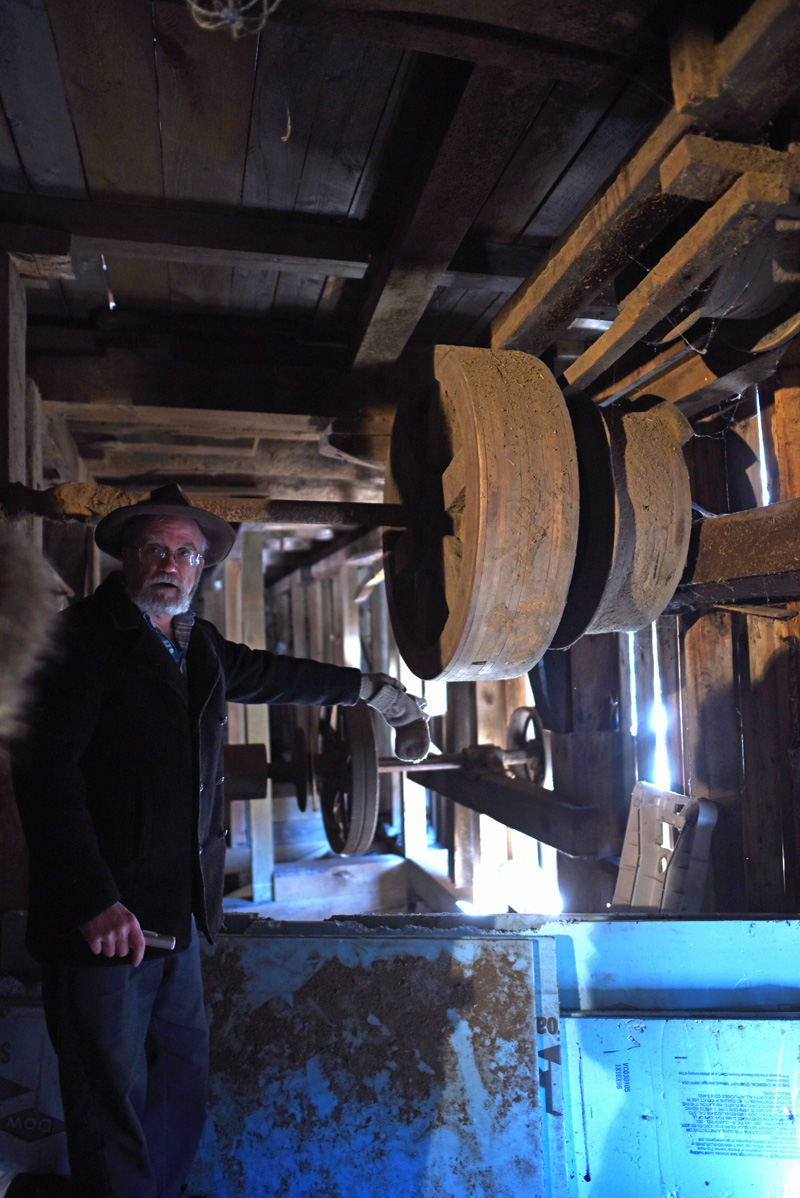 Phil Averill points out equipment in the basement of the mill. (Jessica Picard photo)

The property was most recently home to Poole Brothers lumber from 1923 until around 2010, then LaValley Lumber Co. and Hammond Lumber Co.

“The Pemaquid Falls mill remains an important icon of another time and place in Pemaquid’s and Maine’s past,” De Paoli wrote.

After the tour, there was a meeting to celebrate the purchase of the property and discuss what was to be done next.

“It’s been a very exciting time,” Averill said of acquiring the property. He said the meeting was a “monumental event,” because it meant the group was moving forward from the acquisition stage into the operational stage.

Averill said he considered the meeting to be the last of the Friends of Pemaquid Mill and the first of a new group: a committee of the Old Bristol Historical Society that will be tasked with molding the mill into whatever it is going to be. Averill will chair the committee.

“A plan does not exist yet,” Averill said. “There’s a lot of possibilities …Right now, it’s just a blank canvas.”

Some ideas that have been discussed for the property are a museum showcasing the history of the town, an office for the historical society, a climate-controlled storage area for the society’s archives, and a public park with a trail connecting to a nearby town landing.

“There’s a lot of museums in Bristol, but there is no ‘Bristol Museum,’” Averill said.

Bristol residents will vote at the annual town meeting on whether to give the Old Bristol Historical Society $9,500 toward the setup of its storage facility.

Margaret Brown, owner of The Art of Antiquing in Round Pond, purchased the building across the street from the mill and has agreed to allow a conservation easement on her property for public access along the riverbank, which could include a kayak launch, according to Hufnagel.

Averill said it has not been decided yet whether to maintain all five buildings on the property or to sell or take down some of the newer structures.

The new mill committee will form different teams to tackle different aspects of the upcoming project, according to Averill. The teams will be as follows: use of the mill building, history and archaeology, stream bank restoration, public access, public relations, and fundraising. Each group will meet independently from the main committee.

Averill said the committee’s meetings will be open to the public, and the committee would like suggestions on where the project should go next.

The group discussed how some improvements have already been made to the site, such as the replacement of stairs leading down to the bottom floor of the mill. 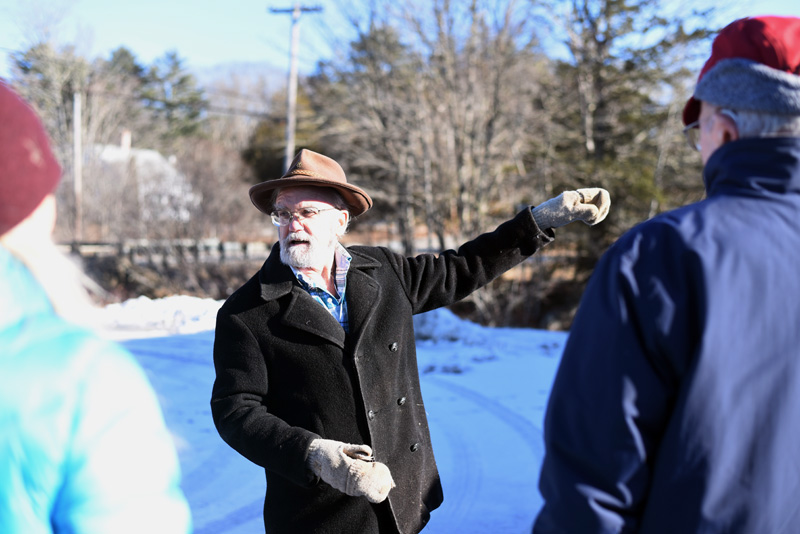 Phil Averill talks about the exterior of the mill building. (Jessica Picard photo)

Some steps will be to remove lumber racks added to the mill building in recent years, remove vines and poison ivy, and replace windows and the roof of the mill.

Averill said an application has been submitted to get the mill on the National Register of Historic Places, and the committee will be looking to apply for grants as well.

The group in attendance celebrated the mill’s purchase and its potential to become something special for future generations.

The group presented Averill with a book on mills that they had signed.

Belinda Osier, co-president of the historical society, said she thinks it was wonderful how the process had been a collaborative effort between many people in the town. 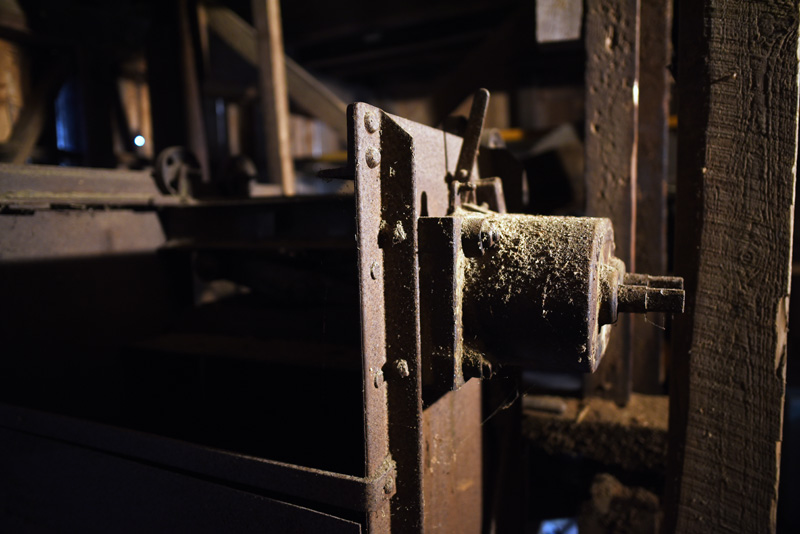 Old equipment in the basement of the Pemaquid Mill. (Jessica Picard photo)

Averill thanked Pat Porter, the chair of fundraising and publicity for the project.

“It wouldn’t have happened without her,” he said.

Osier said she hopes that the historical society having the mill will encourage people to donate items from Bristol’s past and will “promote historical sites of Bristol better.”

“We really see this as the gateway to the lower peninsula,” Porter said. “We hope it will become a real tourist attraction.”

“We can really celebrate the river,” Hufnagel said. “This is a place with real history and substance.” 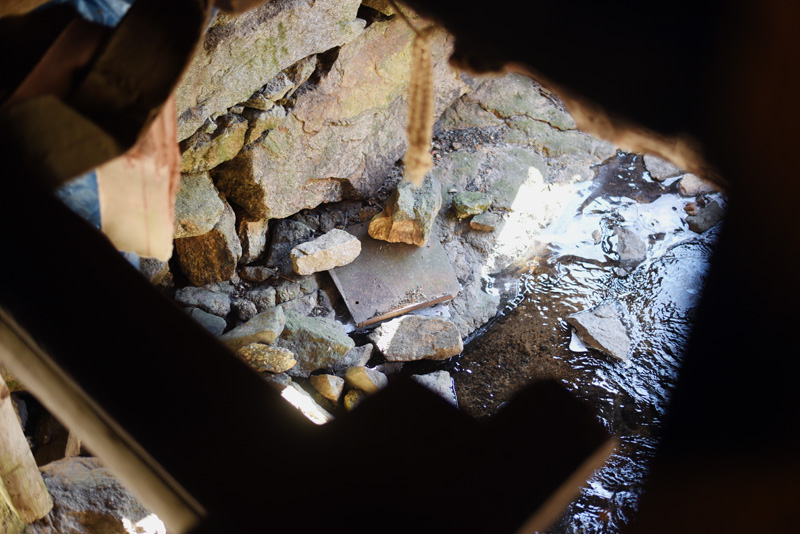 Bobby Ives, a director of the Old Bristol Historical Society, passed around paper cups and a jug of apple cider from The Carpenter’s Boat Shop in order to make a series of toasts. He read a letter from a Connecticut resident familiar with the mill’s earlier days. The historical society will interview the writer to gain insight into the mill’s history.

Ives then offered a toast to everyone in attendance and involved in the project, saying “here’s to us all.”

He next toasted their great-great-grandchildren, whom he said will be proud of the work their ancestors had done when they celebrate the centennial of the project in 2119.

Lastly, Ives toasted to “the journey before us.”

Donations for the mill project can be sent to the Old Bristol Historical Society at P.O. Box 87 in Bristol, with a note saying they are for the mill.